Origin of Name:   The Český Fousek is a Czech breed of versatile hunting dog that was traditionally and currently used to hunt, point, and retrieve. 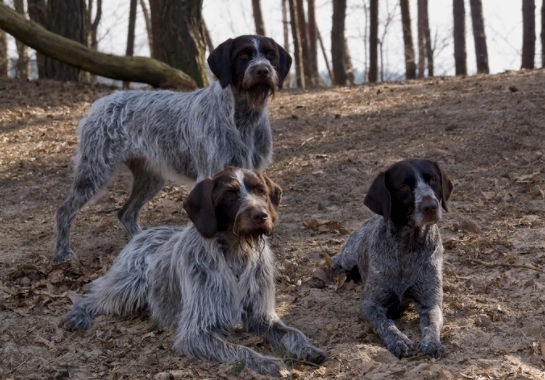 Cesky Fosk; The Bohemian wire-haired pointer Griffon, the Czech thick-haired pointer, the Slovakian wire-hair pointer, and the Rough-coated Bohemian pointer are called a member of the water dog type. Among the heritage of the aristocracy, water dogs have enjoyed a long and great history and have been a valuable hunting companion in Europe for centuries, and remain so in modern times.

In the land currently known as the Czech Republic, there existed an ancient kingdom called the Kingdom of Bohemia. It is here that the Cesky Fawkak breed will see its origins. Ancient paintings have been found depicting Bohemian wire-haired pointer and by the Middle Ages, the Bohemian Empire had a Hunting Dog, known as the Bohemian Water Dog. In these times, the Bohemian king and the emperor of Rome were the same. The young ruler, Charles IV, was educated by a man named Willem Zajic. Zajic wrote a letter that would be an early reference to the Cesky Fawkak breed. He wrote: ""In 1348, Emperor Charles IV presented Marrad Ludwig von Bredenberg as a number of capable Hunting Dogs called Canis bohemicus.""

In these early times, Canis bohemicus was the only wire-operated Hunting Dog in Europe, and it is therefore believed that the breed may be the producer of this canine type. A later reference to the early Cesky Fosk type was made around 1724, in a book called Der Volkomine Toothsche [Deutsche] Jäger (""The Complete German Hunter""). This two-volume encyclopedia was written by Johann Friedrich von Fleming, and describes a type of dog, not necessarily a specific breed when it mentions a thick-haired pointer from Bohemia that is primarily Se was used for the work performed in water.

Although a reference to Bohemia with a dog, with thick hair and a particular talent for waterworks has been seen throughout history, the Cesky Fosch breed was not clearly recognized until 1883, when Joseph Willem Serny of Hunters Wrote Huntsmanship-Handbook and Hunting Friend. Cerny describes a Czech rough-haired dog and specifically identifies it as being a pointer. This is the first such reference made from the Cesky Faulk. Cerny called the dog in his book ""Cesky Ohr"".

The term ""fosk"" was not used until three years later, when it is found in a Czech registry of purebred dogs. At that time, thick-haired pointed dogs were called phosxes. Fousek is derived from the word ""fousy"" which means facial hair / mustache and is a reference to the body texture of the breed. Later that year, a group of hunters and breeders of rough-haired pointer from Bohemia would form a club to breed. They would call it ""Society for Rough-Haird Pointer-Cesky Fosk-Off located in Pisek, Czech Kingdom"". This would be the first use of the combined name Cesky Fosk.

At this time there was a lot of inbreeding among Hunting Dogs; Therefore the breed of early Cesky Fosk was of a greater type than the pure breed of dog. Despite this fact, the breed was highly valued by hunters in their homeland, as well as hunters in countries around Austria and Germany. Overtime, the Cesky Fosk would become a popular hunting companion throughout Europe. Prior to World War I (WW I), the Cesky Fosk was the most commonly used wirehead indicator dog in the Czech Republic region, which is now the Czech Republic.

Cesky Fosk has a nice and strong look, designed for strength and endurance. It is described as a beautiful breed with a distinctive appearance. A medium-sized dog, the Cesky Fawkak breed presents a notable difference in size between its male and female members. Male dogs (Cesky fusca) stand at the crevices of 24 to 26 and weigh about 62–75 pounds, while female dogs (Cesca fusca) weigh from 23 to 24 . The Cesky Faulk has debonier facial accessories common to wirehair breeds, making it appear respectable and intelligent.

The head of the Cesky Fosk is elevated and is thin and long; Angular with domed skull and a slight stop. It appears square in shape when viewed in profile due to whiskey and sidebuns. The ears of the Cesky Fawkak are wide at the base, but gradually narrow into round tips that are close to the dog's cheeks. Eyes are set deep on the face with eyelids that fit tight and completely surround the eyes, the eyelids are gray / black. Cesky Fosk's almond-shaped eye colors are dark amber or darker; They display a kind, bright and somewhat vivid expression. The muzzle is slightly arched at the bridge, long and gently towards a dark brown nose which is near the broad and sensitive nasal. The lips of the Cesky Fosk are well developed, with the top lip hanging slightly above the bottom. The jaws are evenly separated and meet with scissors bites.

The neck is moderately long and high on the shoulders of the Cesky Fawkak. It exhibits strong muscles and a slight arch. The neck moves into a strongly sloping shoulder blade and straight foreleg. The bent back is squat but firm. The body of the Cesky Fosk is well-developed, with a deep chest that reaches the dog's elbow with oval ribase with well-sprung ribs and elongated sternum. Viewed from the front, the chest exhibits a lyre shape. The slopes and slopes are reasonably small, but wide and arched. The stomach is only slightly tucked in; This is to assist the dog in movement and should add leanness to the overall appearance of the dog. The hindquarter displays a long pelvis with good angles shown in the hind legs. The upper thighs are wide, with thin, thin and small crossings. The tail is set high, and the level of the top line is gracefully visible. Traditionally, the Cesky Fawkak sports a docked tail. Being a water dog, Cesky Fosk has webbed toes that are well-arched. Dog pads are adequate and thick, and should be completely pigmented. The overall appearance of the foot should be condensed and shaped like a spoon. The color of the toenails should be gray or black. When the dog is alert, the Cesky Fosk stands tall on its feet.

Cesky is a double coat sport of the Fawak breed, common among water dogs. The supple undercoat is short and thick, while the outer-coat is snug and stiff, ranging in length from about one to one and a half . Long hair may also appear in some areas of the body of the Cesky phallock that are straight and too thick to the touch; These areas are topline, flanks, shoulders, and front-chest. The legs of the Cesky Fawkak have longer hair feathers than the front of the back legs. The hair on the dog's head is shorter in areas such as the scalp, forehead, cheeks and ears. The breed features a signature coat; The mustache and beard that it is known for. Cesky Fosk is named for the feature because it displays long, soft hair around the lips and chin, as well as long eyebrows that are bristly and pointed upwards. The Cesky Fawk coat can come in a variety of colors; Brown or solid brown, with or without brown spots, white markings on chest and legs.

This breed is kid friendly, apartment friendly and is a low drooler

Cesky Fousek is a dog that is accustomed to working in the farm, and is therefore a low-maintenance breed for grooming. The dog's coat is relatively short and is only of medium size. Regularly brushing the coat with a firm bristle brush will help remove any loose or dead hair from the thick coat. The coat of Cesky Fawkak is naturally weather proof; Therefore, unless necessary, the dog should not be bathed as this bath may clog the oils that provide this natural weatherproof quality. Wiping the dog's coat with a cloth or chamo will help distribute the coat's natural oils and make it shiny.

Cesky Fosk is often found working in the area as a hunter; If this is how you intend your dog to exercise, make sure that the breed has dried properly after each excursion if it gets wet because they may be susceptible to extreme cold weather and freeze them. Should not be used. In addition, the feet should be checked and cared for regularly if the toenails should be trimmed if not worn down sufficiently through use. Cesky Fosks have hanging ears, and should often be checked for excessive moisture, dirt, or infection in the ear area. Any excess hair that grows in the ear canal should be removed.

As with all dog breeds, the diet and exercise requirements of the dog should be noted; Along with the care and care of its eyes, teeth and nose areas to ensure cleanliness and to prevent infection or other health concerns from developing.

The Cesky Fosk has been carefully banned for decades to ensure its health and hunting abilities. Because of its focus on dog ancestry, Cesky Fosk evolved into a strong and hearty breed. There are currently no serious health problems that have been recorded for the Cesky Fawkak breed and these dogs live an average of 12–15 years. Ceska Fouska often has a size of 5 to 7 puppies. Although no serious condition has been reported, the Cisky Foske breed is known to experience the following: