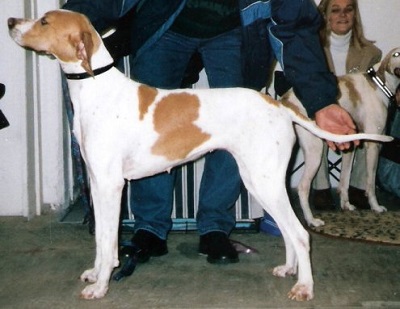 The indicator is of a Gundog breed native to England. While most major kennel clubs refer to this breed as a pointer, it is commonly referred to as the English pointer, and some kennel clubs officially recognize it by this name. The pointer is not a versatile Gun Dog, and is highly efficient in just one task. However, it is generally considered the highest indicating breed, and historically has been one of the most successful breeds in field trials. The pointer is so popular as a Working Dog dog in some parts of the United States that it is sometimes referred to as a bird dog.

The breed originates from Spain, although their history is somewhat mild. The history of the breed is believed to date back 3000 years, for the reason that dogs were recognizable as early pointers on the walls of Egyptian tombs. In France and also in England, paintings from the 17th century and 19th-century bronze figures were found depicting this breed.

Point-type breeds are said to have been known in England since the 1650s, yet it is believed that, in 1713, at the end of the Spanish Succession War, officers of the British Army accompanied these pointer hunters from Spain to England. came back. Pointers were originally used in combination with greyhounds in the 17th century. Later, Italian pointers found their way to England, and they crossbirded with a Spanish pointer leading to the pointer as we know them today. Another theory suggests that breeds such as foxhound, bloodhound, greyhound were also included in the breeding process, and later different habitats were added to the pointer, resulting in breed elegance and grace, speed and endurance, unbelievable odor. -Capacity and beautiful appearance. easy maintenance. Finally, he created a magnificent Hunting Dog, which became a favorite of many aristocrats and capitalists in England, thanks to his equal disposition, friendly and affectionate behavior towards children and their owners.

The pointer was a term to describe any type of Hunting Dog that used the signaling technique when hunting. In the days before the Rifles, British pointing dogs hunted together with hunter dogs. The pointer’s duty was to find and signal the victim, in collaboration with the footpaths that followed. With the rise of wing-shooting in the 1700s, the pointer became a dedicated and durable gundog. Two of the best-known British pointers were Juno and Pluto, owned by Colonel Thornton, who was said to have held a point on a part covey for more than an hour. The story takes into account Old English jokes about a hunter who loses his sign on the mines, then a year later, he finds his dogs as skeletons pointing to the skeleton of a bird. After the invention of the guns, hunter methods changed, the pointer was taught to be “”stationary and shot from the wing””. This technique meant that the dog needed a stoostil after the bird was fired, and by the time the gun was fired, the hunter had to wait for instructions to retrieve the bird.

Until the Civil War, America was not indicated between 1861 and 1865. In 1876, a lemon and white colored pointer named Sensation was imported from America to England. This breed was one of the first nine breeds registered in the US in 1878 and was recognized by the AKC (American Kennel Club) just after it was established in 1884.

The pointer is mainly restricted to the Sport Eiffel; He must watch nonchalantly and participate. The ideal specimen gives an immediate impression of compact strength and agile grace; Head well, proudly done; Manifestation intelligent and cautious; Muscular body with both living power and dash. Here is an animal whose every movement is a wide-awake, hard-driving dog with stamina, courage, and a willingness to let go. And in his expression there is loyalty and devotion to the true friend of man.

This breed is easy to train, does not shed and requires minimal grooming

The English Pointer requires minimal grooming. Seasonal flea treatment is required, but a dog’s shearing by a professional groomer is not necessary. The ears and eyes should be cleaned occasionally to avoid infection. If you don’t have the time, skills, or money to care for a high-maintenance dog, the English Pointer is one of the best options. Highly recommended for beginners.

English pointers are very easy to train. They easily trace the relationship between commands and actions.

The athletic, prolific pointer is a very active sports breed and requires a lot of exercise every day to keep it healthy and happy. This can come in the form of long daily walks and vigorous play sessions with their boss. Providing a securely stained yard, where the pointer can walk all over and burn some of its famous “hunting all day”, endurance is beneficial and will make for a quieter, more satisfied companion indoors. The breed also practices mind and body to participate in canine sports such as field events, obedience, tracking, agility, rally, and other activities that can be enjoyed by the dog and owner.

The pointer should perform well on high quality dog ​​food, whether it is commercially manufactured or prepared with the supervision and approval of your veterinarian. Any diet should be appropriate for the age of the dog (puppy, adult or senior). Some dogs are at risk of being overweight, so watch your dog’s calorie consumption and weight level. Treatment training can be an important aid, but giving too much can lead to obesity. Know which human foods are safe for dogs, and which are not. If you have any concerns about your dog’s weight or diet, check with your vet. Clean, fresh water must be available at all times.

English setters are usually healthy dogs. Responsible breeders screen their breeding stock for health concerns such as elbow and hip dysplasia and deafness. The breed may experience bloat, sudden, life-threatening abdominal conditions, and owners must learn what signs to look for and what to do. Ears should be checked regularly for signs of infection.