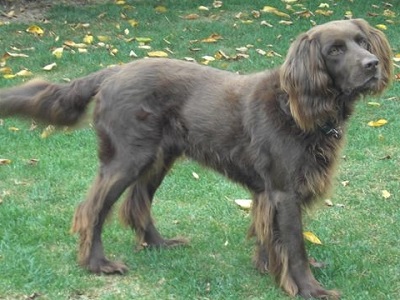 German longhired pointers are a Gun Dog and as such, they are expected to search, point, track and retrieve the game. They can excel in all types of hunting situations: waterfowl hunting, searching for up-game birds, or reclaiming foggy game in North America, usually in the woods or praises of rabbits and squirrels. He has an uncanny ability to be able to reach from a quiet domestic pet to an avid, passionate hunter. Having been reared for hunting for over a century, they are a superior and tried hunting companion.

The German Longheard Pointer (Deutsch-Langhaar) is one of the continental pointers and connects a bird-, hawk- and water-dog as well as the bloodline of Bracken (Scunthounds). Therefore, they have scope for great versatility. Many dogs of the Langhaar type can be seen in European oil paintings and copperplates featuring hunting, which are used by the hawk before the adventurous gun hunt. The first kennel associations were founded by breeders in the 1870s. Since 1879, pure breeding has been done and the main characteristics of the breed have been established. In 1897, Baron von Schörler wrote the first standard for German longheads and, thus, laid the foundation for today’s pure reproduction.

The German longhair pointer is similar to other pointing breeds, and in general to most longhaired gun dogs. The German Longhair Pointer is a medium to large breed. German Longhaired Pointers are a very athletic and lean breed, and generally weigh slightly less than would be expected for a dog of their height. However, it is a sturdily built dog. German Longhaired Pointers are a generally well proportioned breed, although they tend to be slightly longer than they are tall. The chest of this breed is relatively broad. The German Longhair Pointer’s tail is traditionally docked to about 40% of its natural length. However, this practice is falling out of favor and is actually banned in some countries. The natural tail of this breed is of medium length and is carried either straight or in a slightly saber-like position.

The head and facial features of the German Longhair Pointer are mostly average. This is because exaggerated features are detrimental to a dog’s ability to work. The head and neck of the German Longhair Pointer are proportional to the size of the body, although somewhat narrower. The head gently merges into the muzzle, which is approximately the same length. The muzzle itself is quite long and deep, which makes room for a lot of odor receptors, and is large and strong enough to carry large birds. The muzzle is wide enough, and gradually rises up to stop with the nose. This increase is more pronounced in men than in women. The nose itself is large, either black or brown, depending on the color of the individual dog. The ears of the German Longhair Pointer are of medium length, and hang down. When noted, the breed’s ears are folded, but otherwise flat. The eyes of this breed are medium sized and almond shaped. The overall expression of this breed is intensity and friendliness.

The coat of the German Longhair Pointer is as would be expected from the name, but rather long. It is a double-coated breed, with a long, dense and soft undercoat and a slightly longer, thicker and slightly oilier outer coat. This coat provides the breed with additional protection from cold climates and harsh vegetation such as thorns. The hair of this breed is usually slightly longer on the underside of the tail and on the back of the legs. The hair on the ears and head is the longest and softest. The AKC and UKC differ on what colors are allowed in German Longhair Pointers. Both clubs allow this breed to be solid liver, liver and white, liver and white tick, liver speckled and white tick, and liver roan. The UKC, but not the AKC, allows them to be solid black, black and white, black and white tick, black spotted and white tick, and black roan. The UKC also allows tan markings on any dog, but the AKC does not.’

This breed is prone to health issues and allergies. Is not apartment friendly

The German longhair requires regular maintenance, especially if it is hunting through various terrains and heavy cover. His long coat attracts bursa efields, which may require trimming to remove, and the base of his ears is prone to developing knots. When hunted in a heavy cover, its entire tail can develop friction. Otherwise, the occasional brush and bath will keep him looking his best. Her nails can be trimmed, if necessary, with a nail clipper or grinder to avoid overgrowth, splitting, and breakage. Her ears should be checked regularly to avoid the formation of wax and debris, which can lead to infection. The teeth should be brushed regularly.

With good breeding, German longhead pointers are eager to please, intelligent and very trained. They have a high energy and, therefore, require a lot of attention and exercise.

GLP is, in fact, high energy with good breeding and has tremendous hunting drive and desire. They require adequate amount of exercise and attention and live in the homes of avid hunters. They are not suitable for occasional hunts. In addition to hunting, other options for exercise may include playing time in the backyard, preferably being fired, or taking a walk several times a day. Other outdoor activities such as swimming and hiking can provide a good outlet for spending energy. Training for dog sports such as agility, obedience and rally can also be a great way to give your dog exercise.

GLP has the same nutritional requirements as all other sports breeds: twice-daily ration of high quality food is recommended. Many dog ​​food companies have breed-specific formulas for small, medium, large, and extra-large breeds. German longhired pointers are a medium-large breed and can range in age from 12 to 14 years.

The German Longhider Pointers is a strong breed with no known congenital problems. Working with a responsible breeder, people who own a German longhired pointer can get the education they need to know about specific health concerns within the breed. Good breeders use genetic testing of their breeding stock to reduce the likelihood of disease in their puppies.