Origin of Name:   The Jagdterrier is a type of working terrier, originating in Germany. 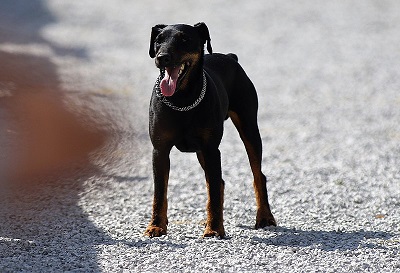 The Jagdterrier is a versatile Hunting Dog from Germany. In German, jagdterrier literally means "hunter terrier." He is particularly suited to hunting under the ground and as a stray dog ​​and is relatively small, compact and well proportioned. It has a thick coat, hard and rough or course and smooth, usually black and tan, but may also be dark brown or brown-black in color. The marks of the body are at the base of his eyebrows, snout, chest, legs and his tail. There may also be small white marks on his chest and toes.

After World War I, a small group of active hunters separated from the much larger Fox-Terrier Club. The objective of this group was to create a breed based on hunting performance. Veteran hunters and gynecologists Rudolf Frey, Walter Zengberg and Karl-Erich Gruenwald decided to select a black and tan Hunting Dog that was particularly suited to underground hunting. A coincidence arose in support of his efforts: Lutz Heck, a zoo director, presented Walter Zengberg with four black and tan terriers, who were asked to come from purebred fox-terrier lines. These dogs became the foundation store of Jagdterrier.

At this time, Drs. Herbert Lackner joined the founders. Through many years of intensive breeding efforts and skilled crossings with the Old English wirehair terrier as well as the Welsh terrier, they were successful in recovering their breed presence. At the same time, they place great emphasis on breeding a multi-talented, easily trained, hard-nosed, tongue-giver and water-happy dog ​​with a clear hunting instinct. In 1926 the German Hunting Terrier Club (Deutscher Jagterer-Club e.V.) was founded. As always, breeders continued to value the breed most carefully for its usefulness as a Hunting Dog, its stability of character, its courage and expedition.

This breed is apartment friendly, does not require a lot of grooming and they make for great watchdogs

This breed is prone to health issues and allergies

Beyond regular weekly grooming, occasional bathing will keep your Jagdterrier clean and best looked after. Grooming can be a wonderful bonding experience for you and your dog. Strong, fast-growing nails should be trimmed regularly with a nail clipper or grinder to avoid overgrowth, splitting, and breakage. The ear should be examined regularly to avoid a buildup of wax and debris, which may result in infection. The teeth should be brushed regularly.

As with all breeds, initial socialization and puppy training classes are recommended. This breed has a reputation for being difficult at home. However, in every other case, it is very easy to train them. For example, they like to do tricks and quickly learn new ones. They respond very well to training based on positive rewards rather than harsh or negative methods. This breed is required to live with its family and is likely to result in undesirable behavior if it is regularly left alone for long periods of time.

Exercise options may include playing time in the backyard, preferably being fired, or taken for a walk several times a day. Exercise can also come in the form of indoor activities, such as sneaking around, chasing a rolled ball on the floor, or learning new tricks. Some outdoor activities such as swimming, hiking, or recovering balls or flying discs can provide a good outlet for spending energy. If you live in an apartment, even a short walk in the hallway can give your dog some exercise, especially during inclement weather. Training for dog sports such as agility, obedience and rally can also be a great way to give your dog exercise.

Jagdterrier should perform well on high quality dog ​​food, whether it is commercially manufactured or prepared with the supervision and approval of your veterinarian. Any diet should be appropriate for the age of the dog (puppy, adult or senior). Some dogs are at risk of being overweight, so watch your dog's calorie consumption and weight level. Treatment training can be an important aid, but giving too much can lead to obesity. Know which human foods are safe for dogs, and which are not. If you have any concerns about your dog's weight or diet, check with your vet. Clean, fresh water must be available at all times.

Most of the Jagdterrier have healthy dogs. Those working with a responsible breeder who owns a jagirdar can receive the education they need to know about specific health concerns within the breed. Good breeders use genetic testing of their breeding stock to reduce the likelihood of disease in their puppies.