Origin of Name:   The Japanese Spitz is a small to medium breed of dog of the Spitz type. 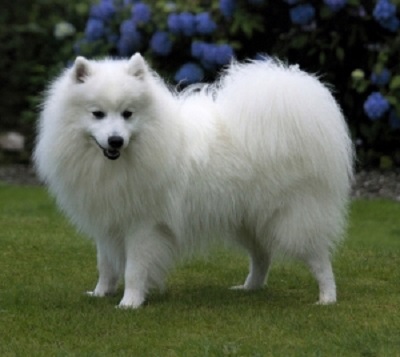 Japanese Spitz, as a fellow breeder, enjoys the company of his family and is in fact very few comedians. They like to make their family happy and thus eager to learn; There is always a smile on his face. Typical features include his pure white coat with a mane-like feature about his neck. Also, like other Spitz breeds, their tail curls on their back in a beautiful hair plum. A pointed muzzle favors them for a fox with a black nose, black eye rim, and pointed triangular ears, which stand up and move like radar towers, listening to everything going on around them and this. Very alert to the breed.

The Japanese Spitz is believed to have been descended from the white German Spitz which was brought to Japan around 1920 via Siberia and China. The entire history of the breed is unknown as records were destroyed in WWII. However, it is known that the Japanese Spitz first performed at a show in Tokyo in 1921, and in 1925, two white Spitzes were imported from Canada. Additional imports of white sprites included White Klein Wolfspitz (Keshond) from Canada, the United States, Australia, and China between the mid-1920s and the mid-1930s. The offspring of these crossbredings created a breed standard for the Japanese Spitz that was established by the Japan Kennel Club in 1948.

Japanese Spitz are intelligent, cheerful and curious with quick movements. These little dogs have balanced bodies, pointy faces and alert expressions that make them look like a fox. Like other spitz-type breeds, the Japanese Spitz has a short, soft, dense undercoat and a straight outer coat that separates from its body. Short hair covers parts of his face, ears and legs. The rest of its body, especially the neck and shoulders, is covered with long hair, which gives it the appearance of a mane. The Japanese Spitz has a long tail with profuse feathers. Its coat is pure white. The Japanese Spitz has pointed mouths; triangular, prickly ears; short, round, black nose; and large almond shaped eyes with dark edges. Her overall look is dignified and elegant.

The Japanese Spitz has a plentiful, white, double coat. The undercoat, which they shed twice per year, is thick and generous, with an outer coat that is longer. When they "blow" their coat (aka shedding), the entire undercoat is shed in an interval of about 2 to 3 weeks. Removing the fur will require daily brushing, but the hair will inevitably be on your clothes, furniture, and floor. For most of the year though, this breed is low maintenance and only requires a weekly brushing with a bath until the dog does something fishy. Bathing too often can cause them to lose their natural oils and irritate their skin, so once per season is sufficient. Fortunately, Japanese Spitz has a Teflon-like coat - that is to say, mud and dirt do not stick to their fur. If they become sloppy, you just wait for it to dry and then brush it. As with all breeds, Spitz's nails must be trimmed regularly.

The Japanese Spitz is an intelligent breed and their eagerness to train them highly. They crave companionship and interaction with the owners, so if they are left alone for long periods of time, they can develop problem behavior. Early socialization and puppy training classes are recommended. Without training they will learn things, but not necessarily what you had in mind.

The Japanese Spitz adopts many environments. They do well with lots of room to run like farms and ranches, but also fare well in small places like apartments. Either way, they need regular exercise and enjoyment with their family. A free, interactive run out or a good daily walk will benefit them physically and mentally. Later, when you read or watch TV, they will be happy to climb on the couch with you. An essential thing to remember about the Japanese Spitz is that they are Companion Dogs; They want you to spend time with them and they will make you laugh and smile in return.

Japanese Spitz needs a balanced diet. A good quality food is either purchased or homemade food is fine. Feeding twice daily is the most recommended feeding. Treatment training can be an important aid, but giving too much can lead to obesity. Know which human foods are safe for dogs, and which are not. If you have any concerns about your dog's weight or diet, check with your vet. Clean, fresh water must be available at all times.

Japanese spitzes, in general, are a healthy, active breed that can lead a happy life from 12 to 14 years of age. Some cases of patella loxation have been found within the breed and can be tested by your vet. Puppies should only be purchased from breeders responsible for working with a responsible breeder, prospective owners may receive the education necessary to learn about specific health concerns within the breed.