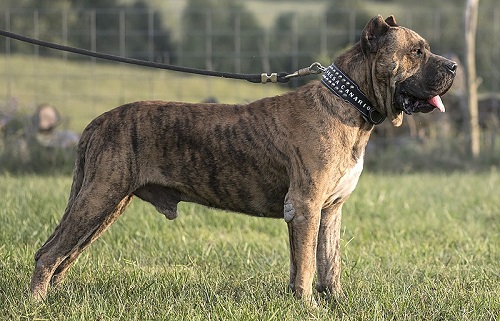 A large-sized molosid with a rectangular profile and black facade, the Pero de Presa Canario is strong and well-proportioned. With a low, deep bark, he has a balanced temperament and is very confident. Obedient and courteous with family members, he is very devoted to his boss, but can be suspicious of strangers. When alert, his stance is firm and alert.

There are several books written by historians concerning the development of the known Pero de Presa Canario (“”Canary Dog of Pre””). Documentation of the original holding dogs dates back to the fifteenth and sixteenth centuries. After the conquest of the Canary Islands, it may have existed dogs of great size or were brought there by Spanish conquistadors or possibly both. It is known that was the function for which these dogs were developed: guarding the fields, working cattle, and fleeing wild or stray dogs.

There are several theories about the genetic contribution to the making of Presa Canario. It is almost certain that the cattle dog, Iberian Presa (Perro de Ganado Mezzero) provided a beginning for the establishment of the Canary Presa. Gando was an excellent type of average size, intelligent with a rustic, intuitive instinct; A fearless guardian. Several other Hispanic breeds contributed to the Presas Formation, particularly its large varieties of Presa Español and Bulldog varieties (Alano), known for its clutching instinct. Over time, island dogs evolved into a fully differentiated breed due to the influence of Spanish breeds. The final component that completed the foundation of Presa Canario was the genetic infusion of the pre-Hispanic sheep herd Bardino Mejero, originating on the island of Ferdeventura. This dog was introduced for its intelligence, physical resistance, offering excellent guardian instincts with small bark, exceptional set of teeth and indomitable courage. In conjunction with all of these traits, another was added to the mix: fighting ability.

In the 1940s, dog fighting was ordered to be banned throughout the islands, though hooligans were known to continue fighting during the next decade. It was during this period that the Presa Canario number actually wobbled. The sovereignty of the island Presa worsened with the introduction of the German Shepherd, Doberman Per and the Great Dane. These new breeds are now focused on the island’s dog-friendly, causing the destruction of the Presa Canario breed. During this period, Presa was rebuilt in small numbers to farmers and shepherds as their primary Guard Dog.

The reconstruction of the nearly extinct Presa Canario began in the early 1970s. Distinguished breeders banned strong presses that were rustic, large-scale, vigorous and functional, possessing intense sentinel instincts, a strong temperament, calm yet reassuring and extremely territorial with unlimited courage. This dog, defending when he puts forth his idea, will face the harshest punishment without surrendering his position.

The complete recovery of the Presa Canario heritage began in 1982 when a group of breeders from the island of Tenerife formed a consortium with the goal of publicizing the resurgence of Presa Canario, which began in previous decades.