Origin of Name:   Russo-European Laika is the name of a breed of hunting dog. 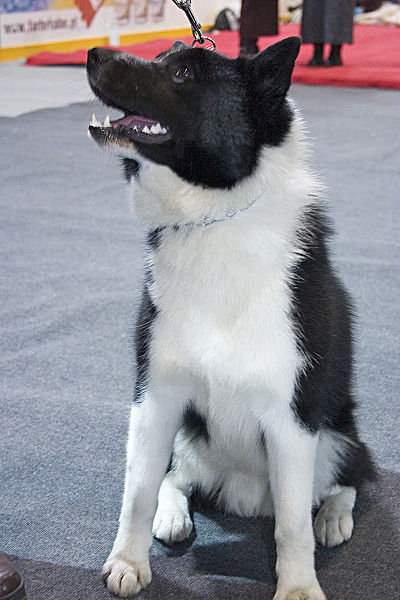 Russo-European likes, such as West Siberian Like, Karelo-Finnish Like and East Siberian Like, are part of a group of Russian dog breeds considered the Spitz type. The term spitz type, as commonly used, defines a type of dog that is thicker, longer and more often with white fur, pointed ears and a muzzle and a tail that usually curls back on dogs.

Although the exact origin of the Spitz type dogs is unknown, it is believed that all dogs of this type present today have their origins in the Arctic regions. Genetic testing of Spitz-type dogs has found that dogs in this group are most closely related to wolves, and are thus considered to be some of the oldest types of dogs. It is thus believed that it was the ancestor of these Spitz types of dogs that accompanied the wolves, and from that point human selective breeding takes us to the variety of dogs present in this category today.

In archaeological sites in central and northern Europe, fossilized remains of dogs similar to Lyca dated to around 10,000 years ago have been found. From these early times and until the early 20th century, strong, medium-sized likes with pointed mouths and prickling ears were widely spread in the Taiga forest region of northeastern Europe, from Finland and Karelia to the Ural Mountains in the west. Laikas of this time were used for hunting all kinds of big and small game and as a watchdog for their master family and property.

As agriculture began to replace hunting as the primary means of livelihood for families in the region, the land was deforested and these hunting-type Lyca dogs were gradually replaced with other dogs Were those who were compatible with this new world economy. Dogs that could guard the sheep or raise the sheep, scented predatory dogs and birds pointing to the bird became the new favorites.

In the late 19th and early 20th centuries, the lands of some of the most remote areas of the Taiga forests were inhabited and snatched in favor of agriculture by hunting hordes of settlers from the west and south. Along with them these new breeds of agriculturally friendly dogs. The uncontrolled interbreeding of these new breeds with native Lyca dogs from there destroyed the population and brought the purebred Laika to the brink of extinction. Symptoms of lycra can still be found in mixed breed dogs of these areas.

By 1930, there were only a few purebred Laika in the remote areas of Vyatka Province, Komi Republic, Perm Province and Northern Ural. However, the vast majority of these haughty Hunting Dogs were no longer being used to fulfill their hunting roots, as they were withdrawn as ordinary peasant sentinels, who spent their entire lives open near home. Or spent living in a fenced yard at the back of the house.

Realizing that the breed is now on the verge of extinction, the old Russian hunters near Moscow and Leningrad remember the old methods of hunting and can remember the breed. Extraordinary hunting qualities began to buy what remained of the few remaining purebreds. Dogs can still be found. These dogs were then brought back with native lyca strains from different geographic regions to preserve the breed and rekindle their hunting instincts. In Russia, Lycus was generally named in the context where they were originally found, such as the case of Karelian Likes, Komi Likes, Zyrian Likes, Votyc Likes and Arkhangelsk Lyca strains referred to today. It was these Likes that became the foundation breeding stock for the development of the modern Russo-European Likes. The advantage of this breeding program is that it brought genetic diversity and health back into the breed at the expense of small changes in appearance. Although all of these likes looked substantially the same, there were some differences because the lifespan of some geographic regions varied in the length of the muzzle, the size of the ears, whether the body was colored or short, and the thickness and color of the coat.

Prior to the eruption of World War II, some small to medium-sized likes were raised by hunters in areas of Moscow and Leningrad as a result of this breeding program. Originally there were very few black-and-white Russian-European Likes because the dominant colors for dogs of this time were red, reddish brown or brown lambs in which black and white were rare. According to records referencing the Moscow Dog of the 1940s, only three of the Russian-European likes shown had a modern-day black-and-white coat, while most had other more common coat colors.

The modern-day Russo-European Like still retains many of the physical traits of native dogs from Karelia, Komi, Arkhangelsk Province, Udmurtia and other parts of European Russia from which it has been derived.

The Russian-European Lyca is defined as a compact, lean-muscular medium-sized Spitz type dog. Males should measure between 21–23 when they are dead, while females should be between 19–22 , weighing typically between 45 and 55 pounds, with males being heavier than females. The muscles of the body should be well developed with a wide chest. The head and tail should be raised almost proudly which is a very distinctive feature of this breed. The hind legs should be kept wide with fast mobile legs ready for action. A slight slope to the body requires that females have an fall between the base of the tail or the sacrum and one-half- drop from the shoulder. For men. Any deviation from this standard will be considered a defect.

The coat of Russo-European lycra is typically black with distinct patches of white that can range from completely black to completely white. Any other color such as wolf gray, red, or fawn should be considered a defect. The coat forms a ruff around the head with straight course guard hair and a thick, thick woolen undercoat. Rough on males will be significantly more developed and pronounced than females. The hairs on the tail should be bristled with longer hairs than the body, especially the winged ones at the bottom.

This breed is excellent, they are healthy and easy to train

This breed is prone to allergies, is not apartment and kid friendly

Since Russo-European Likes have a thick double coat of fur, with a thick, dense, soft undercoat and a thick long topcoat, some grooming and ritual brushing is needed if you plan to keep them indoors. Will be. The undercoat will shed or "blow up" annually and for women it can happen twice a year. Dogs living in warm climates have a tendency to shed throughout the year. To take care of this breed you have to keep a lot of dog hair on furniture and carpet, and during these shedding sessions keep floating in the air which can last for three weeks or more. You can reduce loose hair during these times with regular brushing and grooming sessions.

Russian-European Lyca are some of the healthiest dogs in the world. There are currently no serious hereditary health issues known to be associated with them. However, there may be minor abnormalities typical of all purebred dogs among the Russo-Siberian Lycas. Rare incidence of umbilical hernia and monorchidism (the condition of having only one testicle within the scrotum) has been observed among puppies.