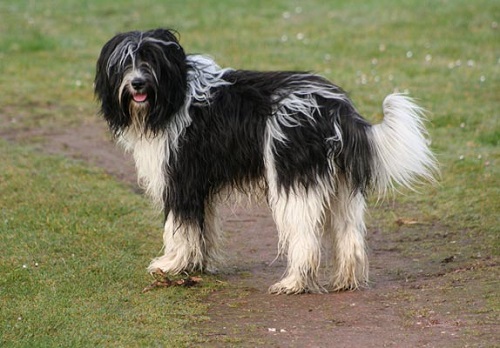 The Schapendoes were everywhere in the Netherlands during the late 19th and early 20th centuries, but their numbers dwindled drastically when Border Collies were imported. When the breed club for Nederlandse Schapendoes was founded in 1947, the Schapendoes breed was resuscitated.

The Schapendoes is a lightly-built, long-coated, medium-sized dog. His movements are effortless and springy and his astounding ability to jump makes him excel at agility and other dog sports. With an attentive and courageous character, he is intelligent, watchful, lively, friendly and high-spirited. Towards people familiar to him, he develops great affection and loyalty.’

In the late 19th century and early 20th, the Netherlands scapendo (Dutch Shapendo) occurred throughout the Netherlands where they were predominantly sheep-grazing dogs. The shepherds valued him for his work and tireless enjoyment in his intellect. The breed belongs to a wide group of long-haired herbivores, with densely-coated heads, and bearded coli, pulleys, Polish lowland sheepdogs, bobtail, bryard, bergamasco, and old German sheepdogs. In Hessen, Odenwald, and Netherrhin districts. All these identical dogs are small mutations of mountain dogs.

Canine Authority, P.M.C. Toepoel is the founder of Schapendoes. During World War II, the breed had almost disappeared, but he knew how to bring back people’s interest in the sheep-rearing dog and any specimens of Shapendo from wherever they could be found. Were used for breeding.

The Breed Club for the Netherlands Scapendo was established in 1947 and in 1952, the breed was temporarily recognized by Rad van Beheer. In 1954, the standard was established and a stud book was introduced. Definitive validation was followed in 1971. Since then, only registered dogs have been reared.

The Scapando is similar to many other long-coated European herding breeds, and in many ways can be said to resemble a much smaller, darker-skinned Old English Sheepdog. Schapendoes are a small to medium sized breed. Most males stand between 17 and 20 inches at the shoulder, and most females stand between 16 and 18 inches. Although weight is greatly affected by gender, height, build and condition, most members of the breed weigh between 25 and 55 pounds. Schapendoes are a well-proportioned breed, but most members of the breed are tall from floor to shoulder, from chest to rump. Much of the Scapando’s body is obscured by its long, dense coat, but underneath is a very muscular and athletically fit dog. Schapendoes are quite fine-boned and elastic. The Scapendo has a fairly long tail and its unique carriage is characteristic of the breed. The tail should be carried down when the dog is resting, somewhat up and down when the dog is running, back and straight when the dog is running, and high when the dog is jumping but back when the dog is jumping But not out loud.

Like the body of the breed, most of the Scapando’s facial features are obscured by its coat. Schapendoes have a fairly flat skull. The skull of the breed is quite short for a shepherd dog, and in fact it is wider than it is long. The snout of the scapando is also quite short, usually much shorter than its skull. The muzzle is both deep and wide, and remains so with very little tapering towards the end. The nose of Schapendoes is located slightly below the skull line and is colored according to the color of the dog’s coat. Scapendo’s ears are medium in size, fairly mobile, and hang freely, though not close to the head. The eyes of the Scapando are large, round, facing forward and brown in color. The overall expression of most breed members is honest, open and lively.

The Scapando has a double coat, which means it consists of a longer, thicker outer coat and a shorter, softer and denser, undercoat. The outer coat is quite long, although its length varies in different parts of the body. Hair should never be tightly curled or frizzy, but usually very wavy and/or slightly frizzy. The tufts of hair often stand out from any part of the body, and there is a clear braid, mustache and beard. There are also significant feathers on the back of the legs and tail.

Scapendo breeders initially cared little about the color of their dog, so any color or pattern on the breed is perfectly acceptable. Some preference is given to dogs with blue-gray to black markings, although the extent of this preference varies greatly from country to country. Most members of the breed are white with bluish-gray, black or brown markings, although other colors are often seen such as solid black or solid brown.

This breed is kid friendly, dog friendly and cat friendly

This breed is prone to allergies, health issues and and is stubborn

In addition to regular weekly grooming, occasional bathing will keep Scapando clean and perform his best. Grooming can be a wonderful bonding experience for you and your dog. Fast growing strong nails should be trimmed regularly with a nail clipper or grinder to avoid overgrowth, splits, and cracks. Their ears should be examined regularly to avoid the formation of wax and debris, which may result in infection. The teeth should be brushed regularly.

Scapendo loves to learn and they do so voluntarily, but sometimes he may have an independent streak.

Schapendoes require too much exercise. A one-hour run daily keeps him fit and avoids nervousness. Other exercise options include playing time in the backyard, preferably fencing, or taking walks several times a day. Exercise can also come in the form of indoor activities, such as hide-and-seek, chasing a ball rolling on the floor, or learning new tricks. Some outdoor activities such as swimming, hiking, and retrieving balls or flying discs can provide a good outlet for spending energy. If you live in an apartment, even a short walk in the hallway can give your dog some exercise, especially during inclement weather. Training for dog sports such as agility, obedience and rally can also be a great way to give your dog exercise.

Schapendoes should perform well on high quality dog ​​food, whether it is commercially manufactured or prepared at home with the supervision and approval of your veterinarian. Any diet should be appropriate for the age of the dog (puppy, adult, or senior). Some dogs are at risk of being overweight, so watch your dog’s calorie consumption and weight levels. Treatment training can be an important aid, but giving too much can lead to obesity. Know which human foods are safe for dogs and which are not. Contact your vet if you have any concerns about your dog’s weight or diet. Clean, fresh water must be available at all times.

Some dogs may face these issues in their lives, but most scapendos are healthy dogs. Working with a responsible breeder who aspires to own a chapependo can get the education they need to learn about specific health concerns within the breed. Good breeders use genetic testing of their breeding stock to reduce the likelihood of disease in their puppies.