Origin of Name:   The Schillerstövare, translated as the Schiller Hound in English, is a breed of dog of the scenthound type. 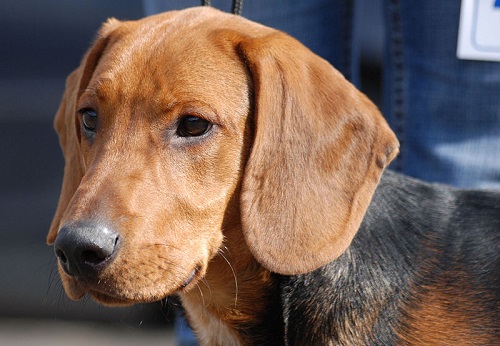 Schillerstover, also known as Schiller Hound, is a Swedish Hunting Dog that was developed in the late 1800s in Stenungstand on the southwest coast of Sweden. The promoters of this breed were Per Schiller, a farmer described by the Swedish Kennel Club (SKC) as a "Godsagar" or big landowner; He was an enthusiastic outsider and hunter as well as an artist. His aim was not to create a new breed of dogs, but to adapt one to his liking - elegant with a lively temperament, possessing an excellent nose and strong legs. This dog will be versatile, but will also be suitable for tracking and hunting foxes and rabbits in the snow.

During the late 1800s, SKC founders Dr. Adolph Patrick Hamilton and Per Schiller were both trying and cooperatively trying to develop a better stowage type dog. Dr. Hamilton used the English Foxhound which became Hamilton-Stover. Both these breeds are similar in appearance. The Hamilton-Stover is slightly longer, but the main difference is in color; Schillerstover is brown and black while the Hamilton-Stover tricolor.

The word ""stoware"" is Swedish for ""Gun Dog"", but the Scandinavian stoware breeds actually belong to the odor hunter group. Schillerstovares is a mixture of Hounds of Harriers from Sweden, Austria, Germany, Switzerland and England. The exact source of the original Schillerstovares' bloodlines is not certain, although most fans of the breed believe they are 7/16 Swedish-German, 7/16 English Harrier and 2/16 Swiss. However, as the dog breeder, judge and author Rhea Horter points out, the Austrian aspect is not accounted for in this breakdown..

Many of Schillerstoware's ancestors have hunted the icy forests of Sweden since the Middle Ages, when soldiers returning from war in the 15th and 16th centuries brought dogs back from Austria. These dogs had become the ancestors of most of Sweden's Hunting Dogs by the 1800s. Per Schiller incorporated many of these wounds to create his new breed. In addition to these, he used imported hounds from southern Germany, which were small and predominantly brown and black with white markings. Schiller also used the Swiss hound which was imported into Sweden by Mr. H. Karbonnier, which was quite different from the German ones. The dog breed historian and author Dr. Hans Raber writes that he believes Schiller used Swiss black and red hounds, such as the ""old 'Argour Hound'""..

He also surpassed the English Harriers, which shaped Schillerstover. Mr. O.B. Rydholm imported an English harrier named Crossy about the time Schiller was building his new type of dog. Crossey was paired with a female harrier that was imported by an English civil engineer living in Sweden. It was his child that Schiller crossed with the Swedish Hound..

He showcased his new breed at the first Swedish dog show held at 18. About 179 hounds were shown, including two shillers — one sister and brother — named Tamburini and Ralla I, respectively. These first dogs were smaller than today's Schillerstowar, brown instead of black markings. He is considered an ancestor of the present-day Schillerstoweras..

Schiller painted a portrait of two of the grandchildren of Tamburini and Ralla I, which he also recorded at the 1892 Göteborg Dog Show. He was named Polka 1 and 1 Roller (although one source gives the latter dog the name Black 1). Unfortunately Purse Schiller did not live to gain full recognition of the breed he created; He died in 1894 at the age of thirty-four. His brother Carl inherited the dogs and continued to purse, breeding and displaying them..

Schiller succeeded in achieving remarkable working traits as well as stability of type in these dogs in a remarkably short period of time. When fifty entries from the Schiller line appeared at the 1903 dog show hosted by the Stover Club of Westergotland, their presence mesmerized the crowd and discussed a breed standard. In 1907, the breed was officially named Schillerstover in honor of Purse Schiller..

It is worth noting that Schiller was able to create his own breed in record time, despite the fact that he used such a variety of dogs of different heights. A dog breed expert speculated that what he did so quickly could either be chalked up to luck, or suggest that these different breeds would feel genetically present More than..

An outstanding Schillerstover named Ray was admitted to the 1910 Dog Show in Stockholm. J. Ray, owned by Svedenborg and reared by Karl Schiller, had exceptional working qualities, making him a favorite of hunters. Ray was also a favorite stud dog and many of today's Schillerstover lines meet him..

Large hounds are used to drive foxes and rabbits through this medium and are highly valued for its tracking and hunting abilities. The Swedish Kennel Club (SKC) claims that Schillerstover is the fastest of the Scandinavian hounds and the breed has been called a ""Hunting Dog for frozen lands"". The sobriquet is well-deserved as Schillerstover demonstrates great strength and endurance, as well as incredible speed, traversing vast expanses of icy terrain, unaware of the long hours of hunting in the bitter cold of Scandinavia. This breed works alone with its owner rather than the pack..

These dogs have a thick undercoat; The top coat is short and shiny, but stiff to the touch, situated close to the body. The hairs on the front of the head, ears and feet are smooth rather than stiff, and are shorter than the rest of the body. The top coat is the longest on the back of the thighs and on the underside of the tail. The color of their coat is tan, fawn, or ginger with a distinct black mantle (also called a saddle) covering the back and sides of the neck, over and above the torso, and the top of the tail. Black marks are allowed on the cheeks; Light white marks on the chest and toes are also acceptable.

In Schillerstowares the skull and long ends are slightly domed. The head is triangular in shape when viewed from the front and side. Their faces are the widest between their ears and their stops are well defined. Their snout are long and, when viewed from the side, are straight and parallel to the top of the skull. The ears are soft and are high, hanging flat, with the front edge close to their cheeks. When the ears are pulled forward, they reach the middle of the length of the snout. Schillerstowares carefully lifts his ears slightly. He should have a vibrant expression in his medium-sized, dark brown eyes. He has a black nose with thin cheeks and well developed nostrils. Their lips are stiff and their jaws are cut with scissors over a full set of strong, white teeth.

Their strong necks are long with smooth, tight skin. The male should have noticeable arches on the crest. His long, muscular shoulders are well laid back and defined. Their chest is deep, well developed, and reaches their elbows. The ribs are sprained moderately. His back is straight and there is a slight tuck up on the underline. The strong waist has a medium arch and has a long, wide croup slope.

Their front legs are straight and parallel when viewed from the front. The upper arms are longer, forming a right angle to the shoulder. The elbows are close to the body and cannot be seen below the chest. Pastors are flexible and slightly angled from the forearms. They have strong hindquarters and well-muscled thighs that look wide when viewed from the side. The hind legs are parallel when viewed from the back. Stifles and hawks are well angular and declavs are absent. The posterior pestern is lean, short and vertical. The legs at Schillerstover are oval and tight, with well-arched toes. Their gait is strong and long, with legs running parallel to each other.

Their tail, set in line with the back, widens at the base and tapers towards the tip, which comes all the way down. Schillerstover keeps his tail straight or curled like a saber. In motion, the tail should not be raised above the level of the back.

This breed is intelligent, easy to train and commonly healthy

This breed is prone to allergies and has seperation anxiety

"Schillerstover requires minimal grooming. Regular brushing should be done at least once a week to remove loose hair. Also, after a hunting expedition or any prolonged outdoor time, you will need to brush your dog and carefully examine its ears and feet or any debris that may have been inadvertently picked up. Ears should be cleaned and checked periodically.

These dogs have a hard outer coat that protects them from the elements, and also repels dirt and water, making repeated bathing unnecessary and unhealthy. Too much bathing with harsh shampoos can remove their skin and essential oils, which can damage the protective properties in their skin and coat. Take a bath with mild soap when needed. A good rub with a chamo in between the bath will be enough to clean your dog and bring out the natural shine of his hair."

Schillerstowere is a hardy, healthy breed with no major genetic problems. The lifespan of this breed is approximately thirteen years.