Origin of Name:   The Spanish Mastiff or Mastín Español is a breed of dog from Spain. 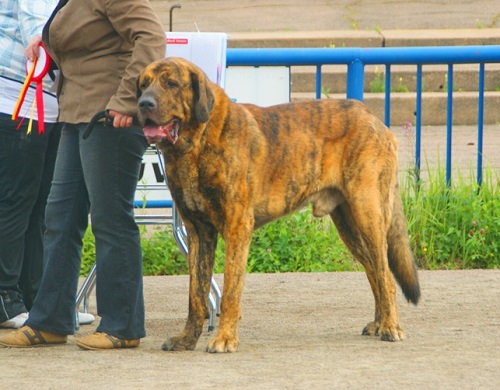 The Spanish Mastiff is a large-sized, well-balanced, very powerful and muscular dog. He has a huge head and a body covered with a medium-length coat. His bark is hoarse, low and deep, very melodious and quite far-fetched. The Spanish Mastiff comes in a range of coat colors including black, fawn, red, gray, and yellow, and can be seen with brindle or white markings.

Used for guarding and protecting, the breed is closely related to the seasonal movement of livestock, particularly Merino livestock, which he carried along at the time of the ""mesta"". In the Middle Ages, it was a confederation of sheep herders who traveled to distant locations seasonally to find pastures. The Spanish Mastiff was in charge of defending them against wolves and other predators during their journey. Whether performing motionless or wandering, he performs in the same way for fields, people and property in general.

The Spanish Mastiff is a very old breed. It appeared on the Iberian peninsula 2,000 years ago, before the Roman invasion brought by the Greeks and the Phoenicians. The first mention of a mastiff from the area appears in Virgil's writings around 30 AD Virgil, his poem The Georgics mentions that the Iberian Mastiff's nurturing character would make it the best protector and protector of the herd. Another mention of the breed dates from the first century. The Roman agronomist and lead author, Columella, wrote a 12-volume book, Race Rustica, in which he wrote about the Mastiff: ""... fight in the darkness of dawn.""

The Mastiff's role flourished in the 10th century when the best organized and guided farming of animals in Europe became the lineage of sheep in Spain and the state's economy was based on the production and expansion of wool. Development peaked in the 12th century when a new style of breeding of sheep, the merino, began. These animals usually spent the winter in the south of Spain and moved to mountain slopes in the north in the beginning of summer. There were about 60,000 shepherds with a wandering flock of sheep and for every 100 sheep, there was at least one mastiff to protect the herds as well as to protect the herds.

Such heavy migration left an imprint on Spanish culture. The Spanish Mastiff can be seen in literary works as well as praised in paintings by the famous Velazquez. By that time, these dogs were characterized by well-known traits of their independence, weather resistance, and defensiveness.

The Spanish Mastiff has a massive head and a body covered with a medium-length coat. Its bark is hoarse, low and deep, very melodious and can be heard from far away. The Spanish Mastiff comes in a range of coat colors including black, fawn, red, gray and yellow, and can be seen with brindle or white markings.

This breed does not require a lot of grooming, they are good watchdogs and are kid friendly

Beyond regular weekly grooming, occasional bathing will keep your Spanish Mastiff clean and show its best. Grooming can be a wonderful bonding experience for you and your dog. Strong, fast-growing nails should be trimmed regularly with a nail clipper or grinder to avoid overgrowth, splits, and cracks. Their ears should be examined regularly to avoid the formation of wax and debris, which may result in infection. The teeth should be brushed regularly.

Although a relatively sober breed, the Spanish Mastiff must do some daily exercise to boost his physical and mental health. Exercise options may include playing time in the backyard, preferably fencing, or taken for walks several times a day. Exercise can also come in the form of indoor activities such as chasing a ball rolling on the floor or learning new tricks. Some outdoor activities such as swimming, hiking, or retrieving balls can provide a good outlet for spending energy. Training for dog sports such as agility, obedience and rally can also be a great way to give your dog exercise.

Spanish Mastiffs should perform well on high quality dog ​​food, whether it is professionally manufactured or prepared at home with the supervision and approval of your vet. Any diet should be appropriate for the age of the dog (puppy, adult, or senior). Some dogs are at risk of being overweight, so watch your dog's calorie consumption and weight levels. Treatment training can be an important aid, but giving too much can lead to obesity. Know which human foods are safe for dogs and which are not. Contact your vet if you have any concerns about your dog's weight or diet. Clean, fresh water must be available at all times.

Some dogs may face health challenges in their lives, but most Spanish mastiffs are healthy dogs. Working with a responsible breeder, prospective owners can obtain the education necessary to learn about specific health concerns within the breed.