Origin of Name:   The Stabyhoun or Stabij is one of the top five rarest dog breeds in the world. 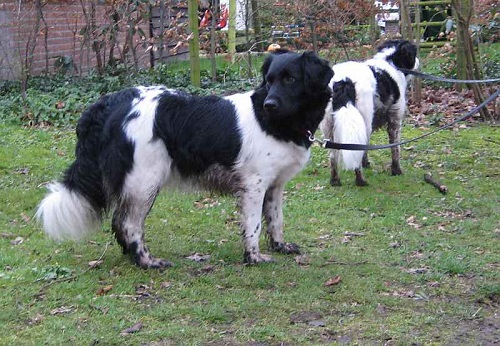 Stabyhoun's independent nature was a deliberate breed characteristic by farmers who wanted a dog that could hunt for moles and rabbits independently. The trend that we still see today, so, if he independently hunts and digs in the garden, for example, you cannot be bothered. With proper guidance, a stabby is a gentle dog and a great friend for life.

Stabies are also very curious. Always pay attention to what Stabyhoun is doing because by their inquisitive nature, they can quickly get into trouble. If you feel that your stabby will sit quietly if something happens, you will often be disappointed. Although the stabbies make a lot of noise when something goes wrong or to alert their boss, they usually expect the owner to accept that things are normal before accepting them. Most Stabys will need to verify that there are no ""surprises"" at the store before it cools down again.

This breed is a functional and powerfully built pointing dog that originated in the Netherlands. Most Stabyhouns are black and white. The brown and white color is seen in the Netherlands, but the orange and white Stabhaun is almost extinct. The construction of the stabie is such that it is longer in length than height and, likewise, shows a length greater than the head width. By applying feathers to his chest, collar, foreleg, trouser and tail, Staby has the appearance of being long-haired, but the coat is not too long. Stabyhoun is considered an ""all-around"" dog, with the ability to hunt, retrieve, and gesture. They are also ideal family dogs due to their size and affectionate character.

A native of the Netherlands, Stabiehön Drensch is related to Patrijsond and Heidewachtel. Perhaps his name is due to his versatility; The word stabyhoun is derived from the words sta mij bij or ""stand by me"", while houn is the Frisian word for dog and is called ""hoon"".

The Stabyhoun we know today exhibits definite similarities to the dogs that were depicted in 17th-century paintings. For example, by the famous Dutch artist Jan Stein. Stabyhoun originated in the Western Forest region of the Netherlands with another breed, the Wetterhoun. In the early 20th century, Staubhoun and Wetterhoun were regularly crossbred with each other, threatening to lose unique varieties of each. In 1938, a group of enthusiasts from Kynologenclub Friesland began to purify the two breeds again, and in 1942, both breeds were officially recognized. Important names in this process were: J.V. Bose, T. van Dijk, B.C. D. Graff and W. Hoxema. The first standard was dated February 10, 1944. In 1947, the Dutch Association for Stauby and Wetterhönen (NVSW) was founded with the mission of representing the interests of Frisian breeds.

The first Stabihon litter born in the United States was recorded in 1994. As of 2017, Staubhoun has a population of over 7,000 dogs worldwide. Their popularity has risen in Europe and North America, including Belgium, Finland, Sweden, Denmark, Norway, the US and the UK, in addition to their native Netherlands.

Stabyhouns are medium-sized, sturdy dogs with a simple appearance (as in the no-frills, artless form). This breed usually weighs between 38 and 58 pounds. Height (measured from the ground to the withers) for males should be 20 to 21 inches; Females should be 19 to 20 inches tall.

Their coat color can be black, brown or orange with white markings. Either white or other colors may prevail. White may contain ticks (small spots of color on a white background) or roan (other colors of hair mixed with white hairs). Stabyhouns have long, smooth hairs all over their bodies. Light wave is acceptable over the group. The coat hairs on the head are short. On the upper and lower thighs and the back of the forelegs, the coat is bushier. A white tip on the tail is desirable.

Their heads are much longer than they are wide; The muzzle and skull are equal in length. Their skull is slightly round and of medium width. They hardly have any stop. The muzzle is bent towards the nose, but is not pointed at the end. The bridge of the nose is wide and straight when viewed from the front or side. The head has tight-fitting skin, which does not have wrinkles.

Stabyhouns have round, medium-sized eyes with tight lids that are set horizontally. Their eyes are not deep nor do they stick out. The eye color is dark brown for dogs that are predominantly black, and brown for brown or orange colored dogs. They have low set ears with no folds at the base, so that flapping ears are close to their heads. Their medium long ears are trowel shaped. They usually have feathers on their ears, with the longest ear gradually decreasing at the base; They have short hairs in the lower third of their ears. They have minimally developed cheeks, tight lips and strong teeth that lock in a scissor bite. Their nose is well developed with wide open nostrils. The nose is black on black dogs and brown on brown or orange colored dogs. (Though some white on their nose is acceptable.)

Stabyhouns lay their heads down on their short, rounded necks, creating a blunt angle between the neck and top line. There is no dew or throat in their slightly arched neck. The shoulders are well laid back and angular at the joint. They have a broad chest that is not deep, making the forelegs wider. The chest does not hang below his elbow. They have well rounded ribs and well developed ribs. Their long backs are straight, with powerful waists and a slight slope to the croup. They have a moderate bulge in their abdomen.

The obverse is straight, as are the pasterns. The front feet are arched with well developed toes and hard pads. They have powerful hindquarters which are nicely angular. The lower thigh is of medium length with a low set hock and a short posterior pastern. Their hind legs are rounded, with well-developed pads. The Stabyhoun's long tail is not high, reaching down. In the repo, the dog hangs the tail down, perhaps with the last third curled up. In action, the tail is lifted without curling.

This breed is easy to train, requires minimum grooming and are low droolers

This breed is not very bright, they are prone to allergies and are stubborn

The grooming needs of a Stabyhoun are almost non-existent. Any necessary hair trimming can be done on its own until it is neutered. A neutered dog is also called a ""cast coat"" where the undercoat is exploding and may require a little more grooming.

Otherwise, the medium-length coat of Stabyhoun is self-cleaning, which means that the dirt automatically falls off when the coat is dry. A brush through it to remove the last remnants of the sand and it clears again. It also means that he rarely takes a shower. Even if it is indeed very dirty, it is usually sufficient to simply rinse or swim in a clean pool. Shampoo is needed only when it is getting something smelly; Then, use a special, neutral dog shampoo so that its skin oil is not removed.

Stabys are self-motivated and quick learners. The reason for this lies mainly in the fact that Staby had to work independently to destroy the pests, so it was easy to be a real ""thinker"". It suited the breed well at a time when there were few outside influences and hardly any traffic.

With positive and gentle training, Stabby is quick to learn and wants to please. Too much pressure is never a good idea, while a good coach is important. Stabby loves a job, but her family must provide a fair and consistent approach to her training, which is very important for a peaceful, happy and diverse education. A hard approach with Staby sucks. He will stop working altogether and will no longer perform his duties voluntarily.

Daily exercise is essential for your stabby's mental and physical health. They do not require more than a good daily hour of exercise. Later, they are content to sleep during the day and rest quietly. Perhaps even more important is that Staby needs a mental challenge. Stabies need to perform a task in daily life, and something that provides variety should be given preference. Agility, poaching, odor training, and greed prey can all be productive and stimulating for your stabby. A busy dog ​​is the perfect dog.

Stabyhoun should perform well on high quality dog ​​food, whether it is commercially manufactured or prepared at home with the supervision and approval of your vet. Any diet should be appropriate for the age of the dog (puppy, adult, or senior). Some dogs are at risk of being overweight, so watch your dog's calorie consumption and weight levels. Treatment training can be an important aid, but giving too much can lead to obesity. Know which human foods are safe for dogs and which are not. Contact your vet if you have any concerns about your dog's weight or diet. Clean, fresh water must be available at all times.

Stabyhoun, despite its small population, is fortunately a relatively healthy breed. The ASA and NVSW make every effort to maintain it in a similar manner. Responsible breeders examine their stock for health conditions such as epilepsy, hip and elbow dysplasia, patent ductus arteriosus, and cerebral dysfunction. The purpose of ASA's breeding program is to reduce these incidents as much as possible, although this is not easy, as the causes are not always clear or completely hereditary.