Origin of Name:   The Thai Ridgeback is a muscular, medium-sized pariah-type dog with a wedge-shaped head. 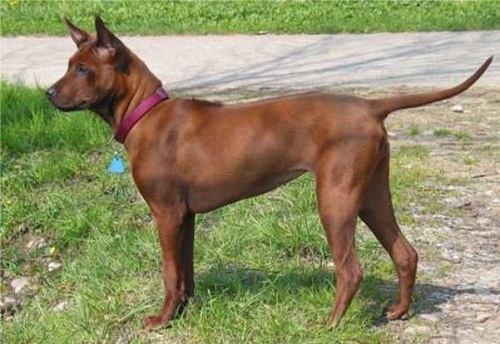 The Thai Ridgeback is a muscular, medium-sized dog with a streamlined body that makes him very agile and a natural athlete. The ridge on his back is made up of hair growing in the opposite direction from the rest of his coat and the breed has 8 different ridge patterns. Puppies can breed without this ridge. Coat colors sometimes include solid blue, black, red, or fawn with a black mask on red-coated dogs. The Thai ridgeback also has a speckled tongue and some have a solid black / blue tongue. Today, most ridgebacks are Companion Dogs, but they still maintain several similar instincts for the jobs for which they were born: hunting and guarding. They had to be independent, self-sufficient and hunt for their food, giving them a strong tendency to survive, a high hunting drive, and a high level of intelligence.

If well bred and properly socialized, the Thai Ridgeback can be a loyal, loving pet. As a defender breed, they naturally protect their home and can be reserved and suspicious with strangers. The Thai Ridgeback will need a patient, consistent and experienced owner with a good understanding of dog behavior; They are not for first time dog owners.

The Thai ridgeback is an old breed that can be seen in Thailand's archeological documents written about 360 years ago. It was mainly used for hunting in the eastern part of that country. People also used it to escort their trains and as a watch dog. It has maintained its original form for so many years due to poor transport system in the eastern part of Thailand; It was less likely to hybridize with other breeds. Today, the breed is still very rare outside Thailand.

The Thai Ridgeback is a muscular, medium-sized pariah-type dog with a wedge-shaped head, triangular-shaped prick ears, and a very short, smooth coat. It has a clear ridge on its back which is formed by the growth of hair in the opposite direction which extends from the back to the hips.

This breed is not famous for its trainability, they are prone to health issues and allergies

Thai Ridgeback's coat is short, hard and straight, so brushing is required occasionally to remove loose hair. There may be a need to brush more often when it is shedding, which happens only once or twice a year. Due to the absence of undercoats, people with dog-dander allergies may find that ridgeback makes them less irritating than other breeds.

Apart from grooming regularly, taking occasional baths will keep your Thai ridgeback clean and it will look its best. Grooming can be a wonderful bonding experience for you and your dog. Strong, fast-growing nails should be trimmed regularly with a nail clipper or grinder to avoid overgrowth, splits, and cracks. The ears should be examined regularly to avoid the formation of wax and debris, which may result in infection. The teeth should be brushed regularly.

Naturally protective and reserved with strangers, Thai ridgebacks will do best with proper socialization and training. Dog behavior requires an experienced owner / handler as this breed can be very independent.

Exercise options include playing time in the backyard, preferably fencing, or taking walks several times a day. Exercise can also come in the form of indoor activities, such as hide-and-seek, chasing a ball rolling on the floor, or teaching them new tricks. Some outdoor activities such as swimming, hiking, retrieving balls or flying discs can provide a good outlet for spending energy. If you live in an apartment, even a short walk in the hallway can give your dog some exercise, especially during inclement weather. Training for dog sports such as agility, obedience and rally can also be a great way to give your dog exercise.

Thai Ridgebacks should perform well on high quality dog ​​food, whether it is professionally manufactured or prepared at home with the supervision and approval of your vet. Any diet should be appropriate for the age of the dog (puppy, adult, or senior). Some dogs are at risk of being overweight, so watch your dog's calorie consumption and weight levels. Treatment training can be an important aid, but giving too much can lead to obesity. Know which human foods are safe for dogs and which are not. Contact your vet if you have any concerns about your dog's weight or diet. Clean, fresh water must be available at all times.

Hip dysplasia, though rare, can occur in the Thai Ridgeback. More common is the Dermoid Sinus Cyst. Some dogs may be faced with these health challenges in their lives, but the majority of Thai Ridgebacks are healthy dogs. Working with a responsible breeder, prospective owners can gain the education they need to learn about specific health concerns within the breed.