Origin of Name:   The Transylvanian Hound is an ancient Hungarian hunter created by special climate. 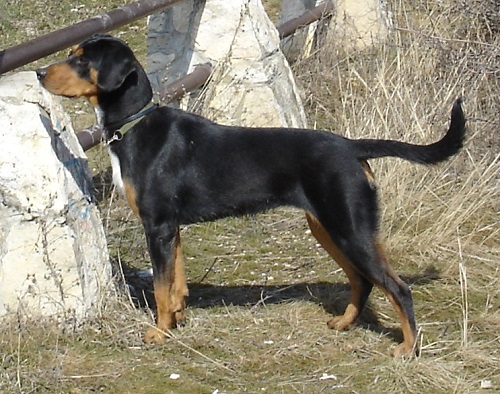 The Transylvanian Hound is an ancient Hungarian hunter created by special climate, terrain, and hunting conditions. Their entire form reflects nobility and harmony. Due to their medium size, their body is athletic, lean, muscular and exaggerated, and their movement is balanced and elegant. Its basic nature is calm, balanced but firm, temperamental and adaptable. His playful nature makes him an ideal family favorite. Due to their balance and friendliness, they can be placed in both apartments or homes. His courage and loyalty make him a good defender.

This scent hound is a basic dog, but can also be used for retrieval. When hunting in a group or alone, you will hear a far-reaching, high, ringing tone indicating the direction of the game. Working away from the farm, he developed problem-solving abilities and became highly intelligent over the centuries.

Erdeli kopo (Transylvanian hound) is an ancient Hungarian breed determined by the particularity of the climate, region and hunting conditions of the region in which it was bred. The breed reached its climax in the Middle Ages, at a time when it was the elite's favorite Hunting Dog. In relation to its original use, due to the development of agriculture and forestry, it was pushed back into the pathless forest of the Carpathian Mountains.

As a result of the effects of different terrain conditions, two varieties of the Erdeli copo developed: the long-legged and short-legged variety. These two varieties were always kept together. Originally, the long-legged Transylvanian hound was used for hunting large game such as buffalo, and later, bears, wild boar, and lynx, while short-legged hounds were used in highlands for small game such as foxes or rabbits And used to hunt Chamo in rocky.

In the early 20th century, the Transylvanian hound was nearly extinct. Prescribed breeding was resumed in 1968 and, nowadays, a significant number of long-legged dogs exist in Hungary and neighboring Romania; The short-legged variety has disappeared.

This is a very intelligent breed, they are healthy and easy to train

This breed is prone to allergies, they are stubborn and have seperation anxiety

The short hair of the Transylvanian hound does not require any special care. Brushing with a strong bristled blade once a week should suffice. Long and loose hair can be rubbed off with rubber coat gloves. Strong, fast-growing nails should be cut regularly and kept shorter than a nail clipper or grinder to avoid overgrowth, splitting, and breakage. The ears should be examined occasionally to avoid the formation of wax and debris, which may result in infection. The teeth should be brushed if needed.

The Transylvanian hound is primarily a Hunting Dog that can hardly resist its ancient instincts, so it is very important to train it properly. Patience and perseverance are required. The Transylvanian hound is smart enough to understand what his handlers want from him; He simply cannot agree to it. Education should be consistent and clear, but not for long. Hard training methods are not recommended.

The Transylvanian hound is a very active breed. Plan a daily walk or run for at least one hour. Remember that the urge to chase the game can be more powerful than attachment to its owner. For this reason, walking without a strap is not appropriate and off-leash romp should be in areas that are securely enclosed. Training for dog sports such as agility, obedience and rally can also be a great way to give your dog exercise.

The Transylvanian hound should perform well on high quality dog ​​food, whether it is commercially manufactured or prepared at home with the supervision and approval of your vet. Any diet should be appropriate for the age of the dog (puppy, adult, or senior). Some dogs are at risk of being overweight, so watch your dog's calorie consumption and weight levels. Treatment training can be an important aid, but giving too much can lead to obesity. Know which human foods are safe for dogs and which are not. Contact your vet if you have any concerns about your dog's weight or diet. Clean, fresh water must be available at all times.

Some dogs may face health challenges in their lives, but most Transylvanian hounds are healthy dogs. Working with a responsible breeder, prospective owners can obtain the education necessary to learn about specific health concerns within the breed.