Origin of Name:   The Treeing Walker Coonhound is a breed of hound descended from the English and American Foxhounds. 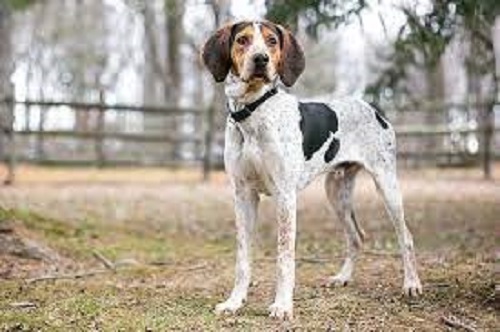 Few things can quicken a raccoon hunter’s pulse like the sight of this swift, tricolored hound in full stride—the long, muscular legs, the powerful and propulsive hindquarters, and the streamlined frame all working to cover maximum ground with minimum effort. Later, basking in the warmth of a campfire after an honest night’s work, this sweet-faced hound will look up and stir your soul with his gentle, pleading expression. Mercy, what a pretty picture! No wonder Treeing Walkers are called the People’s Choice.

Let's unpack one word by name at a time. ""Treeing"" refers to a hunter who pursues the smell of his quarry until the quarry lifts up a tree for safety, the camping hound out of the bottom and barking loudly and distinctly, when It even takes a gun-driven hunter to come. ""Walker"" is Thomas Walker of Virginia, who was an important figure in the early development of the breed in the mid-1700s. The ""coonhound"" is a dog that is developed as a ""tree"" raccoon and sometimes, the big game.

The treeing walker conhound was developed from the walker foxhound, which evolved from the Virginia hounds that originated from the early English foxhound brought to the Americas. Originally classified as an English coonhound, the breeders of Treeing Walkers broke off from the English version in 1945 and were born to retain their desired qualities. It is a sharp, fast-paced, sensible hunter who has a clear, ringing bugle voice or a steady, clear chop with a change on the tree. It finds its quarry quickly and has excellent stamina and tree planting ability. Widely known for range, it can leave the original track if it picks up a strong smell. Highly competitive due to its speed, the treeing walker's reputation grew as night-hunting gained popularity.

Today the Treeing Walker retains the same color and similar structure as the Walker Foxhound and is sometimes described as a trailing hunter with a plantation instinct.