Origin of Name:   The West Siberian Laika or WSL, is a breed of spitz–type hunting dog. 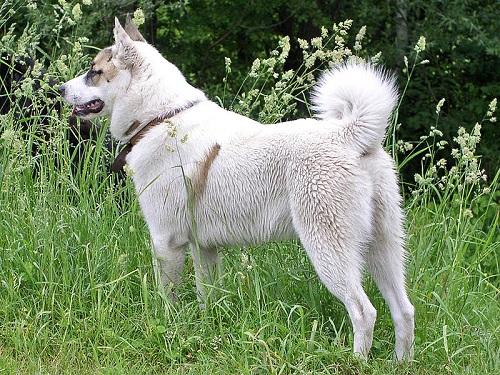 Like the West Siberian Like, the East Siberian Like, and the Russo European Like, Russians are part of a group of breeds of dogs that are considered Spitz types. The term spitz type, as commonly used, defines a type of dog that is thicker, longer and more often with white fur, pointed ears and a muzzle and a tail that usually curls back on dogs.

Although the exact origin of the Spitz type dogs is unknown, it is believed that all such dogs present today have their origins in the Arctic regions. Genetic testing of Spitz-type dogs has found that dogs in this group are most closely related to wolves, and are thus considered to be some of the oldest types of dogs. It is thus believed that it was the ancestor of these Spitz-type dogs that accompanied the wolves, and from that point human selective breeding leads us to the variety of dogs present in this category today.

In recent times humans have again associated Spitz type dogs with wolves to get dogs with an Alaskan Malamute looking like wolves.

The West Siberian Like is a daring highly versatile and intelligent Working Dog used for hunting sports and unlike other Russian Hunting Dogs, including the East Siberian Like and Russo European Like, this breed specializes in only one type of sport Can. This specialization is the main reason that this breed has survived and is one of the most popular Hunting Dogs in Russia to date.

In the nineteenth century it was important for a Hunting Dog in Russia to have the ability to be trained to concentrate on the game with the most valuable fur. Money received from a single silver-black sable skin can support a family of four for a year. As a result, a Hunting Dog with the ability to focus solely on a certain species may ignore all others, a factor determining whether the hunter and his family had money for food.

The original breeding process that resulted in West Siberian Lyca was the only breed of Lyca with this pro-selective hunting ability, a result of selective sampling from primitive dogs of the Mansi (Vogels) and Hunty (Ostyak) strains. These two species attracted Russian hunters due to their exceptional hunting ability, size, strength, endurance and extraordinary beauty. This initial two-stress selection process was combined with killing or keeping dogs that worked on every type of game from the breeding process.

This ability to hunt it to perfection with its expertise in one type of sport and its versatility really makes West Siberian Like so unique. The intelligence and versatility of the West Siberian Like provides us with a dog that when trained properly can use this selective ability for everything from small animals such as pine martins, squirrels or sable to big game such as wild boar, bear and moose. Could do anything to hunt. It is versatile enough to be trained to hunt birds such as pheasants, snakefish and waterfowl.

During the 1960s, Russian diplomats and government officials occasionally imported West Siberian likes into the USA, where these dogs were not bred and lived their lives as pets.

In 1992, a biologist, a graduate of Penn State University and a Russian-origin immigrant living in Oklahoma named Vladimir Beregovoy, imported a woman named Shelma and a male named Alex, who produced the first West Siberian lycra litter in the USA. did. In 1995, he imported another male named Roktop-Chekhov and in 1996, he imported a woman named Polly and a male named Vern. These five dogs formed the first breeding stock of the West Siberian Like within the United States. They initially registered him with the Federation of International Canine (FIC) with a suspected registry that has been reported to be associated with breeders of puppy mill dogs. Then finally a respected dog registry with the United Kennel Club (UKC). Mr. Beregovoy reported that at present, the total number of West Siberian likes in the United States and Canada is about 100 dogs. Most of these dogs belong to hunters in the northern United States, Alaska and Canada.

The original breeding process of using selective specimens from both primitive dog Mansi (Vogels) and Hunty (Ostyak) strains resulted in a West Siberian lichen where either strain characteristics may be predominantly visible within a specific dog. The size, hunting habits, and coat color variations in both forms are basically the same, with a few exceptions. Both strains will have males 19–20 at the shoulder and females 18–19 at the shoulder, both forms having a slightly elongated, nearly square body. The Mansi breed of West Siberian Lyca will be slightly lighter, with narrower chests and longer legs. The head will be longer with longer snout and ears. Both varieties will weigh between 40–60 pounds, with males usually being heavier.

The Hunti strain of West Siberian Lyca will be stockier in construction with a slightly rancid appearance. The head is wider than the Mansi strain with shorter ears farther and slightly shorter muzzle. The guard hairs on the neck and shoulders around the face will be more prominent than the Mansi Likes.

The West Siberian Like coat is a double coat of stiff straight guard hair with a thick, soft undercoat. The guard hairs around the head and shoulders are particularly long and stiff and with very thick undercoats that form the thick structure of the dog's face. The tail hair is also longer and thicker than the rest of the body giving it a full look.

The most common colors are black and white, wolf brown and red or light red, the brown coat can vary in color from almost white to almost black. Brown can also be mixed with red to create a brownish red coat. Sable coats that combine black and white or brown are also common. Coats with white patches in various proportions are also permitted by breed standard such as white dogs with light red and brown noses.

This breed is easy to train, they are good watchdogs and are kid friendly

To show Westy his best, it is necessary to be prepared regularly. Separating (or breaking) old, dead hair is the traditional method of caring for a terrier coat, and this is the grooming method that should be used if you are interested in showing your dog. Pet owners often cut their dogs' coats for cleanliness. Most people look for a professional groomer who will help maintain that beautiful vesty look. Usually the groom's visit every 4 to 6 weeks will work fine. It is important to brush and comb daily. Because the coat of the vest is hard, frequent bathing can do more harm than good.

Smart, confident, adaptable, and endlessly entertaining in play, the adorable Vesti has captivated owners for over 300 years. Like all terriers, the Westies were restricted to working alone. This terrier can make independence training a challenge, but thanks to his deep intelligence, the Westies take patient, consistent lessons that are kept upbeat and interesting. Despite their size, vesties are strong, crap dogs that require little pampering.

The Westies love to cry and play, and they enjoy a nice walk. Since by nature they will run behind anything that moves, the breed does best in a fenced area or on a leash. With their intelligence, energy and do-it-yourself attitude, the Westies excel in a variety of canine sports and activities, including obedience, rally and agility. True to the original intent of the breed, they have a tendency to land and are superstars at Earth events.

The West Highland White Terrier should perform well on high quality dog ​​food, whether it is commercially manufactured or prepared at home with the supervision and approval of your vet. Any diet should be appropriate for the age of the dog (puppy, adult, or senior). Some dogs are at risk of being overweight, so watch your dog's calorie consumption and weight level. Treatment training can be an important aid, but giving too much can lead to obesity. Know which human foods are safe for dogs and which are not. Contact your vet if you have any concerns about your dog's weight or diet. Clean, fresh water must be available at all times.

West Highland white terriers are usually healthy dogs, and responsible breeders check their stock for health conditions such as heart disease and patellar luxury. Vesti's teeth should be brushed frequently using toothpaste formulated for dogs. Regular visits to the vet for checkups and parasite control help the dog ensure a longer, healthier life.