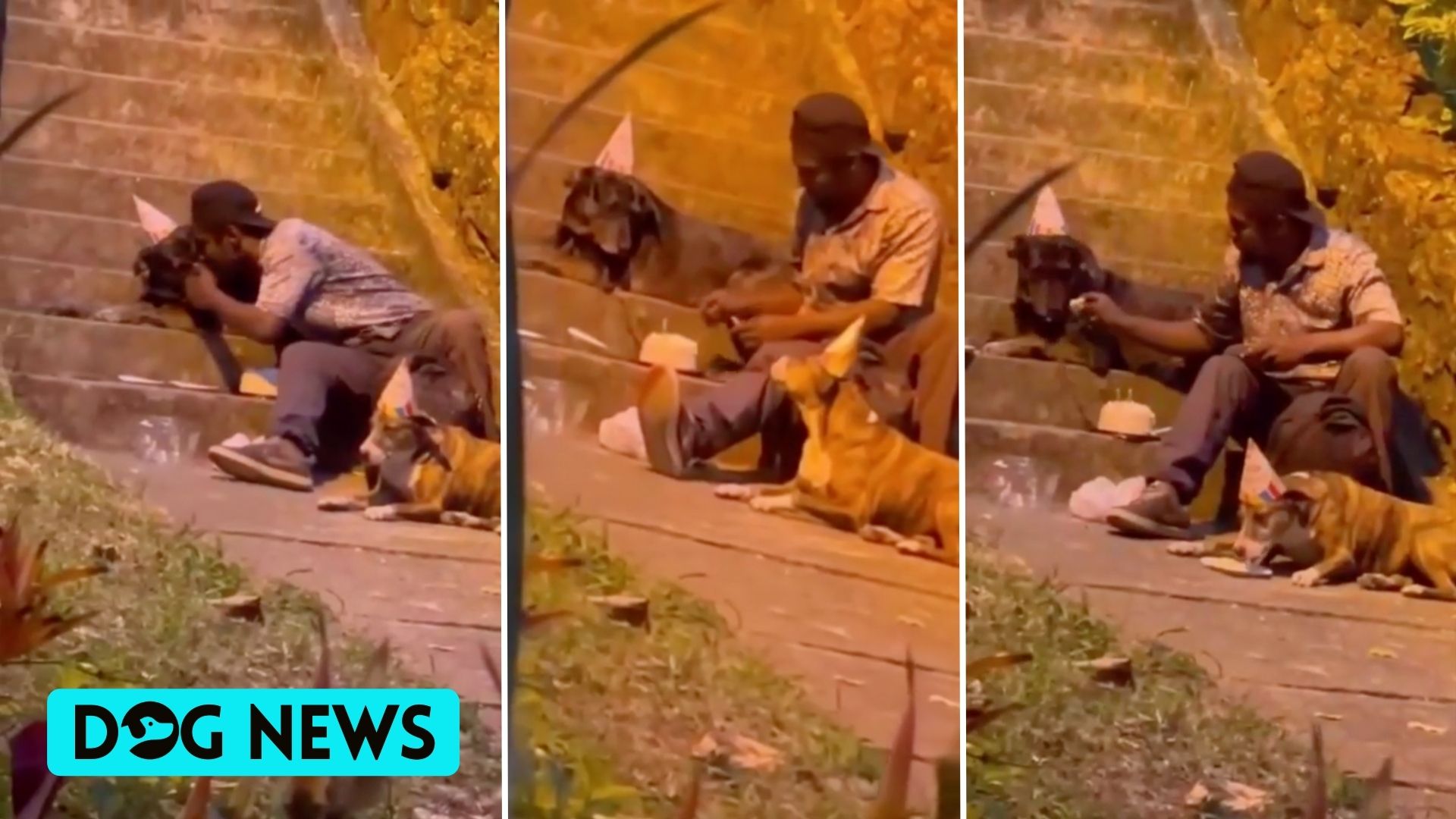 Home » A homeless man’s heartwarming celebration of his dogs’ birthday

A homeless man’s heartwarming celebration of his dogs’ birthday

Having limited means can not be an excuse for being loveless. A homeless man proves this in a video circulating on the internet.

In the video, a homeless man can be seen with two dogs sitting on the stairs. Both the dogs have party caps on. The man uncovers a cake and puts it on the stairs near him. Then, he puts two candles on the cake and lights them.

He starts singing Happy Birthday to his dogs and blows the candles. He cuts the cake and feeds it to them afterwards. The whole incident is captured by someone standing a short distance away, seemingly hidden from the whole fiesta.

The man is reported to be Choco, a homeless street dweller of Bucaramanga street, Colombia. Choco spends his life on the street with his two dogs, Shaggy and Nena. Shaggy is 4 years old while Nena has been with Choco for the last 10 years.

Choco is often seen wandering along the streets with his dogs. He was captured on the camera celebrating Shaggy’s 4th birthday. The video was uploaded on the Instagram page of @roteloperiodismo which is run by Rotelo, a journalist.

After being uploaded, the video earned worldwide love and admiration. People could not express enough love towards the homeless man who has a heart bigger than a palace.

When asked about the incident, Choco reported that he celebrates his dogs’ birthday every year. Nena is going to turn 11 this November and he will celebrate her birthday too.

Choco gets emotional towards the end of the video celebrating his friend’s birthday. The video leaves everyone in tears. After the video got famous, Rotelo uploaded another video where people can be seen offering money and food for Choco and his two dogs. People expressed their gratitude to Choco for having a golden heart and showing true humanity.

The real name of Choco is reported to be Jose Luis Matos and is originally from El Penon municipality.

Many videos of celebrities and common people celebrating their dogs’ special days are circulating on the internet nowadays. People want to make their animal friends feel special and let them see how much they mean to them.

Though, the lovely act of a man who has nothing to offer to his dogs except his love wins hearts all over and proves that a dog asks for very little to love you back.

Also Read:- Dog’s Innocence Captured, He Buries His Snowballs Delicately In The Snow Itself.

PrevPreviousDog’s innocence captured, he buries his snowballs delicately in the snow itself.
NextA video of two dogs getting a blow-up in the wind garnered 7 million views on InstagramNext