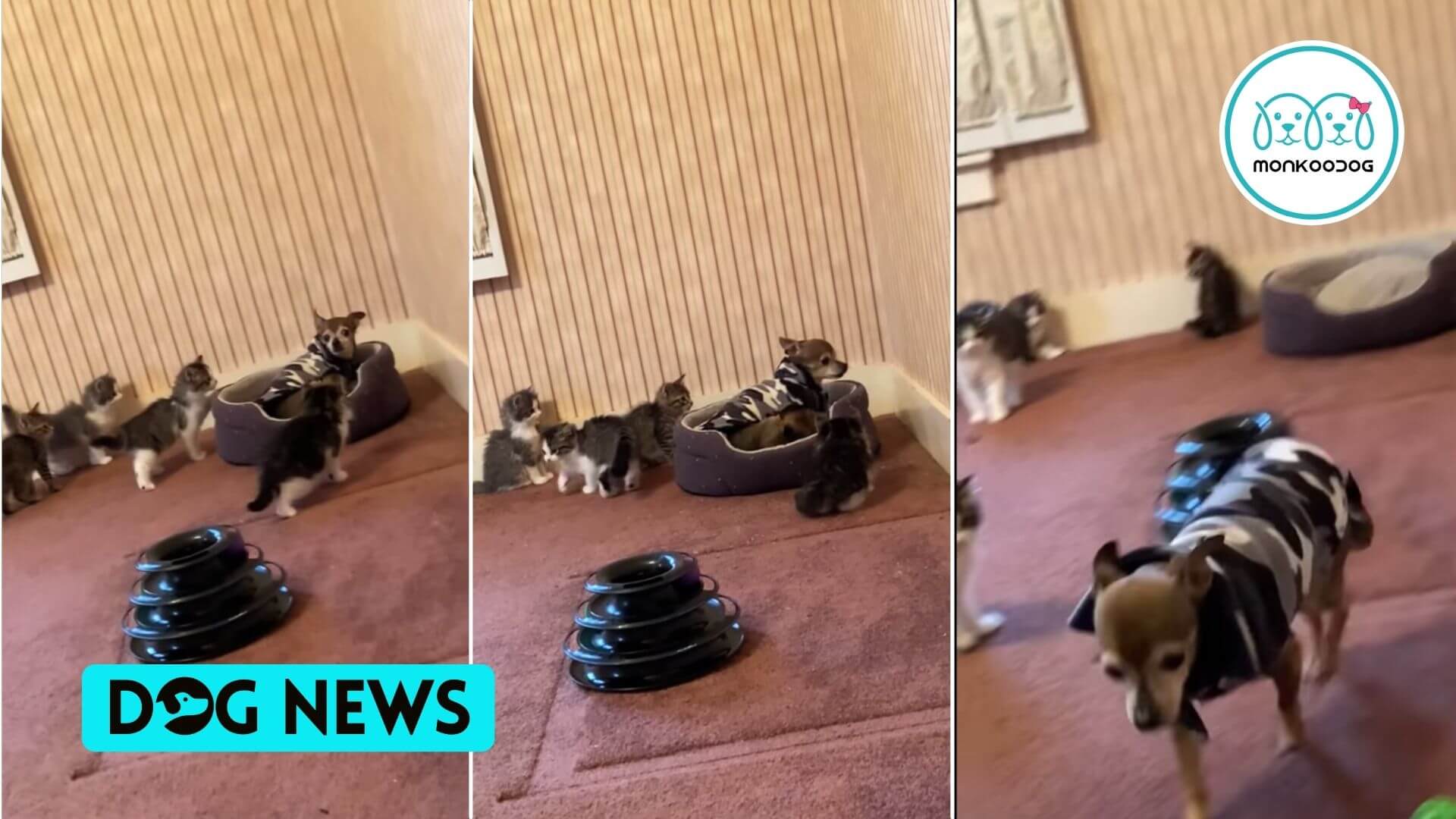 Home » A litter of kittens corner’s a resting Doggo, his reaction is simply adorable!! Watch out for this winsome video

A litter of kittens corner’s a resting Doggo, his reaction is simply adorable!! Watch out for this winsome video

There are two types of people in this world – one who adores dogs and the other who are ardent cat admirers. And it’s seldom that we witness a truce when it comes to deciding which of these charming animals makes a more lovable companion. However, thanks to the power of the internet,  we’ve found a video that will see both these groups shaking hands and gushing over collectively with Aww!!

In a viral video, posted on social media by ViralHog on Friday, a litter of kittens can be seen surrounding a resting dog out of absolute curiosity. However, what steals the show is the Pooch’s reaction to these tiny furry babies.

In the video, a group of adorable kitties can be seen intrigued by the resting doggo in the room; so much so that these tiny babies can be seen approaching him, gingerly. Overcome with all the attention, the resting pooch Nugget set off his cushion, after the first few seconds of an overwhelming expression, leaving the kitten to scramble away in hurry. The entire unfolding is simply adorable to witness.

Sharing the details of the Clip, the doggo’s parent quoted in the caption -This is my male rescue dog, Nugget with our foster kittens at the SPCA I work for. They were quite feral and absolutely zealous when I got them, so we were working on socializing them to help their adoption, it is when this video was shot.

Also See: How To Train Your Dog To Stop Chasing Squirrels

The pooch’s parent from New York, USA, further added that Nugget seemed like the best choice for the socialization of these tiny feral kitties, owing to his calm behavior.

Soon after the video gracing the internet, it was flocked with netizens showering their love on this adorable sighting.

In fact, a few viewers were taken so deeply with this adorable interaction between tiny kittens and Nugget, that they went to decode the conversation between these adorable animals. Jannat Bint’s, a user wrote a fictional conversation reading- ‘Dog: ‘Who are these strange people? Kittens: ‘We come in peace. This is simply adorable.”

While another user, with a different take on Nugget’s fictional inner voice, commented “Nugget: For the last time kids, I won’t take you to see cats vs dogs at the playhouse!! You’ve seen this 13 times already,”

And so on. In fact, the commented section of this adorable video is as endearing as the unfolding interaction!!

PrevPreviousWatch: Dog got confused why ‘other’ dog is giving him so much attitude
NextWatch: How This Puppy Fails At Dog Obstacle Course In The Most Spectacular Way!Next