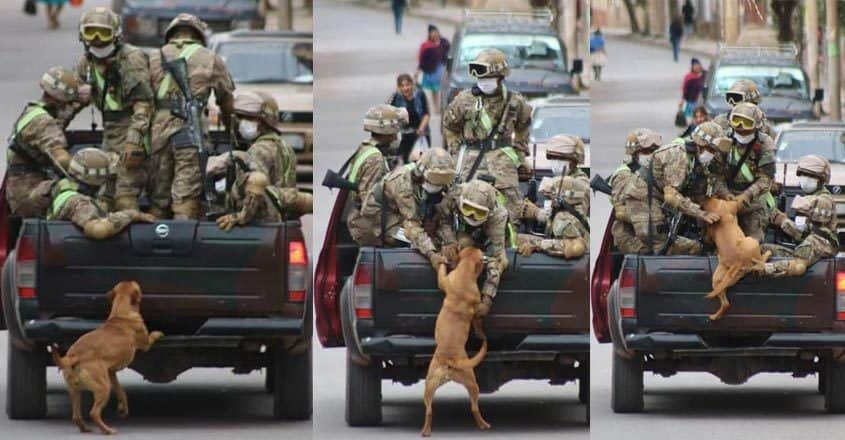 Humans are often called cruel and vicious. While on one side, we are torturing, killing or even abandoning animals, there is another group of humans fighting for these innocent beings and helping them.

With global lockdown, Facebook has become one of our major sources of entertainment ourselves. Memes and the variety of stay at home challenges have become an everyday occurrence.

One such Facebook post has gone viral due to a different reason. Two street dogs were filmed chasing Military vehicles in Bolivia and were literally trying to jump into the open back vehicle.

What happened next was way more surprising. Militants are often known to be indifferent and cold unless in a dire situation. Their entire personal keeps most of the criminals scared and uncomfortable.

However, in this situation, it was clearly evident in the post that the military personnel were very concerned about both the dogs and they simply lifted the dogs into the vehicle without much hesitation.

People all over the world began to praise the military men for their deed and wanted to know more about what happened next. Picked from the streets of the city of Tupiza in Bolivia, the dogs have now been taken in as a member of the military.

Military adopting street dogs has once again focused the limelight on the issue that instead of buying dogs from random breeders, choosing a rescue or a stray is often a much more benevolent and genuine deed to do.

The act of kindness on the mart of the Bolivian Military force has instigated thousands worldwide to reconsider buying dogs instead of simply adopting one that needs help.