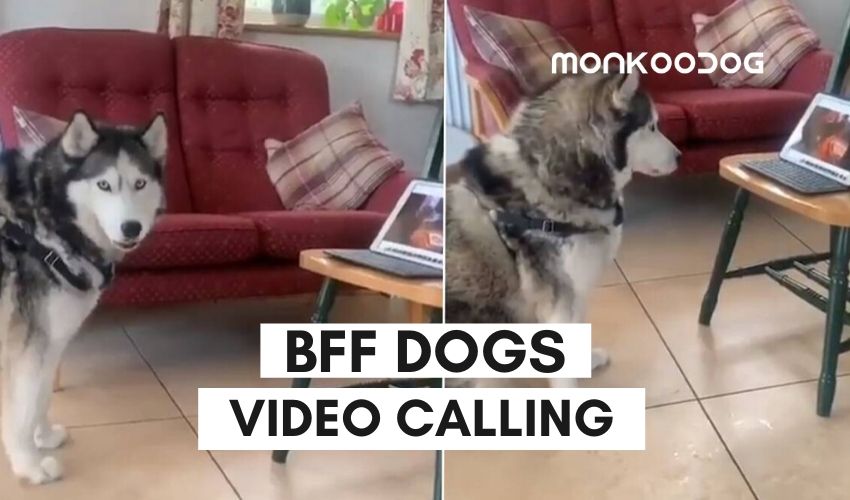 If the Covid19 infection alone was not enough, the Lockdown imposed has been taking a toll on us. The restrictions of stepping outside the boundary of your own home mean no meetups or gatherings, let alone exploring.

That is definitely tenfold worse for dogs. Imagine not being able to go out for those precious few hours of the walk and run outside or meet your favorite four-legged friend for weeks together. One man found a great solution to the problem for his dog and the solution has the world going gaga over it.

We have never been more thankful for technology than today. Thanks to the video calling facility, talking face to face with friends and families has become a lot easier and more fun than before. A man from Ireland decided to use the same technology to help reunite his pet dog with her best friend whom she had not met in a long time due to the Lockdown.

Jeremy Howard adores his husky pup Leika and there is nothing he would not do for her. Leika and her best friend Henri often met up during walks and playtimes at the park. They both certainly had a lot to speak about and probably bitch about their owners too.

Since the lockdown was imposed in Ireland, things have been very quiet in Jeremy’s place. Leika was definitely missing talking to Henri. That’s when he decided to experiment with zoom video calling.

The result was hilarious. Once the call connected, the conversation between Henri and Leika went on for minutes together and it was certainly a hilarious event to watch. They both had a lot to talk about or rather howl about.

Jeremy even posted that Leika was certainly more happy and energetic after a few minutes of conversation with Heri and Jeremy plans on occasional video calls until the lockdown ends to keep Leika happy. People have been sending a lot of positive comments since Jeremy posted the video call log on his social media a few weeks after the incident.