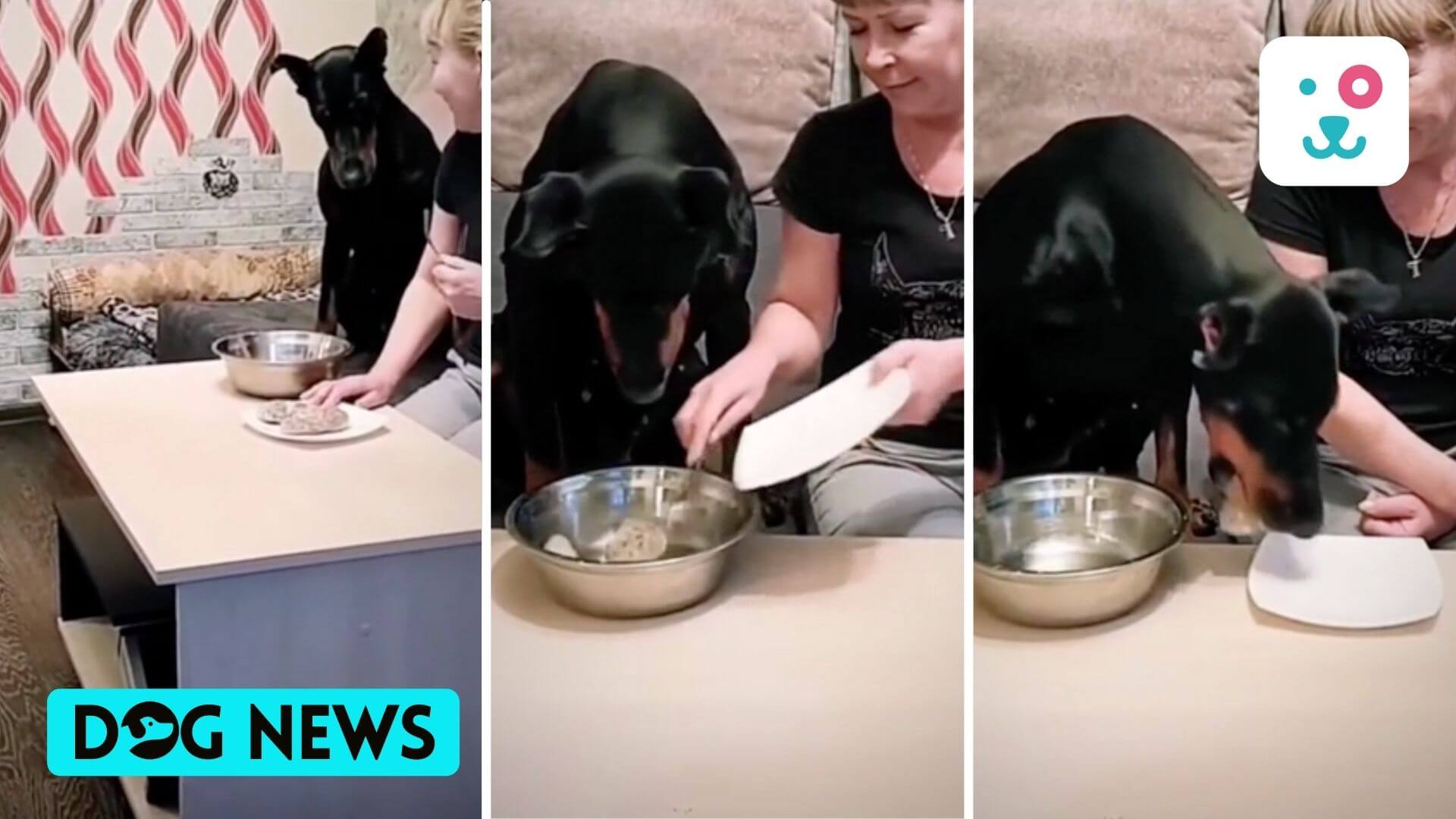 Home » Dog brings his food bowl next to a woman’s plate but what he does next is worth watching.

Dog brings his food bowl next to a woman’s plate but what he does next is worth watching.

If you are a Cynophilist, this is something you are going to love. Dog brings his food bowl next to a woman’s plate but what he does next is worth watching. Even if you are not, this video is so cute that everyone is gonna go ‘ Aww’.Though you might be aware of all those dog videos where our cute furry creature surprises us with their cute, adorable, and smart actions but this one is a little too cute.

In the video that went viral on social media recently, you can see a dog asking for food when he saw his counterpart human eating. This video is also going to make you laugh as it is not those ordinary videos where dogs ask for food but there is a twist to it.

The video starts with a woman sitting at a table with food on her plate. A few moments later, it can be seen that a dog walks into the frame and brings his food bowl next to the woman’s plate. He looks at the woman adorably at the same time. The woman gives a little frustrating reaction but transfers all her food into the dog’s bowl.

What makes this video different?

What happens next is what makes this video different. After seeing the woman’s plate empty and his bowl full, the dog takes out half of the food from his plate and puts it into the woman’s plate.

This is probably the sweetest gesture you would see on the internet today.

The video was originally shared on Tiktok with the caption ‘Sharing is caring.

Within five hours of being posted, the video went viral and gained around 1500 upvotes. The numbers are still increasing. The comment section was full of adorable and funny comments.

Netizens went crazy in the comments section with comments like ‘Humans don’t deserve dogs, some wrote ‘The video made my day.’

From TikTok, the video was posted to other social media platforms too. The video is garnering a lot of views.

Well rightly so, the action of the dog was appreciable and amazing. He noticed that he got all the food and the woman had none on her plate. He was sensitive enough to notice the human’s hunger although the woman was pretending for fun.

The dog sacrificed half of his food, a gesture not many humans are capable of. The dog for sure taught us the thing we use to hear as a kid from our parents ‘ Sharing is definitely caring.’

Also See:- Adorable Dog Playing Hide And Seek But Could Not Hide His Tail.

What do you think about the video?

PrevPreviousAdorable dog playing hide and seek but could not hide his tail.
NextIn a soul-warming video, a toddler comforts a dog in the noise of fireworks.Next