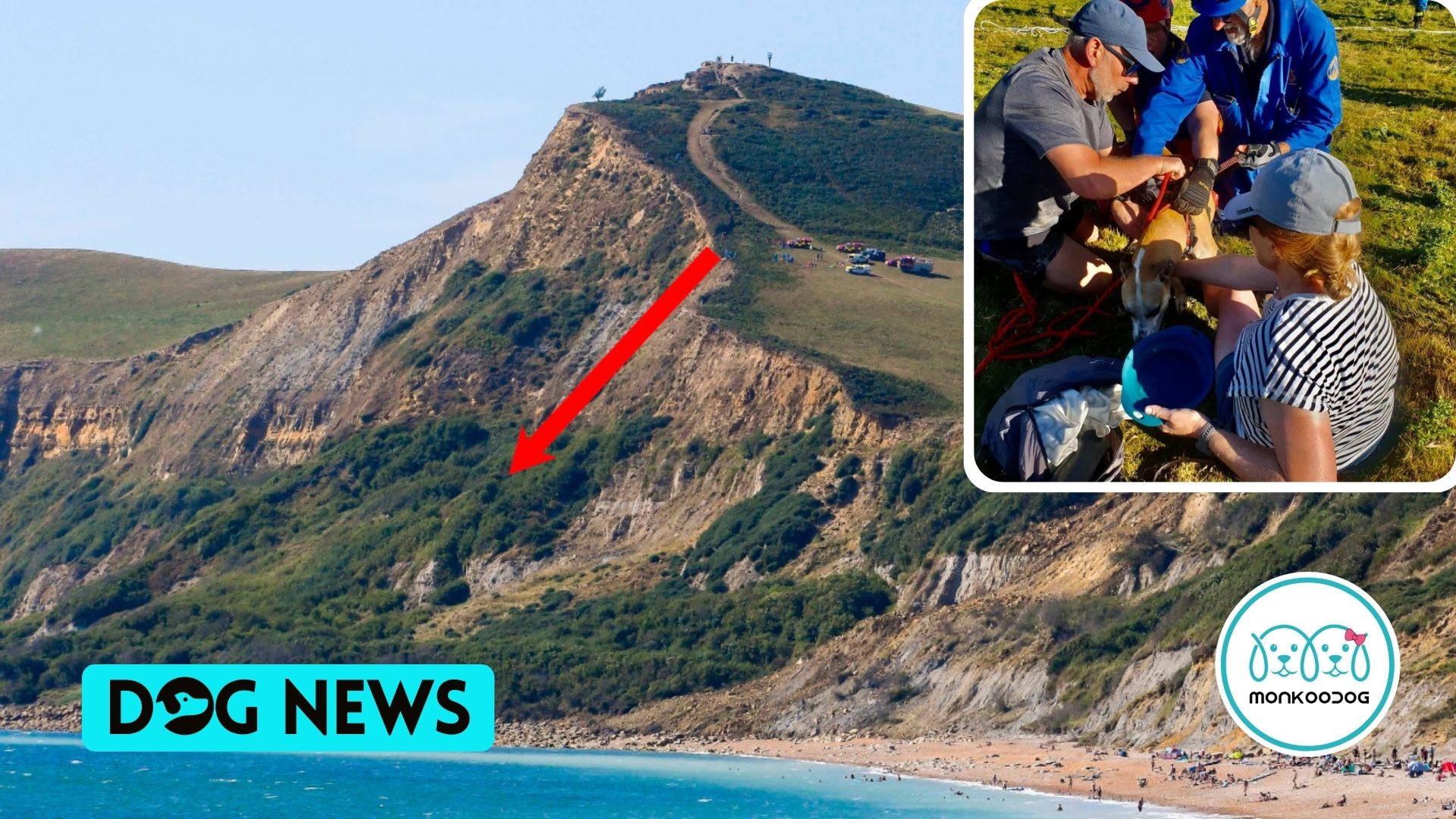 Home » Dog, saved by coastguards, Miraculously Survives a Fall over the edge of a 515ft seaside cliff.

Dog, saved by coastguards, Miraculously Survives a Fall over the edge of a 515ft seaside cliff.

Though miracles are quite rare and absolutely unpredictable, nevertheless, sometimes they take the reins of fate at the most unexpected moments, winding up with the best results. In one such incident, a dog from Eype, Dorset, inexplicably survived a fall over the edge of a 515ft cliff.

Laney along with her owner was walking along a coastal path when this astounding happening took place. It is believed that Laney the Whippet-crossed American BullDog, probably ran off her lead after she spotted an animal, chasing it and thereby tumbling over the cliff edge. Laney plummeted over the steep drop before she landed on a plateau 150ft below.

Witnessing the unfoldings the horrified owner Andrew Hetherington, immediately rushed in to save his dog. Andrew, walked over 4km (2.5miles) to reach the bottom of the beach, moving on to climb the cliffs, towards the point where Laney had landed. However,  Andrew Hetherington, was not able to reach far, as he himself was stuck in the mud, at 30ft up.

Eventually, a fire service rescue team was dispatched to reach Andrew, whereas coastguard cliff rescue technicians went on for the rescue of four-year-old Laney.

After four and half hours of thorough searching and locating, Laney the Whippet-crossed American BullDog was apparently found unharmed in thick brambles and the undergrowth. Following her extraction, Laney was placed in an animal rescue bag. She was recovered to the clifftop where Laney reunited with her relieved owners.

The reunion was absolutely heartwarming. And the entire episode, well it was nothing less than a miracle, for Laney to survive the 150ft near-enough sheer drop to the plateau. Terry Hoare, of the Beer Coastguard Rescue team, commented that the dog was definitely a lucky girl.

Mr. Hetherington, Laney’s owner, expressed his massive gratitude, paying tribute to Beer Coastguard and Dorset and Wiltshire Fire Rescue, for stepping in timely and helping him reunite with his dog.

Following this incident, the Coastguard has urged people to be absolutely careful and keep their dogs on a lead while walking them on the coast path. They further requested the pet owners not to recuse their pets themselves and rather call in for help.

PrevPreviousScientists Reveal the Dog Breeds most Susceptible to Ear Infections. Basset Hounds, tops the list
NextDog on an Endearing Paragliding Journey over French slopes with his Owner. Check out the viral video.Next