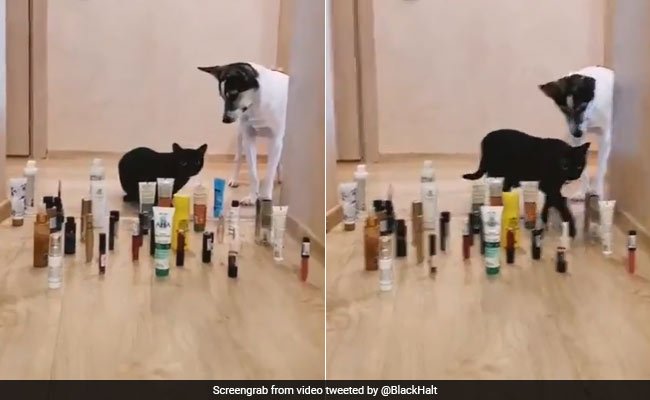 The world is in a state of massive shock and fear due to the global crisis caused by Covid19. Amidst the global lockdown, dogs, and cats who are used to daily outside exploration activities are becoming distraught and restless.

To keep them active and interested many pet owners have begun creative indoor games and activities. One such epic game that has caught up with the global pet owners is the “obstacle challenge”

Some of the pet owners decided to take it a notch higher and see how their pet cats and dogs react to the task. Though most of the videos posted on social media handles of the respective owners were hilarious, one video had the entire world laughing out loud amidst the ongoing worldwide tension.

The 29-second clip posted on Twitter shows the owner creating a funny obstacle along one of the corridors of his home using all possible home used products like creams, shampoos, paste and many more.

Awaiting the final outcome patiently with his video recording switched on, he was in for one of the most comedic scenarios. His black cat assessed the scene quietly for some time and then expertly crossed all the obstacles using it’s super flexible body and just knocked off a few of the obstacles.

The white and brown spotted pet dog was an entirely different matter. Rather than assessing the scene, it was more confused as to what was in front of him. So instead of carefully maneuvering through the course, it decided to jump right over the obstacle.

Given the length of the course, he managed to topple most of the obstacles and leave the owner laughing like hell and contemplating who actually won the competition fairly?

With 8.2 million views in 3 days alone and over 67000 retweets and 155000 likes, the post by Buitengebieden seems to have people falling in love with the sweet camaraderie

PrevPreviousA Disabled Dog Rescued From the War-Torn Streets of Afghanistan
NextPet Shelter Rescues and Reunites Family With Lost Dog After 3 yrs of Waiting.Next