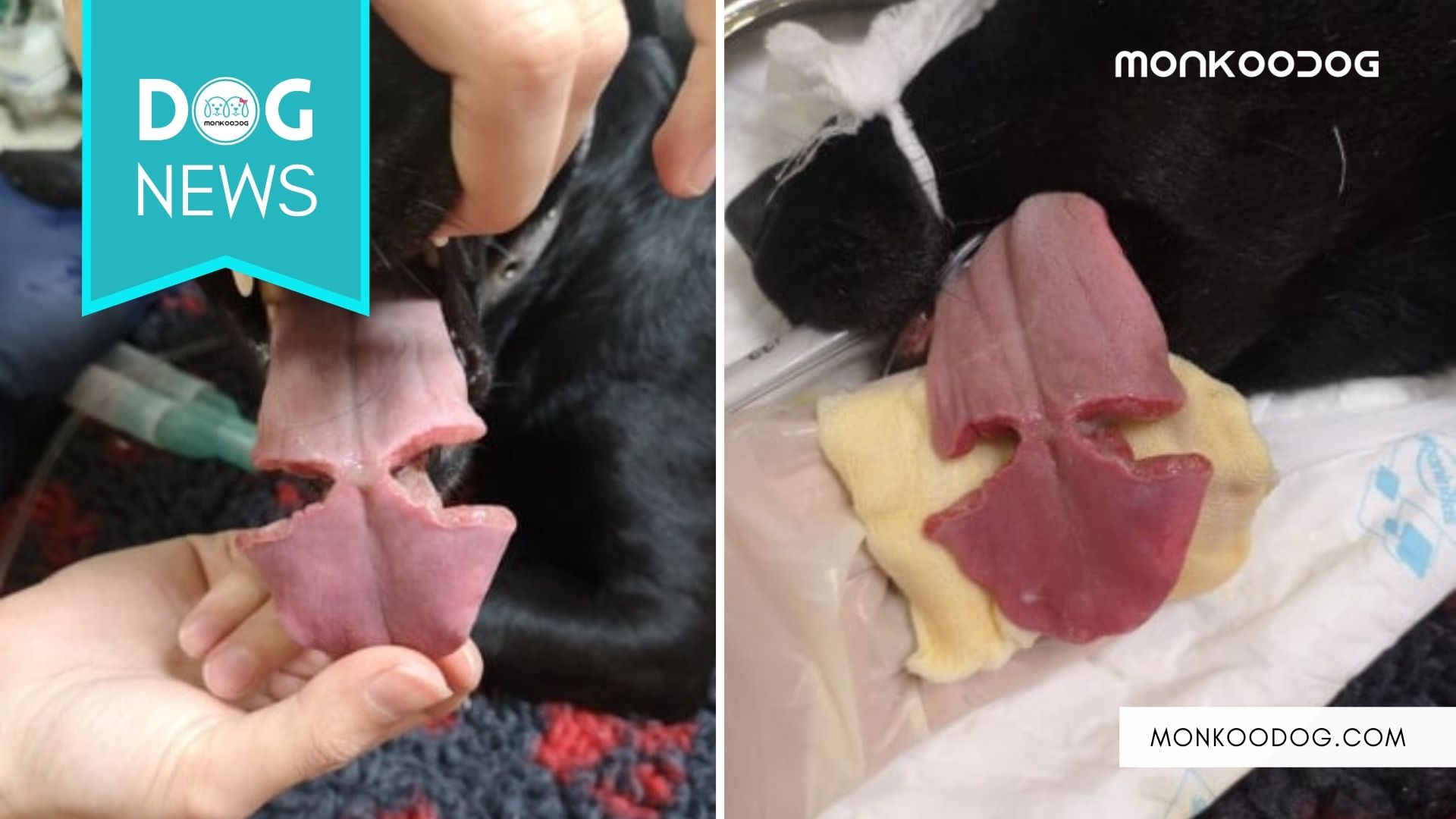 Home » Dog’s Tongue Stuck In A Rubber Ball, Got Split Into Two; Nearly Before After Surgery

Dog’s Tongue Stuck In A Rubber Ball, Got Split Into Two; Nearly Before After Surgery

A couple recently faced terrible tragedy when their pet Labrador’s tongue got stuck in a rubber ball. Helen and James Hartley’s little girl, Poppy, recently found herself in a challenging debacle where she got her tongue stuck into the air hole of a rubber ball. The dog was left alone by her human caretakers when they were out for work for a while and upon returning, the Hartleys were horrified to find Poppy’s tongue stuck into the ball. They had no idea how long the poor girl was left like that with her tongue jammed painfully through a rubber ball. They managed to free her tongue from the ball. Even after that, when poor little Poppy was acting strange, the couple rushed their baby girl to the Foxhall Veterinary Clinic in Ruskington, Lincolnshire.

After a thorough check-up, Poppy ate a treat which is why the doctors prescribed her medicines to help with the swelling and scheduled a check-up only a day later to track how far along the damage was. Over the next following days, further tragedy struck little Poppy. The parts of her tongue that were stuck in the rubber ball seemed to turn necrotic and die instead of getting better.

The veterinary clinic posted that unfortunately, the red line on Poppy’s tongue changed into more intense bruising which then started to smell and form white plaques on the top. These plaques further turned black, necrotic, and died off. The suffering Labrador puppy was thus left with two big slits on either side of his tongue where the ball had been. The poor girl was also struggling to eat and drink because of this which is why the veterinarian hospital booked her into surgery with their vet, Sophie.

The surgical team at the hospital removed the dead, necrotic bits on Poppy’s tongue and stitched it back up with dissolvable stitches.

Helen explained later just how traumatic the entire experience was for them and how grateful she is to the hospital team for taking good care of her puppy dog. She says that Poppy was immensely well-loved at the hospital and was looked after by a dedicated team of professionals who managed to send Poppy on the road to recovery soon.

Foxhall Veterinary Clinic also wrote how special Poppy was to them and how much they will miss the adorable fur-ball on her daily visits to the clinic.

Poppy is doing much better now and can eat, drink, and give sloppy kisses like before again, making the Hartleys eternally grateful to the medical team in Foxland Veterinary Clinic. The brave little girl is well on her way to recovery and the Monkoodog team salutes her resilience!

PrevPreviousMP Man Gets His Dog Back Through DNA Testing
NextTimid Little Golden Retriever Loses It After Seeing Darth Vader; Hides Behind Sofa Till Everything Is AlrightNext