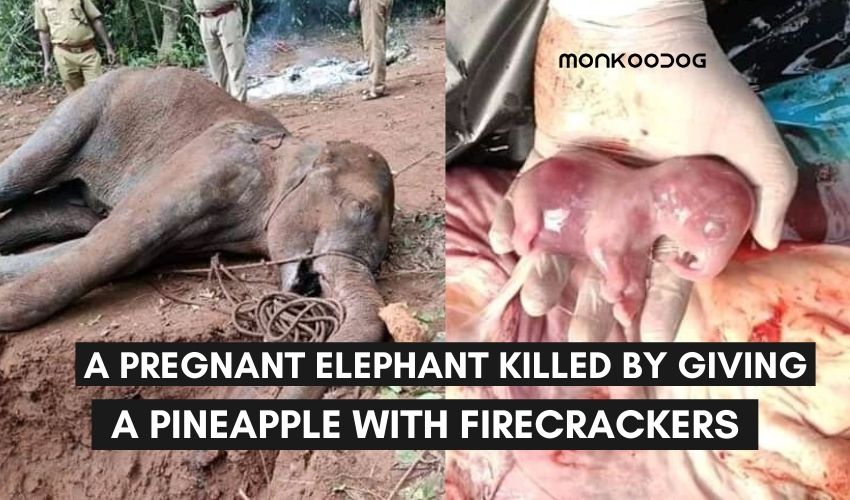 There is a common belief that “Mother Nature has her own ways to take revenge when humans lose their way” but this time around Humans decided to once again trample over humanity and Mother Nature together.

Kerala also is known as “God’s own country” and yet there live inhuman beings who derive pleasure in torturing and killing animals. The incident that has caused the massive worldwide outrage occurred in Malappuram Town of Palakkad, Kerala.

A 15 years old young Pregnant Elephant had wandered into the town of Malappuram in search of food. Unknown to her, Malappuram was already notoriously known for their extremely psychotic and murderous attitude.

Allegedly a few villagers decided to feed the hungry and pregnant elephant a pineapple. However, this is where things get more vicious and inhuman. The people of the town stuffed the pineapple with firecrackers before feeding her.

Within minutes of eating the pineapple, the elephant suffered massive burns on her tongue and mouth. Unable to tolerate the pain and burning sensation she fled into the cooler water of the nearby Velliyar river.

As the people watched, the elephant bled to death after prolonged suffering of over 4 hours. Once the footage of the incidence went viral, requests from all over the world began to pour in to take strict necessary action against the criminals who participated in such a horrendous act.

According to reports, people of Malappuram are known for scattering poison and other such dangerous substances on the roads and waters to mass kill birds and animals. Several times they have been on news for various such animal cruelty related incidences.

Appalled to hear about what happened in Kerala. Let’s treat our animals with love and bring an end to these cowardly acts. pic.twitter.com/3oIVZASpag

The tweets in relation to this incident have also garnered the attention of social activist Greta Thunberg and Maneka Gandhi, who all have come forward seeking justice and necessary severe action against the people who took part in this act.