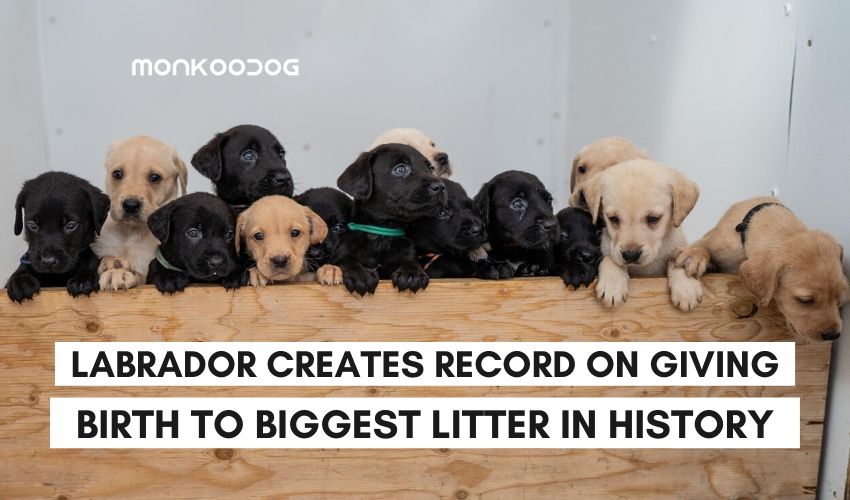 Home » Labrador creates new record after giving birth to one of the biggest litter in history.

Labrador creates new record after giving birth to one of the biggest litter in history.

Dogs are known to give birth to 4 to 6 puppies at a time. There is nothing unusual about it. Labradors in general are also not any different. However, Hazel Hedges was in for a big surprise when it was time for her beloved labrador Bella to welcome a new litter.

Hazel Hedges, the 31yrs old registered breeder from Wentworth near Cambridgeshire was definitely not prepared for this unexpected but happy incident. As per an interview conducted on 29th of May, 2020 by Daily Mail UK, she said when Bella was taken for an ultrasound, the scan showed 6 puppies.

Bella in fact did not look like she was on route to deliver such a huge litter. Being a healthy and happy dog, vets were expecting a normal and healthy bunch of puppies. However, when Bella’s water broke on April 18th, it was a different scenario altogether.

Post the initial 6 puppies as expected to be delivered by her, she kept popping tiny puppies at short intervals for the next 7 hrs until the count reached 14. The biggest surprise of all was that all the puppies survived and were declared healthy once the vet had them thoroughly checked.

Bella is a jet black labrador retriever while the litters’ father Scooby is a 4 yrs old Yellow Labrador registered with the Kennel Club too. Their litter comprises a cute and adorable bunch of 4 black girls, 4 black boys, 3 yellow girls, and 3 yellow boys.

Hazel and her partner James have been breeding dogs officially for the past 5 yrs. Bella, their adorable labrador has been a part of their life since the beginning of the journey. This was supposed to be Bella’s last litter and she definitely gave an awesome retirement gift to Hazel.

Hazel was extremely busy handling the aftercare for the lively bunch of puppies so she only could post updates about Bella and her pups over a month after the delivery. Within minutes of her online post, the media’s eyes caught the attention and they wanted to have an exclusive interview with Hazel and Bella.

Turns out that Bella had created a record of her own just before retiring. A labrador from Scotland delivered 15 pups in 2014, which set a world record. The next closest record was held by another Labrador from Kent, which gave birth to a litter of 12 pups in 2018. Bella now officially is the mother of one of the largest litter in the United Kingdom and the world.

For Hazel, it is even bigger news as all the puppies have found their forever homes within days of her online post. Once the puppies are weaned and ready, they will be sent packing to 14 different locations all over the UK.

PrevPreviousDog Keeps Waiting At the Hospital For the Owner 3 Months After His Death in Wuhan, China
NextKate Middleton’s brother James Middleton’s new puppies are helping in donating for an important cause.Next