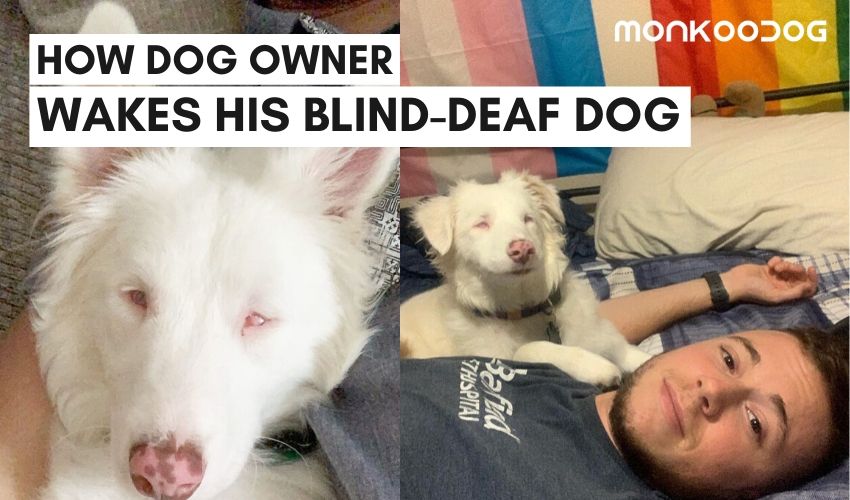 As you scroll through your social media feed, you are bound to come across a very cute picture or video of dogs that make you go Aww and you can’t resist sharing it with your friends. Insanely cute posts go viral and gain hearts from all over the globe.

Among such popular posts, the most recent phenomenon is a TikTok video of a pet parent waking up his deaf and blind dog.

Aiden Mann is a veterinary assistant from Tennessee and is the proud dad of Plum, an Australian Shepherd with birth defects; the dog is deaf and partly blind.

Mann uploaded a video on TikTok showing how he wakes up Plum in the gentlest way possible – a soft blow under her nose. In the video, you can see him slowly creeping up to a sleeping Plum and waking her with a soft blow. Plum wakes up with a start but is immediately comforted when she feels the presence of Aiden.

This video has gone viral across various social media platforms and has over 52 million views. Even celebrities couldn’t stop themselves from commenting on the post. People took to the comments section to express how this post melted their hearts. One said, “Who cut onions here”, while another expressed, “It made my day”.

After this viral event, Mann says that he didn’t expect such a huge number of views and goes on to share his experience with Plum. Though he was initially skeptical about taking in a dog that has special needs, he said it was love at the first second and he took her home.

Mann uses this attention to make people aware of a dangerous genetic practice, double-merle breeding that causes birth defects like Plums. When merle patterned dogs are allowed to mate, each puppy from the litter has a 25% possibility of having birth defects like vision and hearing impairment, lack of color pigment or excess white coloration.

Thanks to big-hearted people like Mann, even special dogs can find happy homes and this video will surely encourage others to share their lives with one!