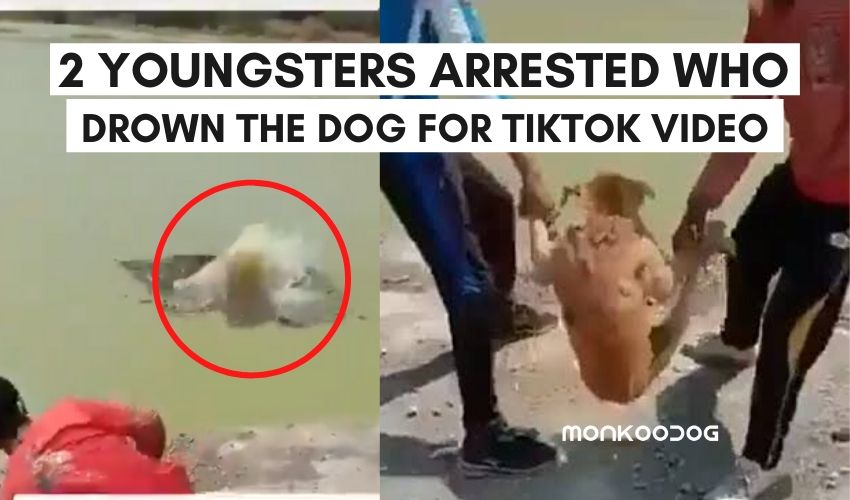 In the words of TikTok maker Zhang Yiming,” Tiktok was created for the unstable and jobless people, but he never thought India had too many of that kind of people.” The largest consumer base of the Chinese app is surprisingly India.

Every day the users or so-called influencers of Tik Tok have been known to get embroiled in some of other controversies and issues. From rape instigation to acid attack, bullying, and animal cruelty, there is no limit to the cringe-worthy video content posted in TikTok by so-called celebrities with millions of followers and view counts.

In the latest rendition of viral Tik Tok video that went viral tagging millions of views, likes, and comments. Two youths are seen tying up a dog and throwing it into the pond to drown. As the dog struggles to stay afloat, both the men are seen pelting stones and laughing cruelly all along. The most inhuman instance is the voice of the boy singing a funny Hindi song about playing with dogs in the background as he kept recording the instance.

#tiktokbanindia
Got this Video via whatsapp , Please Ban tiktok . pic.twitter.com/j8uYP13FKE

Mumbai Police decided to investigate the matter as soon as the issue was raised by a few good samaritans. An official FIR was launched at Madhav Nagar Police Station on 23rd of May, 2020 evening to make the legal proceeding easier and faster.

Identifying the men in the video was impossible due to the mask they wore. To help the matter PETA, India had made an official announcement in regard to the issue and decided to reward 50,000 INR to anyone who would help in identifying the youth and help in arresting them. In case of correct information, the identity of the whistleblower would be kept confidential, they had mentioned alongside.

Finally, once the murky pond was identified as a location in Ujjain, MP, things became easier as Ujjain Police decided to collaborate. Sunny Borasi, 19 yrs old resident of the area and a minor whose name has not been issued were arrested within hours on Monday morning. Both the offenders have been booked under Section 34 and 429 of the Indian Penal Code and Section 11 (1) (a) of the Prevention of Cruelty to Animals (PCA) Act, 1960.

Tiktok has been embroiled in numerous controversies in the past few months and there have been numerous instances of extremely uncomfortable and dangerous videos being posted unfiltered in the app. Banning of TikTok has been in talks and hopefully this incident will finally nail the coffin.