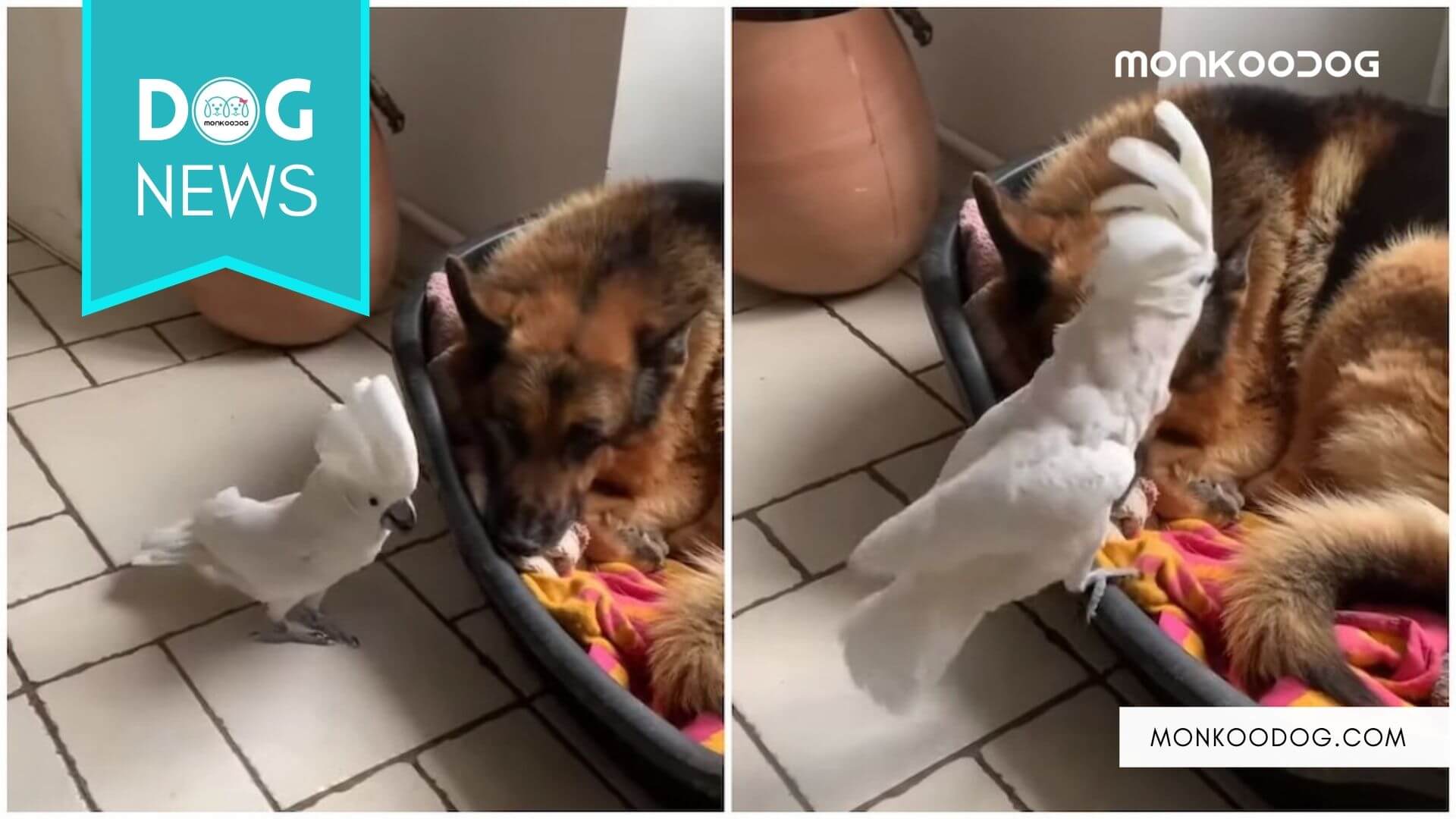 Living creatures have a very complex bond. The interspecies relationship has been a constant source of curiosity and marvel for researchers worldwide. While humans and their relations with other species can be easily explored and understood, it is far more difficult with others.

The complexities of these unnatural bondings and familiarity often become the source of some of the most amazing viral videos and footage captured. While cats and dogs seem to be the most common source of these hilarious episodes, there are random moments when birds enter the limelight.

Cockatoo is one of the most intelligent breeds of birds known to mankind. Known for their unique personality and very adamant attitude, they are very quick learners and are excellent at mimicry. It is amazing to hear these birds replicate voices with such accuracy that even the sharpest of ears can get confused.

Similarly, German Shepherds are among the most intelligent dog breeds known for their amazing skills and personality traits. One of the most common dogs used in the forces and defense industry, this breed is very observant, guarding in nature, and extremely wary of anything strange. However, they are also known for being one of the most loving and caring family dogs.

A recent video has taken the internet by storm because of a shocking camaraderie between a cockatoo and a German Shepherd. While the internet has many videos of smaller birds, ducklings, and other such birds interacting with dogs, this was very unique.

Posted in the YouTube channel – ViralHog, the short video begins with a very energetic and boisterous Cockatoo walking up to a beautiful German Shepherd enjoying a lazy day in its bed. Initially, the German Shepherd seems completely unbothered with the bird walking around. However, within a few seconds, surprising everyone, the Cockatoo begins to bark at the dog.

The numerous barking attempts from the Cockatoo bird don’t seem to bother the dog much until finally, it decides to respond back with its own barking and growling.

The owners who are residents of Saint-Jean des Ollieres, Auvergne, France spoke to the reporters from ViralHog and said that they were surprised at the interaction. Since they both seem to understand each other well, it was amazing to see the one who was supposed to bark and communicate was the one who remained silent and observant. In fact, it can be clearly seen in the footage that the dog could understand the Cockatoo’s bark well enough to look at it and interact in a very odd way.

Despite the Cockatoo’s attempt to drag out his buddy from bed, the dog seemed completely unwilling to get out. This instigated the bird further and it jumped right onto the dog bed in an attempt to get the dog’s complete attention.

The video maybe just a few seconds long but it certainly caught the attention of the worldwide crowd and has already garnered tonnes of views and comments since it was posted.

Also See: The Best Dog Breed That Will Boost Your Health & Personality