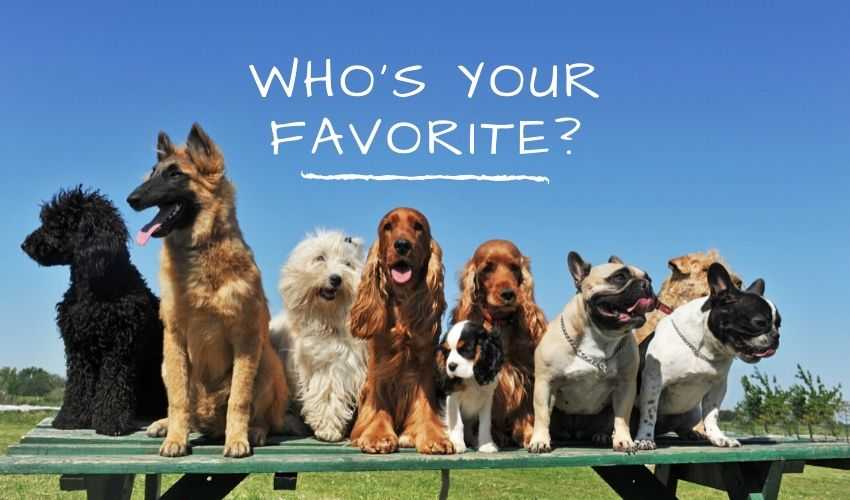 “A dog recognizes its master as its family” – this was the conclusion that was revealed through the MRI Scan of the Dog’s brain sometimes back. In this blog, we inform you about the Top Favorite Dog Breeds That Dominated the Last 100 Years of Trends.

Dogs have been a part of human civilization since the beginning of time. Ancient literature from Egypt, India, the Incan, and many other parts of the world has pictorial and written accounts of Dogs as an integral part and parcel of the lifestyle.

However, between the late 1800 and early 1900s, the relationship between humans and dogs began to transition into something much more profound and more emotional. From working dogs, they began to also play an essential role as companions and assistants in day-to-day life changes.

Dogs are often known for their fierce loyalty and immense unconditional love towards humans. This beautiful relationship is continuing without much change in the dynamics. However, with so many breeds of dogs and their unique character traits, it is not surprising that there has been a rise and fall in favouritism.

Also See: How to Calculate a Puppy’s Weight Based on Its Age and Breed?

No dog is ever less lovable or essential, but with the changing trends, lifestyles, and socioeconomic changes, some breeds have been a higher crowd drawer than others. Listing this iconic change in the direction of the most favourite kind of dogs of the last century is a tough job.

Based on the historical accounts, a rough estimate conclusion can be drawn which breed has dominated the charts every decade since the advent of the early 19th century.

The early 19th century favourite, according to the American Kennel Club, was the Koolies. One of the most loved breeds during the time, it was a crowd favourite for its natural temperament and high trainability. Despite being a herding breed, they were known for being an excellent companion.

The 1910s -The gentleman Boston terrier

The second decade of the 20th century saw a rise in favouritism towards smaller dog breeds. The Boston terrier was famous as the “American Gentleman” due to their quirky attitude. This highly intelligent breed was easy to train and equally good as a companion.

Even though the Boston terrier was a favourite, some of the other most sort after breeds during this time included Airedale terrier, Coolie, French Bulldog, Cocker spaniel, and Pekingese.

The 1920s – The loving yet ferocious German Shepherd Dog

War was brewing all around the world, and every small bit of help was welcome. German Shepherd was introduced into the defence system for the first time as an experiment. Besides being highly intelligent and loyal, GSD showed how good of a working dog they are besides being a loving company.

Their caring and family-oriented temperament made them a valuable asset even among families. Other favourites during this period included Chow chow, Pekingese, Wire-haired fox terrier, Cocker spaniel, and Bulldog.

Boston terrier was always an inclusion in the top 10 favourite dogs for decades together. Besides being very small in size, the ease of training and maintenance made this Dog the most preferred pet for families and single men during the time. A great playful company, they also had a slightly higher life span than many other breeds.
Other crowd favourites during the time included Fox terrier, a Scottish terrier, Beagle, Pekingese, English springer spaniel, Pomeranian, and Bulldog.

The 1940s – The funny-eared Cocker Spaniel

This highly energetic mid-size Dog became an All-American favourite after winning the Best in the show at American Kennel Club’s dog show. The beautiful Dog with a very cheerful disposition was a definite lap dog who loved to snuggle on the couch, thus making it perfect for families with kids and elders alike.
Other favourite breeds during the 40’s era included Boxer, Dachshund, Pekinese, Fox terrier, English springer spaniel, Scottish terrier, etc.

Also See: The Ultimate Guide To a Perfectly Groomed Pet

Ease of trainability made them a must-have in most households during the time. The 1950s was more about smaller breeds, so the other favourites during the time included Boxer, Chihuahua, Dachshund, Boston terrier, Pekingese

Also See: How to Relocate your dog from India to the USA

The funny, energetic, and loving Poodle was bound to make a name for itself in the hall of fame as one of the best breeds of Dog ever. This beautiful water dog was especially great as an elegant beauty anywhere it went. Very affectionate by nature, they were also great companions during games and worked as well.

1980 – The return of the Funny eared Cocker Spaniel

Cocker Spaniel once again was back on the throne as the favourite after 20 long years of Poodle’s reign. Their easy trainability and energetic nature made them a natural choice as the favourite. The other breeds that were quite popular during this period included Labrador retriever, German shepherd, Golden retriever, Doberman pinscher, Beagle, Miniature schnauzer, Dachshund, etc.

One of the most preferred breeds of Dog for over two decades is a labrador. This large retriever breed is not only highly trainable and intelligent, but they serve as an excellent assistant dog as well as Therapy Dog. A loving family companion and a great hunting dog, the labrador, is exceptionally versatile in its character trait and usability.

Dogs will continue to be one of the closest companions of humans for centuries to come. However, with the deteriorating growing conditions of the environment and the changing facade, many breeds are on the verge of going extinct.

Lack of breeding, unwillingness to adopt, and many other such factors have contributed to the decline of some of the most beautiful and lovely dog breeds like Curly Coated Retriever, Bloodhounds, Otterhound, Glen of Imaal Terrier, Irish Wolfhounds, etc.

These breeds may not have been the trendsetters in any of the eras of the 1900s, but they all had unique character traits and abilities that set them apart from the rest—often regarded as high-priced and high maintenance. These breeds lay forgotten today never to be seen again in the next coming century.

With the entry of the 21st century, choosing to get one of these rare but beautiful breeds despite the many old crowd favourites may help in reviving them once again. After all, “a dog is a man’s best friend until death does us apart.”

Google Play Store
App Store
PrevPreviousWhy Your Dog Needs a Ball?
Next12 Dog Breeds that are Paw-fact For Living in ApartmentsNext