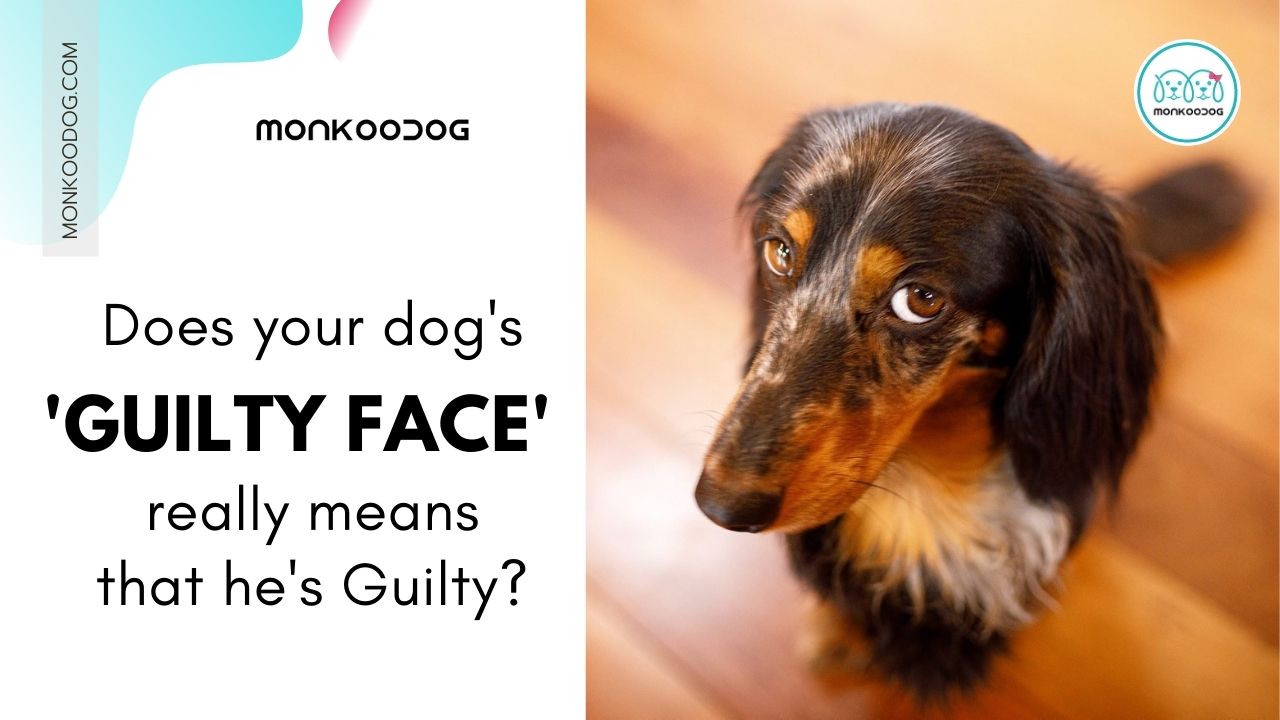 Home » Why Do Dogs Give That Guilty Look?

Why Do Dogs Give That Guilty Look?

You’ve presumably got the “Guilty look” from your pooches, or perhaps you’ve seen one of the innumerable Guilty canine images or viral videos on the web. In this blog, we inform you about Why Do Dogs Give That Guilty Look?

In fact, being a Dog Parent, you must be quite familiar with the telltale look of your kid who did something it wasn’t supposed to do.

Maybe it chewed through your favourite shoe or a box with some treat inside or pooped on the carpet. And when you see the look on their faces you instantly realize they did something that was not supposed to be done and, seemingly, they do too.

Being a human, you see that look and ascribe a common human emotion to it: ‘Guilt’. However, what does that guilty look mean? Are canines really embarrassed by their conduct when they seem to resemble it?

On any normal day, you return home to your canine, they bound happily to you, brimming with sways and wiggles. You converse with them and give them loads of affection. Your canine knows this arrangement and expects this welcome and consideration when you stroll in.

Also See: How You Can Make Your Dog Live Longer With A Healthier Life

You show up home to discover bits of shoes, papers and boxes tossed about, and kiddo sitting in the corner.

What do you do?  Well, like any normal parent you might have a major “Episode,” backing it up with a good lecture on your pooch being quite the naughty dog.

Following you up, your canine may as well turn its head down and gaze up with that classic guilty face. Yet, what are they really thinking?

Dogs Sense Something Is Wrong

If you reflect on your actions, you may note the distinction between your body language during your lecturing and during an average daily interaction.

While angry, you may be using a  different tone of voice, giving very stern looks or not touching your canine as you typically do.

Your canine as well understands the distinctions, which to them seems completely different from the normal day behaviours, hence indicating that something is awry.

Your canine is attempting to calm you and maintain a strategic distance from any further conflict.

However, often Individuals, misinterpret this ordinary non-verbal communication as “Guilt”. But by doing as such, we are just making suppositions about your canine admitting to some wrong-doing and feeling embarrassed about getting busted.

Also See: The Dog Breed You Should Adopt According To Your Zodiac Sign

But where is the proof to prove this though?

Dogs Do Make A Connection, But It’s Not Likely “Guilt”

If you logically consider why would a canine comprehends that the trash on your floor isn’t right, do you really think they realize the cost of your carpet, flooring, germs, and the time you put tidying it up?

Well, these are everything that would mark as bad behaviour or a sense of wrongdoing, but only in the case of the social animals that can think they are human beings.

Expecting your pooch to work through a circumstance like this would mean canines are competent of some high–order thoughts and sentiments. They’d need to associate your response to the physical reason you’re vexed i.e. the wreck.

At that point, they’d need to interface the wreck to their own previous conduct and set up everything to understand that their conduct caused your response.

After all of that, they’d need to feel grave for creating a situation that made you angry leading to lastly performing non-verbal communication to convey those emotions of regret to you.

While it is a struggle for even human kids and numerous adults, to make out all of those complex connections and feel guilt or shame about what they’ve done. It’s definitely quite difficult for your four-legged kid to do the same.

Possibly some canines may be able to put it all together nonetheless, there’s no research to support it. However, there is research on the contrary.

A guilty canine may:

Yet, your canine’s guilty looks may not depict guilt by any means; instead, it is undoubtedly a response to a human’s vexed reactions.

Also See: How You Can Get A Pomeranian For Your Home

Why do Dogs Who Aren’t Guilty Still Look Guilty?

Canines are sharp observers of human conduct and have appeared to decipher human signals, such as pointing, shockingly better than primates.

At the point when a human seems resentful, a canine will frequently react with mollification motions intended to diminish the outrage and settle any possible aggression.

This conduct can incorporate endeavours to look more modest and non-threatening, such as grovelling, bringing down the head, or peering down.

These appeasement signals are most likely destined to show up when a canine is being chastened. In any case, a few canines figure out how to associate specific circumstances, similar to a potty mishap or destroyed paper, with the furious or upset attitude of the dog parent.

At the point when this happens, a canine may show submission gestures — or what we call the blameworthy or guilty look — to concede a scolding.

Accepting that a canine is guilty on account of the manner in which his acts can detrimentally affect both canine and parent.

At the point when a canine neglects to satisfy a proprietor’s norm, the proprietor may feel legitimized in getting angry with the canine for the absence of compliance.

Be as it may, labelling a canine as guilty accuses the canine, who should “know better,” and makes light of the owner’s obligation regarding the canine’s conduct.

Also See: Pro Tips For A Road Trip With Your Dog