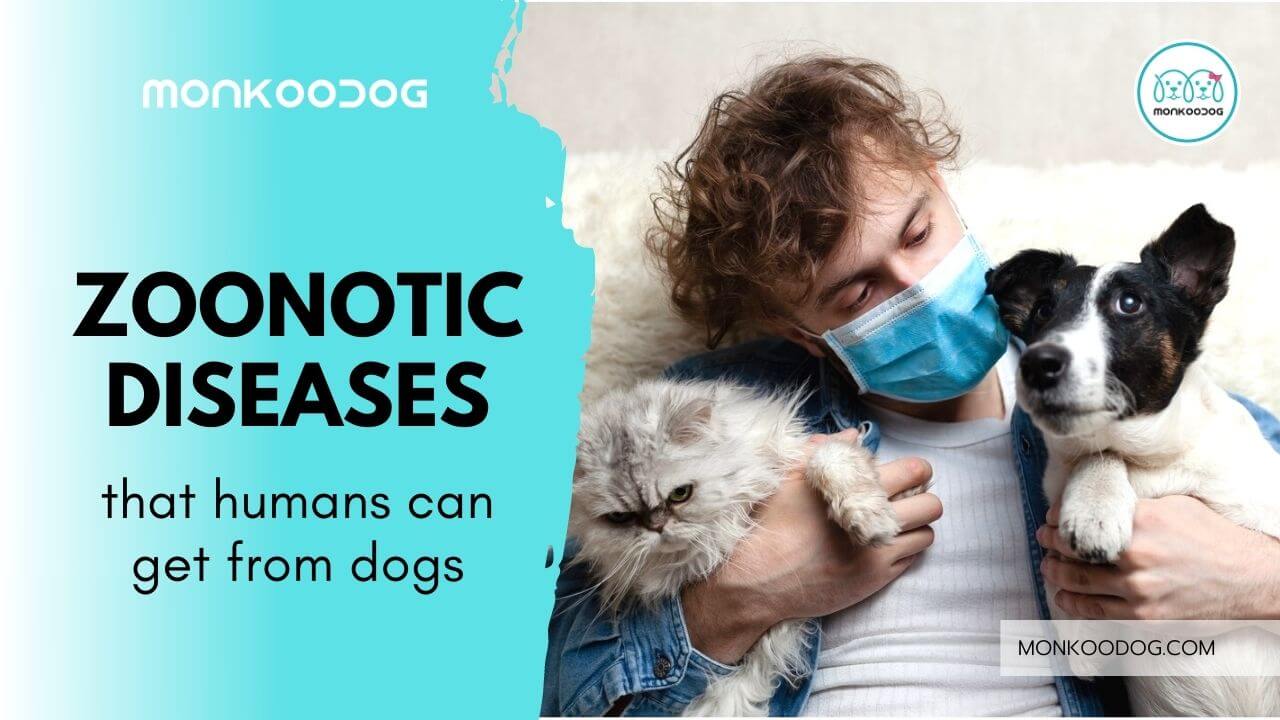 Home » 10 Zoonotic Diseases In Dogs That Any Human Can Get

10 Zoonotic Diseases In Dogs That Any Human Can Get

Furthermore, the number of zoonotic diseases that can affect both dogs and people is quite high. And amongst these numerous infections, some are comparatively more fatal. However, in general, most Zoonotic diseases can pose a serious health threat if left untreated.

Scroll down to know more about 10 common Zoonotic Diseases that you can contract from your pets.

Giardiasis or Giardia infection is a disease caused by microscopic single-celled parasites called Giardia. The disease can infect humans as well as a number of animals, including dogs.  As for your lovely canines, well, they most commonly contract the infection by coming in contact with contaminated soil, water, etc. or by licking their paws. Although humans can acquire the infection directly from their infected pooch, however, the chance of the same is relatively less.

Giardia infection, fortunately, can be cured with the right medicines. Individuals who are severely afflicted may need supportive and symptomatic therapy, such as anti-diarrhea medicines and water to stay hydrated.

Leptospirosis is a Zoonotic disease. It is caused by bacteria belonging to the scientific genera Leptospira. Dogs are susceptible to Leptospirosis. The infecting bacterias are often carried in the urine of infected animals.

In addition to direct contact with infected canines, humans can become vulnerable to Leptospirosis by coming in contact with contaminated soil, water, and mud. Leptospirosis in humans, generally inflicts flu-like symptoms. Also affecting organs particularly the kidney and liver.

Ticks are rated amongst the most common problems affecting the wellbeing of our four-legged companions. In fact, they are carriers of a number of ailments such as

A number of tick-borne diseases are known to affect both humans as well as dogs. Nevertheless, there is no direct transmission of these diseases, from dogs to humans. Instead, ticks taking on the role of carriers, essentially participate in carrying diseases between hosts and thereby giving rise to numerous Tick-borne diseases.

Symptoms of many tick-borne diseases can take some time to appear and vary according to disease; however, symptoms similar to that of flu are common at first.

One of the fatal viral infections is Rabies. In fact, it is categorized amongst the most dangerous zoonotic diseases affecting mammals, including dogs and humans. The primary mode of Rabies transmission is saliva, mostly following a bite or scratch from the infected animal. Progressing with flu-like symptoms, Rabies eventually leads to neurological dysfunction. Additionally, behavioral changes such as seizures, aggression, and disorientation are also observed in mammals infected with Rabies, including humans as well as dogs.

Therefore to prevent the spread of this deadly disease, it is absolutely important to ensure that your pooch is regularly vaccinated against Rabies.

Commonly known as scabies, sarcoptic mange is a skin disease caused by the Sarcoptes scabies mite. As a result of the mite burrowing in the skin, symptoms such as thickened skin, hair loss, and itching are observed in the affected organisms. Humans can contract Sarcoptic mange by coming in close contact with the infected Dog. With proper and routine flea and tick medications, scabies can be prevented as well treated in canines.

Commonly known as scabies, sarcoptic mange is a skin disease caused by the Sarcoptes scabies mite. As a result of the mite burrowing in the skin, symptoms such as thickened skin, hair loss, and itching are observed in the affected organisms. Humans can contract Sarcoptic mange by coming in close contact with the infected Dog. Scabies can be prevented as well treated in canines with proper and routine flea and tick medications.

Roundworms are common parasites. They have presence in the intestines of dogs, particularly puppies. The symptoms of Roundworm infection in dogs include:

Furthermore, Infections caused by roundworms can spread from dogs to people. In fact, children are most vulnerable to the Zoonotic Diseases caused by Roundworms.

Categorized under Zoonotic Diseases, Salmonellosis is a bacterial infection, fostered by the bacteria Salmonella. The symptoms of Salmonellosis in infected dogs, include:

Infected dogs act as carriers and thereby transmit the infection to humans as well as other animals. Though not particularly fatal, Salmonellosis can adversely affect humans with weak immune systems.

Cryptosporidiosis is a Zoonotic Disease that affects the gastrointestinal system of the infected organism. It is a parasitic infection.

Both people and dogs living in the same habitat suffered from Cryptosporidiosis, indicating that cryptosporidium infection might cause zoonotic transmission between the two species.

The symptoms of this potential Zoonotic Disease include:

Deceptive of its name, Ringworm is a skin and scalp disease caused by fungus instead of an actual worm.  Also referred to as dermatophytosis, Researchers have observed this fungal infection in humans as well as dogs.

This Zoonotic Disease is spread by contact with the affected canines. One can observe dry, scaly, or wet ring-shaped rash on the skin as a result of exposure to this fungal infection. Additionally, it also causes bald patches.

Listed amongst parasites causing Common Intestinal infections in canines, Hookworm leads to a number of  Zoonotic infections. The larvae of Hookworms penetrate the skin of humans as well as dogs. Hookworm infections,  in human beings, affect the skin causing reactions such as itching and swelling. Whereas in the case of dogs, Hookworms infection imposes, loss of appetite, anemia, and diarrhea.

The treatment of these infections includes antiparasitic medicines.

Remember, you can handle Zoonotic Diseases with absolute ease with proper knowledge and suitable care and precaution. Preventive measures such as routine veterinary care, in combination with the maintenance of proper hygiene for your pooch as well as yourself, can work wonders, for as the saying goes- prevention is better than cure!!

PrevPrevious10 of the Most Faithful Dog Breeds Who Will Always Be By Your Side.
NextDo Dogs Dream? If Yes, Then What Is It About?Next