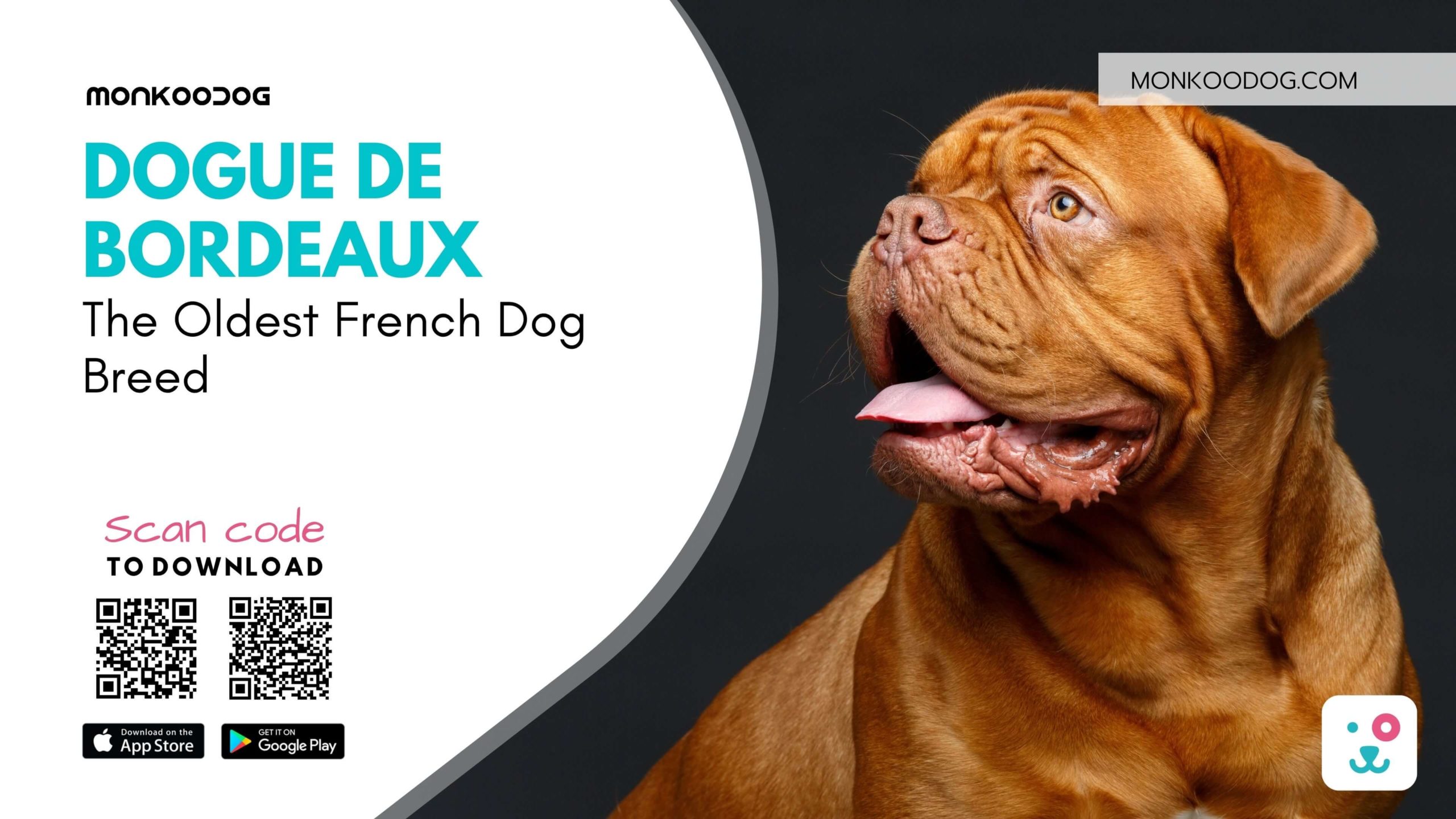 The Dogue de Bordeaux is one of France’s oldest and most unusual dog breeds. It is a big, robust, stocky, well-balanced dog with a massive head that is considered its defining trait.

Dogue is French for a mastiff. Hence they are also known as the French Mastiff. Despite its imposing appearance, the Dogue is a gentle dog.

The breed makes an outstanding guard dog due to its high level of commitment. Dogues nowadays live far more calm lives than their forebears, but they haven’t completely forgotten their role as working dogs.

They prefer to be near their owners to protect them as they have the size, attentiveness, and courage to be strong friends.

What Is the Origin of the Dogue De Bordeaux?

Although the AKC did not officially recognize them until 2007, they are considered one of France’s oldest breeds.

The breed was first shown in France in 1863, and it swiftly gained recognition not only in its home country but all around the world.

While the exact origins of the Dogue are uncertain, it is most likely connected to the bulldog and bullmastiff.

What was the Dogue de Bordeaux used for?

Traditionally, the Dogue was used to protect, herd animals, hunt, and bait bulls. Historically, the breed was found in wealthy French houses, but it has suffered several challenges and extermination attempts throughout its history.

The Dogue de Bordeaux is a big, robust dog with a stocky frame and a massive skull. They are known to have the largest heads of any canine breed.

They feature brown eyes that are round and wide-set and small ears that sit high on the head.

Dogues have thick, loose-fitting skin that generates expressive creases across their faces and jowls that hang beyond their lower jaw, giving them a solemn, dignified appearance accentuated by a little (or a lot) of drool.

Dogues de Bordeaux has smooth coats of short, delicate fur in fawn colors. They can also wear black or brown masks and spots on their chest and limbs.

You’ll most likely discover the breed’s lovely hair on your carpet, couch, and clothing due to the breed’s year-round shedding, though weekly brushing can help.

They are gentle, peaceful, and loving friends. Despite their relaxed demeanor, they may be incredibly strong-willed.

Despite their low energy levels, they form brave, watchful dogs dedicated to their owners.

Dogues, thrive in houses with children, although their size needs caution. A well-intentioned Dogue de Bordeaux, for example, may easily inadvertently knock down a tiny infant.

A youngster should be able to handle a Dogue before taking him on a stroll. A scurrying squirrel may swiftly wreak havoc due to the breed’s intense hunting instinct.

Can Dogue De Bordeaux Live with Other Dogs?

The Dogue de Bordeaux has a strong predisposition to hunt smaller animals such as cats. Other dogs in the house, particularly those of the same gender, may also be hostile to the breed.

While socialization and training can help reduce issues, they may not be able to eliminate the risk.

How Active Are Dogue De Bordeaux?

The Dogue de Bordeaux is a medium-sized dog that must be exercised regularly. Besides training, enough activity is essential, such as one long walk or two shorter walks totaling 45 minutes each day.

However, please don’t overdo it because this huge dog breed is prone to orthopedic ailments. Instead of a quick pace, walk the dog at a leisurely pace.

Allow them to only participate in low-impact activities until they are two years old. Be careful not to overwork them on hot days. Heatstroke and heat fatigue is common in brachycephalic breeds.

Training and socialization from an early age are very important for all dog breeds, especially the bigger ones.

Dogue de Bordeaux is a massive dog with the instincts of an aggressive watchdog, and despite the cooling down of their demeanor through the years, they still have to be taught to socialize to get along with other people as well as pets.

Are They Fit as Family Dogs?

The Dogue de Bordeaux has a short, soft-haired coat that is easy to care for. A yearly usage of a cleaning brush or glove should be enough for coat upkeep.

The myriad skin wrinkles on Dogue’s face, on the other hand, must be washed monthly to avoid irritation and infection. Because of its massive size, your dog should be groomed on a regular basis from the beginning.

Although the Dogue’s nails may naturally wear down over time, they should be inspected on a regular basis and clipped as needed. Your dog should only require bathing a few times each year.

The lifespan of a Dogue de Bordeaux is frequently shorter than that of a smaller dog breed. This breed is predisposed to a number of hereditary health issues.

Dogs that have been bred in compliance with these norms are less likely to inherit health problems.

It is usually easier to take preventative measures in advance than later. You might begin by focusing on their nutrition and exercise since these will benefit you much.

Also See:- What Can I Give If My Dog Won’t Eat?

This breed is prone to lymphoma in dogs. This form of cancer disrupts the synthesis of a specific type of white blood cell. The illness is treatable, and the dog’s prognosis is usually positive.

Many dogs of this breed die from heart problems such as dilated cardiomyopathy (when the pumping or contracting is compromised) and sub-aortic stenosis (when the aortic valve in a dog is excessively thin).

Dilated cardiomyopathy causes the heart muscle to deteriorate, diminishing its ability to pump blood resulting in the enlargement of heart chambers. Then there are leaky valves and signs of congestive heart failure.

Subaortic stenosis, on the other hand, is described as a narrowing of the area underneath the aortic valve that restricts blood flow and forces the heart to work harder than it should.

This condition is also known as bloat and stomach torsion. The digestive tract produces gas, and the stomach twists, resulting in a medical emergency. This happens when gas is trapped in their stomachs. This problem can not only affect the stomach but also the lungs, heart, and blood veins so immediate surgery is the only option in the end.

Hip Dysplasia is a disease common to all dog breeds and Dogue de Bordeaux is no exception. This is mostly hereditary wherein the thigh bones do not fit into the hip joints causing immense pain while walking or running or any activity.

Being overweight might give your dog some added pounds and chubbiness but it can later have severe repercussions as excessive weight is difficult to lose and gives rise to various other problems.

Can French Mastiffs live in an apartment?

While Dogues do not require much room, either inside or outside, they may not be the greatest choice for individuals who live in tiny places, such as flats.

It also varies according to your apartment but it is not ideal for massive dogs like Dogue. The most likely source of worry is that of the neighbours, who may be upset by its barking at all outsiders due to its watchdog character. He may find the continual flow of people and animals into and out of your building too much for him.

This is not a breed to keep chained in the backyard. The Bordeaux enjoys his people and is always willing to spend time with them, so expect him to share your sofa and bed.

Despite their massiveness and bold personality, they are still family dogs and would not do well alone.

They need constant attention and are prone to developing separation anxiety upon being left alone for too long.

Ensure you either train them or leave them with someone if you have to be gone for longer durations.

Training them to adjust is not going to be difficult so start by leaving them alone for as short a duration as 10 minutes and increase the duration gradually.

Also See:- Everything You Need To Know About Beagles

Dogue de Bordeaux breed, like all the other dog breeds, are adorable and deserve all the love, attention, and care as that is all they are asking for.

They might not be able to convey everything they want accurately but they have their ways of communicating, so be observant.

Make sure you are ready for a dog before you actually go out and get one. Many people realise later on that having a dog is a huge responsibility.

Dogue de Bordeaux is a breed not recommended for novices in pet keeping as they might be slightly difficult to keep under control.

Their high energy level, watchdog instincts, and possessive nature are something that is not easy to deal with.

If you do not have experience with other dogs, you might face difficulties with this one that will tire and exhaust both of you, so it is better if you start with a dog you are prepared for as a novice in the field.