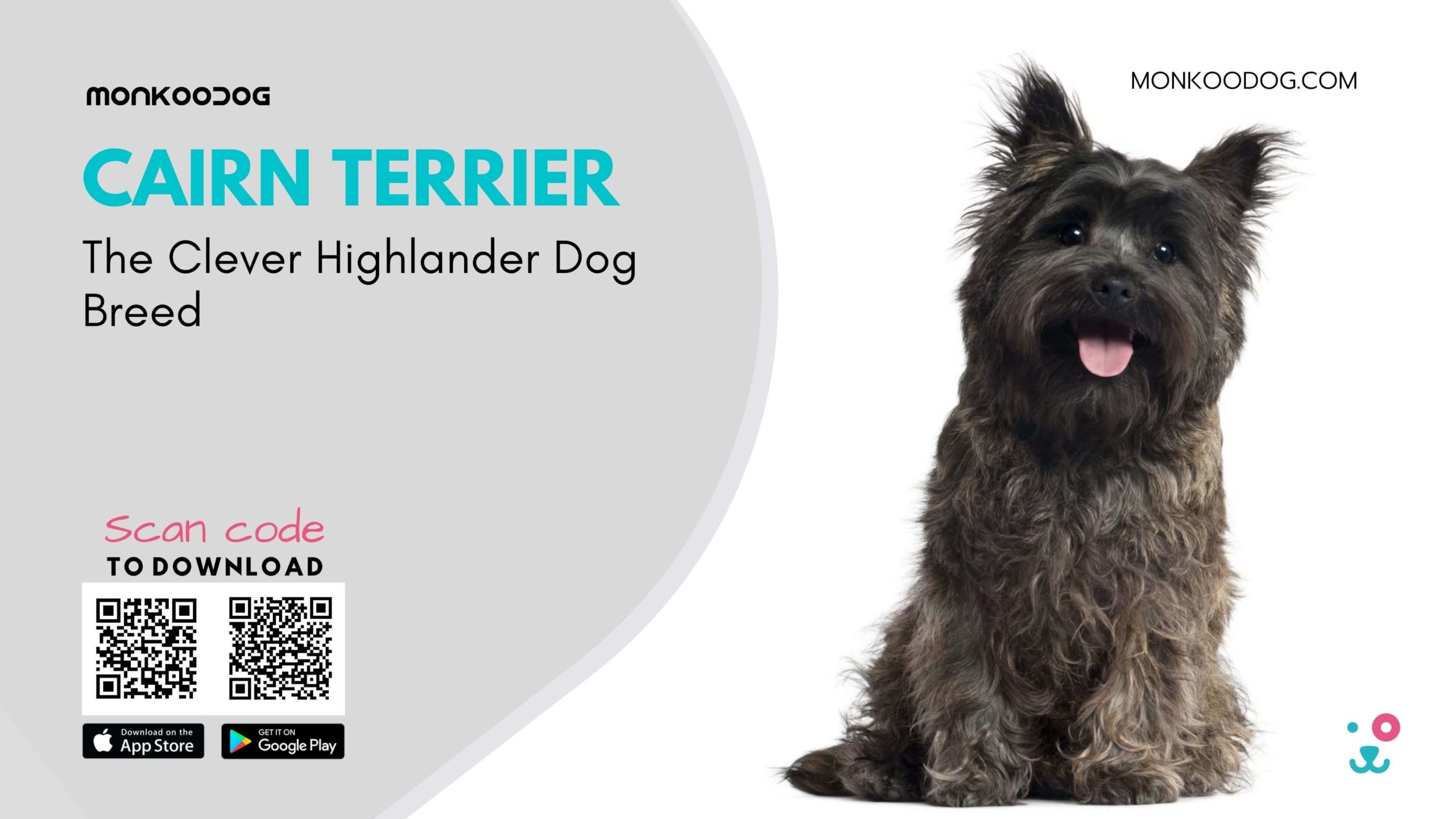 The Cairn Terrier originated in Scotland from a terrier group of dog breeds. They have a small mouth and short legs and they make an excellent family dog.

The history related to this breed is a little hazy. The Cairn Terrier is a working dog breed that originated in the Highlands of Scotland. This dog breed is one of the oldest breeds in the country. These were named Cairn (which means mound of rough stones) because of their rough looks, hunting, and chasing ability.

Known by the name “Short-Haired Skye Terrier” from the early 1800s, the Cairn dog breed was known to be bred by Captain Martin MacLeod of Drynock, Isle of Skye, Scotland. He maintained this breed for around forty years before emigrating to Canada.

For the following seventy years, the breed was maintained by Mr. John Macdonald and his brother, Isle of Skye.
In the early 1900s, cairn terriers were presented in official dog shows in the United Kingdom under Skye Terrier.

In 1912, the Kennel Club of the United Kingdom established a separate registration for the Cairn Terrier, and the breed was awarded Championship status in that year.

Cairn Terriers have also been owned by some well-known people such as Wallis Simpson, the Duchess of Windsor.

The male terrier is oversized in its weight and height. The average height is 10 inches and the weight is 14 pounds. whereas an average female terrier stands 9.5 inches tall and weighs around 13 pounds.

Due to its wiry coats and soft undercoat, the Cairn Terrier has an attractive scruffy look.

The cairn terrier is a small dog with a sturdy frame, short legs, and a broadhead. This tiny canine has a double coat, with the outer jacket being rough and worn and the inner being fluffy. They have the perfect body size for long cuddling sessions while being tough enough for long wild outdoor activities.

Cairn has a curious fox-like face with dark brown eyes and a button nose which is amusing given that the breed was bred to dig out vermin from Scottish rock heaps. One of their most distinguishing features is that they are adamant little explorers up for everything.

The Cairn is the epitome of a Terrier:

Cairns are attentive to their family’s wants and make an effort to satisfy them. These canines can make terrific companions if they get daily physical and mental activity in a secure environment.

Cairn Terriers adore playing with kids, but they may be aggressive with other dogs and pursue chasing small animals. They like sniffing, exploring, hunting, and digging.

When a Cairn is young, they require early socialization, including exposure to people, sights, noises, and various activities. Outdoor exposure ensures your Cairn’s well-behaved behavior and all-around development.

They are very attentive with a loud bark that will warn you of a stranger approaching the house, even if they are not guarding dogs. These dogs are also intelligent, earning them the reputation of being easy to train.

Also See:- Everything To Know About Basset Hound Beagle Mix

Is Cairn Terrier a Healthy Breed?

Cairn Terriers are generally considered a healthy breed with a reputation for toughness, but they may suffer from some of the health issues related to terriers in general. They may live up to 15 years to even 18 years.

It is a genetic disorder in which red blood cells lack the pyruvate kinase enzyme, causing them to break down prematurely. Lethargy, low exercise tolerance, and pallor are all disease symptoms.

in this breed can be a severe health issue. It’s a dangerous condition that can lead to joint pain, metabolic and digestive difficulties, discomfort in the back, and heart disease.

Cataracts are opacifications of the eye’s lens or lens capsule that cause visual impairment. Cataracts can be caused by aging, trauma, inflammation, or genetic factors.

Perthes’ disease is aseptic femoral head necrosis. Lameness is the most common symptom in toy and tiny breed puppies under one year. Cairns may be at a little higher risk of LCP than others.

A condition in which the kneecaps are slipped from their original position. It may be treated with a brace, depending on the severity. If the condition goes far from brace support, surgery may be necessary.

A healthy routine for your Cairn Terriers can make them live longer with health and happiness. The value of a healthy diet and exercise program cannot be overstated.

Pets are like little kids. They need our care in the same way a kid would.

As Cairns are brilliant dogs and full of energy, they can get easily bored if not given much stimulation and exercise. The absence of exercise and stimulation may lead to behavioral changes, which can sometimes be very nasty. Short walks and jogging are good ideas.

Training and various pet games may also keep them busy.

The breed requires a complete and balanced diet and does best on high-quality commercial dog food for maximum health. Make sure the food you purchase complies with the nutritional criteria set out by AAFCO and that you consider your dog’s age when selecting a formula.

Consult your veterinarian for the appropriate feeding charts. Depending on their dietary requirements, they will be able to advise you on how much and how often to feed your Cairn.

Being observant of your dog may always be beneficial in detecting early signs of any health problem in your dog. Any unusual symptom might indicate a dangerous illness or be a minor or transient issue.

The main point is to know when and how quickly to seek veterinarian assistance. Many disorders lead dogs to exhibit a distinct set of symptoms, which, when combined, might indicate that your Cairn Terrier requires medical attention.

How Often Should I Groom My Cairn Terrier?

Your Cairn’s coat is a waterproof double-coat that protects him as he runs through the bush and thorns, terrifying the surrounding small fauna. Bathing him can often remove the protective oils from his coat and weaken its natural roughness.

Your Cairn isn’t one to mess with his hairstyle; he’s more of a wash-and-wear sort of dog. His hair grows rapidly, so he’ll need to brush it at least once a week to keep dead, loose hair tufts from tangling and becoming ugly mats.

Brush his coat using a slicker brush or a pin brush to maintain it tangle-free. Start brushing him early in childhood so he learns to appreciate it and accept it and be still through the process.

Your Cairn Terrier’s hair will get rough around the edges as his coat develops. You shouldn’t have to worry about mats if you brush him regularly, but he’ll need a trim now and again to be friendly and tidy. You can shape his coat in one of two ways: stripping or trimming.

Two or three times a year, the hair of coats is hand-plucked or shaved off using grooming knives. This promotes new hair development and keeps the hair wiry, as per the breed standard. Pet coats can also be stripped; however, many owners choose to keep their pet’s hair short. While the hair may soften as it comes back, trimming will significantly reduce maintenance requirements.

Because Cairn Terriers have a stubborn nature and are a little obstinate, constant training is essential. These independent types were trained to be solitary hunters, so they aren’t used to relying on others for guidance and prefer to make their judgments.

One of their features you’ll find nearly tough to teach away is their instinct to pursue squirrels, rabbits, other dogs, and anything else. But don’t blame them; they earned it the right way by hunting. So, unless you’re in a fenced yard, never let your dog off the leash.

They are fortunate in that they are intelligent and quick learners. A 10-week-old puppy can learn simple instructions with positive reinforcement training, treats, toys, and lots of praise for a job well done.

Cairn will fare better with multiple brief training sessions of five to ten minutes each day as they become older, rather than one extended session. The essential thing is to maintain consistency and let them know you’re the boss. Otherwise, your cute Cairn Terrier can turn into a terrifying Cairn “Terror.”

Is a Cairn Terrier Good for Family Life?

Cairns are versatile miniature terriers who thrive in various environments, from a cramped city flat to a sprawling rural estate, as long as they receive enough exercise. When properly socialized and trained, Cairn Terriers are fantastic dogs for an active household with older children.

Keep in mind that they expect to be part of all family events. Fear of missing out is natural for these sensitive puppies. They like playing with other dogs in the house (though they may be pushy), and they can get along with cats if introduced at a young age. Cairns is a fantastic choice for first-time pet owners because of its adaptability.

Also See:- Jack Russell Terrier: All You Need To Know