Origin of Name:   The Appenzeller Sennenhund is a medium-size breed of dog. 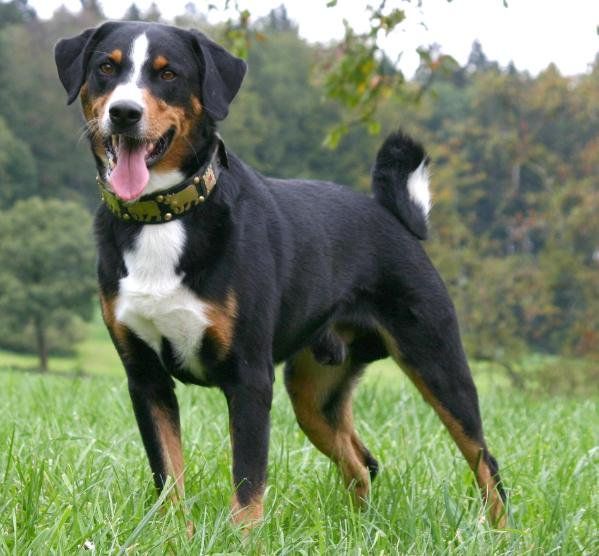 Appenzeller Sennenhund is also known as Appenzeller Mountain Dog or Appenzell Cattle Dog. He is lively, high spirited, confident, reliable and fearless. There is little doubt on strangers, he is a good watchdog who cannot be bribed. The intelligence of the breed makes them highly capable learners. Due to his personality and exercise needs, he is ill to stay in the apartment.

As early as 1853, the Appenzell Cattle Dog was first described as a high-pitched barking, short-haired, multi-colored cattle dog, and used to protect homestead and herd cattle in the original area of ​​the appellee Was done, Switzerland. Inspired by the breeder, Max Siber, Appenzeller was named a breed of his own in 1898 by the Swiss Synological Society.

A committed fan of Swiss cattle dogs, Professor Drs. Started by Albert Heim, the Appenzeller Senhend Club was established in 1906 to promote and preserve the breed. Dr. Heim established the first valid breed standard in 1914, and with it made mandatory registration of puppies in the Appenzeller Dog Stud Book.

Today, the breed can be seen throughout Switzerland and other parts of Europe. Although considered rare, the number of Appenzellers is gradually increasing in North America as well. The breeding stock is still very small, and it is only by careful and responsible breeding that it will be possible to establish and consolidate its natural and excellent hereditary qualities.

Appenzeller Sennenhund is tri- colored, medium sized and almost square built and balanced. He is muscular and agile and makes a good driving, watch, guard, house or farm dog. Due to their versatility and desire, they excel in agility, obedience, herring and search and rescue.

This breed makes for great watchdogs and don't drool at all. They do not require a lot of gooming and are easy to train

They are prone to allergies. Are not the perfect choice for apartments.

Appenzeller Sennenhund should perform well on high quality dog ​​food, whether it is commercially manufactured or prepared with the supervision and approval of your vet. Any diet should be appropriate for the age of the dog (puppy, adult or senior). Some dogs are at risk of being overweight, so watch your dog's calorie consumption and weight level. Treatment training can be an important aid, but giving too much can lead to obesity. Know which human foods are safe for dogs, and which are not. If you have any concerns about your dog's weight or diet, check with your vet. Clean, fresh water must be available at all times.

Appenzeller is a herring / working breed with boundless energy. They are highly intelligent and are required to do the job. Early socialization is necessary, and training at an early age is important. They are a strong powerful breed with incredible speed and need a lot of space to run. It is not a breed that thrives in a busy urban environment or suburbs unless it has a lot of activity, nor is it a breed for kenneling. He prefers to hang out, where his strong herring and safety instincts and his bond with his territory and his "people" keep him from escaping.

Appenzeller is a healthy breed with few health issues. Life expectancy is 12 to 15 years, but it is not unheard of for them to live well beyond this.