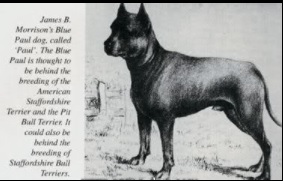 The Blue Paul Terrier was a dog fighting breed apparently kept in Scotland and the United States. Little is known about this dog, other than the fact that it is believed to be quite deadly in the Dog Fighting Ring and it introduced a blue color in the Staffordshire Bull Terriers and their descendants American Blue Bull Terrier Was. American Staffordshire Terrier. It does not appear as to when or where the dog evolved, when or how it went extinct, or even that there was no compromise on its appearance and nature. The Blue Paul Terrier was also known as the Scottish Bull Terrier, Blue Pole Bulldog and Blue Pole.

Almost certainly nothing is known about the Blue Paul Terrier. The dog’s origins and eventual fate are shrouded in mystery. Legend has it that around 1770, John Paul Jones, a Scottish-born American sailor, returned to his home in Kirkcobright, based in the Dumfries and Galloway region of Scotland. This John Paul Jones was reportedly America’s first famous naval hero, most famous for his taunts, “I haven’t started a fight yet.” He brought with him many blue-colored terriers. These dogs were apparently highly aggressive dogs and were quickly adopted by local dog fighters. It is not known where he acquired these Blue Terriers, but the locals started calling him the Blue Paul Terriers in his honor. The breed reportedly was most popular with “Gypsies” who traveled through the region. However, sources do not make it clear that these “Gypsies” (a derogatory and obsolete term that describes at least three different groups in Britain) were Roma, Scottish travelers or Irish travelers. Depending on time and place it is most likely that they were Scottish travelers, but this cannot be said with any certainty. The Blue Paul Terrier earned a well-known reputation in the ring, where he is said to be ready to fight to the death. John Paul Jones reportedly returned to the US around 1777, bringing the Blue Paul Terriers with him, where they were later installed on the Eastern Seaboard.

There are many problems with this story. The biggest thing is that no documentation appears to make it a little more than rumor and folklore. Additionally, the time is just a little far. The American Revolution, which began in 1775 (depending on what event is considered the beginning), was in full swing until 1777. Although mainly fought on land in the colonies, there was also a considerable amount of maritime conflict. The British blocked most of the major colonial ports, interfering with American shipping at one point or another during the conflict. This is highly doubtful, although it is unlikely that John Paul Jones returned to the US at this point, and it is also less likely that he was successful in bringing the dogs with him. In any case, John Paul Jones was apparently already in the US by 1774, and earned a commission from the Continental Congress in 1775.

It is also not entirely clear how John Paul Jones first acquired these dogs or where they came from. The “Gypsies” who held them said they were originally from the Galloway coast, where Kirkudbright is located. If they were developed there, it is unlikely that John Paul Jones introduced them. It is possible that “Gypsies” did not actually mean Galloway, but rather Galway, an important city located on the west coast of Ireland. If so, the Blue Paul Terrier may be a descendant of the Carey Blue Terrier, but this is little more than speculation. It is commonly said that the Blue Paul Terrier was a variant of the Bull and the Terrier, a cross between an Old English Bulldog and a Terrier. This is possible, but somewhat unlikely. Even though bulls and terriers existed for centuries, they were not common until after 1835, when the popularity of dog fighting increased after the Parliament banned bull-baiting and beer-baiting. If the Blue Paul Terrier dated back to the 1770s, it would have predated most other bulls and terriers for more than 60 years. The surviving portraits of the Blue Paul Terriers are not conclusive. They resemble other paintings of the Bull Terrier, but these were well made in the history of the Blue Paul Terrier, and may actually represent the cross between that breed and the Bull and the Terriers rather than the original breed. In any case, those pictures are not conclusive and show a dog that looks exactly like a Manchester terrier and other terrier breeds as it does a bull and terrier. References are made to the breed with a blue coat similar to some greyhounds, and it is possible that the breed was actually a cross between a blue greyhound and a terrier, although this is not more evidence than any other theory. Other theories have been presented that dogs can be descended from crosses between terriers and blue Gaskney hounds, collie-type dogs, or perhaps a Native American dog, but these theories are also unlikely.

Very little is known about the Blue Paul Terrier with particularity. It was believed to be extremely aggressive and ready to fight to the death. The breed usually had a gray coat, but it is not clear if the coat is always solid color or if it sometimes bears white markings. Not all Blue Paul Terriers were blue, and members of the Red and Brindle breed were also occasionally born. These dogs were known as Smuts or Red Smuts in Scotland. The breed was quite muscular and athletic.

The Blue Paul Terrier resembled contemporary Staffordshire Terriers. They had a smooth coat and were powerfully built. They weighed about 50 lbs. and measured up to 22 at the withers. The head was large; the forehead was flat, muzzle short and square, large and broad but not receding like that of the. The jaws and teeth were even with no underbite. They had a slight dip between the eyes, which were dark hazel and not sunken. The ears were small, thin, set high, and invariably cropped, with a tight face. The eyebrows contracted or knit. The facial expression of the Blue Paul has never been seen in any other breed and can frequently be recognized in mixed breeds. The body was round and well ribbed up, it’s back short, broad, and muscular, and its chest deep and wide. The tail was set low and devoid of fringe, rather drooping and never rising above the back. The dog stood straight and firmly on its legs. Its forelegs were stout and muscular, showing no curve. The hind legs were very thick and strong, with well-developed muscles. The color was dark blue as can be seen in Greyhounds. However, they sometimes produced brindles or reds, which were known as red smuts in Scotland.