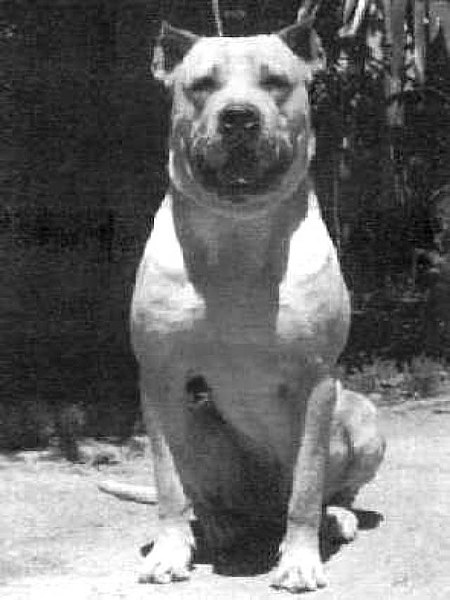 The history of the Cordoba Fighting Dog began during Argentina’s colonial period. When the Spanish were subjugating many Native American people found throughout Latin America, where they made extensive use of war dogs. The Spanish used a number of different breeds, but perhaps the most commonly used was the Allanos; Early ancestor of the modern Alan Español. At that time, an alno was not a breed in the modern sense, but a type of dog. The history of the Alano is not clear, but it is said that they may have descended from the Molosus of Rome, the Alcount of the Caucasian Allen tribe, or perhaps the Mastiff of Britain. It is also believed that the early Allanos arrived with Christopher Columbus, similarly he used them in his efforts to subdue the Native Indians. The Alanos were athletic and ferocious Mastiff-type dogs, used for hunting and catching bulls in Spain, in addition to being used for warfare. Alanos were large, strong, very fierce dogs that were deadly in battle when standing against a man or beast. These dogs would eventually spread throughout Latin America, and perhaps to Argentina as well, where they would have found use for working in its very important and lucrative cattle industry.

During the 18th and 19th centuries, the population of the United Kingdom increased dramatically as innovations in agriculture and medicine began to take root. Eventually, Great Britain had a population so large that the islands could not sustain it, grain imports became extremely important to the British Empire, and trade links with grain-producing countries around the world were forged. Known as the home of thousands of square miles of pumps, Argentina became one of the UK’s major agricultural suppliers. At the same time, dog fighting was becoming extremely popular in England. In 1835, bull-baiting and bear-bait, the game that first pitted dogs in a fight to the death against other animals, were outlawed by Parliament. British fanatics and gamblers then turned their interest to dog fighting, becoming one of the most popular sports in the urban areas of the British Isles. After a few decades of experimentation, the British dog-fighters decided that the cross between the English bulldog and various types of terriers made the best fighting dogs. Known as the Bull and Terriers, these crosses have the size, power, jaw, determination, and speed of the Bulldogs and the speed, agility, dog aggression, sharp temperament and willpower to fight the Terriers’ death. . Eventually, several different breeds evolved from the Bull and Terrier, although the Bull Terrier and the Staffordshire Bull Terrier proved to be the most common and long-lasting.

Many British ships carried the Bull Terriers and the Staffordshire Bull Terrier. These dogs provided companionship to the crew and sometimes entertained in the form of dog fights. These dogs were introduced around the world, and made dog fighting games very popular. Many breeds around the world can trace their origins to these dogs, including the American Pit Bull Terrier and the American Staffordshire Terrier of the United States, and Gal Terror and Bully Kutta of the Indian subcontinent. In the mid-1800s, bullion terriers began arriving in Argentine ports, where they exerted considerable influence. Argentine fanatics started acquiring these dogs and had to fight on their own. Dog fighting became most popular in Córdoba, the second largest city in Argentina and the capital of the province with the same name.

Dog fighting dogs made it very useful for pig hunting. Allowed by the Spanish to run loose to provide a source of food, Argentine wild hogs eventually became an agricultural pest, as well as being extremely dangerous. The Cordoban Fighting Dogs were one of the only breeds that had the courage to take the wild boar and have the strength to overcome it until its owners could come to kill it. However, the Cordoban Fighting Dog was so aggressive that it could not be used in packs because the dogs immediately started battling with each other. Some Cordoban fighting dogs were able to hunt with another dog of the opposite sex, but this was not always the case.

In 1925, the son of a wealthy Cordoban zamindar, Antonio Nores Martinez and his younger brother Agustin decided to develop a large game hunting breed from the Cordoban Fighting Dog. In the younger Martinez brothers’ book El Dogo Argentino (The Dogo Argentino) – 1973, Agustin writes that his brother’s vision was to create, “”a new breed of dog for big game, for which he is going to take advantage of extraordinary bravery.”” Had been. The Fighting Dog of Cordoba. Mixing them with other breeds, which give them a good sense of height, odor, speed, hunting instinct and more than anything, deprives them of fighting ferociously against other dogs, rendering them useless for pack hunting. Gone. “”The Norse Martinez brothers began crossing the female Cordoban Fighting Dog (which was a less aggressive sex) with several exotic breeds such as the pointer, the Great Pyrenees, and the Dog de Bordeaux. The resulting breed is known as the Dogo Argentina, And quickly earned a reputation in southern South America for being the best breed to hunt pigs and cougars.

Dogo Argentina was so successful as a big game hunter, that it would eventually completely replace the Cordoba Fighting Dog for that purpose. However, the breed was used in dog fights for several decades. Countless breed members died in the fight against other dogs, greatly reducing the breed’s population and gene pool. As breeders consistently favored more aggressive dogs, they became more difficult to breed, meaning fewer and fewer were bred to replace those who were being killed. A series of political and economic crises during the 20th century probably made it impossible for many Argentines to afford the luxury of dog keeping. Changing social fairs also made dog fighting an unbelievable and cruel sport, which is unacceptable. As a result of all these factors, the Cordoba Fighting Dog eventually became extinct, although it is not clear when. The breed was still well known around Cordoba in the 1920s and 1930s, but disappeared after some time.