Origin of Name:   The Czechoslovakian Vlcak is a primitive dog breed that was developed in the 1950s using German Shepherd. 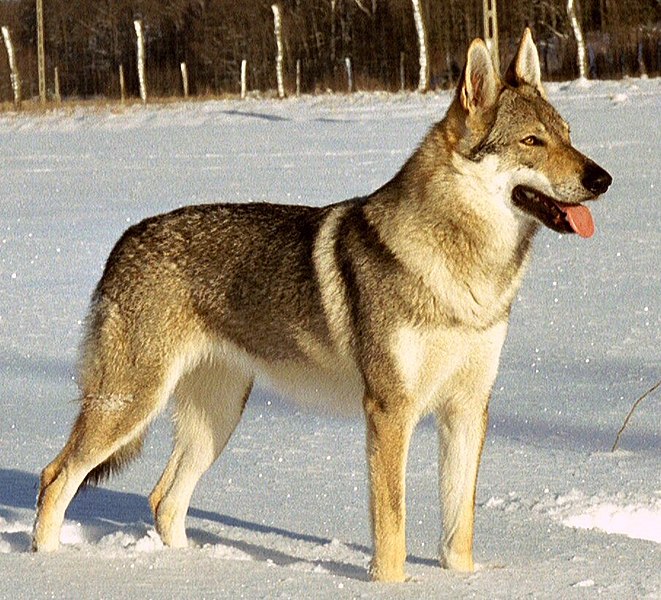 More is known about the lineage of the Czechoslovakian Wolfdog than most breeds because the dog was developed in the mid-20th century, and its early development was part of a carefully recorded scientific experiment. In 1955, the Czechoslovak government became interested in the possibility of breeding dogs and wolves. At the time, it was not definitively established that the dog was descended from the wolf, leading many scientists to believe that the dog was actually the dhole, coyote, or any other dog like one of three species of jackal was domesticated from. Czechoslovakian scientists theorized that if the wolf and the dog were the same species, the dog was almost certainly a descendant of the wolf. To be considered a single species, two populations must be able to interbreed independently and produce fertile offspring. There are many examples of two different species that can produce offspring, although these offspring are almost never fertile such as a mule (horse and donkey) or a lion (lion and tiger).

To test whether the dog and the wolf were the same species, a carefully planned breeding experiment was performed. Four Carpathian wolves (the most common wolf subspecies in Czechoslovakia) were initially captured and trained. The names of these wolves were Argo, Britta, Lejdi and Sarik. 40 to 50 German Shepherd Dogs were also selected from several major working lines, including the famous Z Pohranicni Straze Line. These wolves and dogs were extensively crossed. It was shown conclusively that the offspring of both a male dog/female wolf and a male wolf/female dog cross were fertile the vast majority of the time. The offspring of these crosses were kept together for the next ten years, and fertility continued. These wolf/dog hybrids exhibited a distinctive disposition and behavior. They were significantly more wolf-like than dog-like in appearance, although this probably had more to do with the fact that the German Shepherd, considered the most wolf-like of all dogs in terms of appearance, was the breed in use. selected for. Additionally, these dogs rarely barked and did not respond to human training as quickly or easily as most modern dog breeds. The breed is known as Vlcak in Czech and Vlciak in Slovak, both of which translate to Wolfdog or German Shepherd.

In 1965, the breeding experiment ended, but the Czechoslovakian government was not carried out with wolf/dog hybrids. The Czechoslovak army and police forces made extensive use of dogs, especially German Shepherds. These dogs, which were often very high birth weight, often suffered from serious health problems such as hip dysplasia, which shortened their life expectancy and rendered them useless as Working Dogs. It was believed that adding wolves' blood would improve the health and stamina of Working Dogs, and possibly enhance their senses and intelligence. By the late 1950s, the Czechoslovakian military was already experimenting with using the Czechoslovakian Wolfdog as a border patrol dog. Czechoslovakian trainers later tried to use the breed for many other tasks, such as search and rescue, police work, cart pulling, scent-tracing, hunting, personal and property protection, and drug sniffing.

The initial results of using the Czechoslovakian Wolfdog were so promising that a breeding program was established involving government and private breeders. Both Czech and Slovak breeders from across the country contributed to the large-scale breeding programme. The goal was to combine the wolf's beneficial qualities such as health and keen senses with the training and friendliness of the domestic dog. The results of this program were somewhat mixed. The Czechoslovakian Wolfdog was often significantly healthier than many modern dog breeds, although it still exhibited (albeit at lower rates) most of their common genetically inherited conditions. The Czechoslovakian wolfdog also proved to be more trainable and responsive than the wolf, but was significantly more difficult to train than most domestic dogs. Czechoslovakian handlers found that the breed was capable of learning and performing most of the tasks required of it, but that the breed was significantly less obedient and responsive than other working breeds. In 1982, the Czechoslovak Kennel Club gave full recognition to the Czechoslovakian Wolfdog and named it a national breed.

The head and face of the Czechoslovakian Wolfdog are probably the most wolf-like features of the breed. The head is symmetrical, well-muscled, and shaped like a blunt wedge. The facial musculature of this breed should be well developed and clearly visible without prominence. The gender of this breed should be very clear from looking at the head, which is either strongly masculine or feminine. The skull and muzzle are indistinguishable from each other and are almost seamlessly mixed. The muzzle is very long and should always be at least 50% longer than the skull. Although long, the muzzle is not particularly wide. The muzzle should be clean, straight and with tight fitting lips. This breed should have either scissors or a level bite. The nose of the Czechoslovakian Wolfdog is oval in shape and is always black in colour. The eyes should be small, oblong and amber or light brown in colour. The Czechoslovakian Wolfdog's ears are small, triangular, and are fully erect. These ears are incredibly mobile and expressive, and clearly show a dog's emotions and mood. The overall expression of most breed members is wild and intense.

The coat of the Czechoslovakian Wolfdog varies greatly by season. In winter, the coat consists of an extremely thick and dense undercoat that often prevails over the outer coat. In summer, the breed's coat is much shorter and less dense. Whatever the weather, the coat should be straight and close. The coat of the Czechoslovakian Wolfdog should cover the entire body of the breed, even in places where most modern breeds do not have hair such as the inner parts of the thighs, scrotum and ears. The Czechoslovakian Wolfdog is found in coat colors that predominate among Carpathian wolves. This breed usually ranges from yellow-brown to silver-grey. Dogs of these colors should show a lighter mask and lighter shading under the neck and chest. Although more rarely seen, the dark brown Czechoslovakian wolfdog is also perfectly acceptable. Such dogs should have a mask that is lighter in color than the rest of the body. Occasionally, a Czechoslovakian Wolfdog will be born in an alternate color such as being solid black or lacking a mask. Such dogs are ineligible in the show ring and probably should not be bred, but otherwise make acceptable pets and Working Dogs as members of other breeds.

This breed is easy to train, is kid and dog friendly

Obedience training is necessary for this breed. Young puppies should begin with early socialization and puppy training classes. These help ensure that they will grow into a well-adjusted, well-run companion. This breed is required to live with his family and is likely to result in undesirable behaviour if he is regularly left alone for long periods of time.

One of the primary goals in the development of this breed was to create a dog that was largely free of the health problems that plague many modern breeds. This breed tends to be significantly healthier than many modern dogs, and exhibits significantly lower rates of several common genetically inherited conditions. However, the Czechoslovakian Wolfdog is still subject to many of the health problems seen in other dog breeds, especially hip dysplasia. Czechoslovakian wolfdogs tend to live significantly longer lives than most breeds of their size, and most members of the breed live to be between 12 and 18 years old.

Because this breed is known to have skeletal and visual problems, it is highly recommended for owners to have their pets tested by both the Orthopedic Foundation for Animals (OFA) and the Canine Eye Registration Foundation (CERF). The OFA and CERF perform genetic and other tests to identify potential health defects before they show up. This is especially valuable in detecting conditions that do not appear until the dog has reached an advanced age, making it especially important for anyone considering breeding their own dog so that he can get tested to prevent the spread of potential genetic conditions to his offspring. The Czechoslovakian Wolfdog often has a problem living off modern dog food and does best when provided with a high quality diet, preferably one that contains meat.

A complete list of health problems identified in the Czechoslovakian Wolfdog, even if only from isolated cases, should include: