Origin of Name:   Danish–Swedish farmdog is a breed of dog that has its origin in Denmark and southern Sweden. 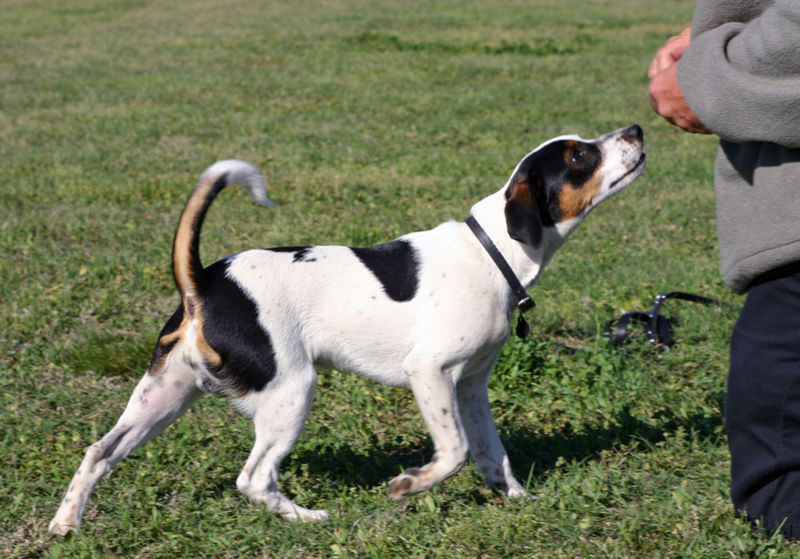 Until a few decades ago, the small farmer's dog, originally known as the Danish Per, was a natural part of Danish rural life. The Danish-Swedish farmdog's day-to-day tasks were numerous, including mausers / rappers, cattle shepherds, Hunting Dogs, watchmen, and family companions. As lifestyle changes have taken place, small family farms have become scarce and so have loyal farmdogs. The Danish and Swedish Kennel Club's efforts to bring the breed back to life culminated in 1987 with the first breed standard for Danish-Swedish farmdogs. In 1998, a DSF was imported into the US to establish the first official breeding program. The FCI standard for the breed was officially published on March 26, 2009. The Danish-Swedish farmdog was recorded in 2011 at the American Kennel Club Foundation Stock Services, a first step towards its goal of being fully accredited by the AKC.

The Danish Swedish Farmdog is a small, compact dog with a slightly rectangular body shape. The ratio of height (measured from ground to withers) to length is approximately 9:10. Their chest depth is about 1:2 in comparison to their height. Since they are a working breed, no weight standard is provided. The height of males of this breed should fall between 13 1/2 and 14 1/2 inches; For women between 12 1/2 and 13 3/4 inches. These heights are approximate and can vary from 3/4 of an inch, more or less.

They have smooth, hard coats with short hairs that lie flat and close to their bodies. White is the predominant coat colour, with patches in variations of black, tan, brown and fawn. These patches can be of different sizes and color combinations. Their coat may have tan markings or flaking in other colors.

Their triangular-shaped heads are slightly smaller in proportion to their bodies; The skull is broad and slightly rounded with a well-defined stop. The muzzle is slightly shorter than the skull; The nosebridge is straight from the side. The well-developed muzzle gradually narrows towards the nose, without protruding. The color of the nose is always the same as the color of the patches on a dog's coat. cheeks are pronounced; The jaws are strong and close in a scissor bite, even with well-developed incisors. A pinscher bite is acceptable. This breed has medium sized eyes that are somewhat rounded, with a lively and kind expression. Dogs with dark spots have dark eyes; Dogs with yellow or brown patches of liver may have a slightly lighter eye color. They have medium sized ears with roses or buttons. If they are button ears, the tips are closer to the cheeks. In either type of ear, the fold is just above the skull.

Their medium-long neck is strong and is slightly arched without a neck. The forearm is well defined and the shoulders are oblique. The long, deep chest has well-proportioned ribs. The short, wide waist is somewhat arched; The group is slightly rounded. Slightly raised in stomach. The tail, which is not set too high, can be long or naturally short, as in a stumpy tail. The dog should carry it straight, but with a slight curve, like a sickle.

The upper arms are oblique; Forelegs are straight and parallel. Their strong pasterns are springy. Hind legs are parallel and muscular, with well angular knees and hock joints. The upper thighs of their back are broad. The Danish Swedish Farmdog's short legs are oval and not tightly woven. His gait is parallel and free.

The Danish-Swedish farmdog is an easy dog ​​for the groom to take care of and maintain. Due to very little maintenance, occasional brushing and bathing is required to keep them clean and looking their best. If necessary, their nails can be trimmed with a nail clipper or grinder to avoid overgrowth, splitting, and breakage. Their ears should be examined to avoid the formation of wax and debris, which may cause infection. Teeth can be brushed.

Over the years, DSF has proven to be a healthy breed, free of health issues in general, genetic or otherwise. Working with a responsible breeder who owns a Danish-Swedish farmdog can get the education they want to learn about specific health concerns within the breed. Good breeders use genetic testing of their breeding stock to reduce the likelihood of disease in their puppies.