Origin of Name:   The Drentsche Patrijshond is a purebred dog hailing from the Netherlands. 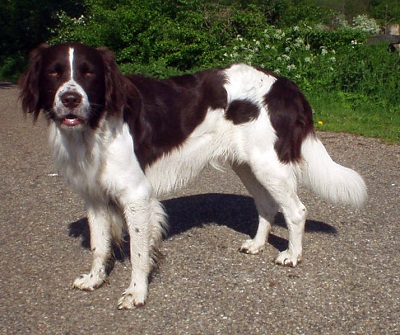 Drent is the "likeness" for hunting for a variety of game on diverse terrain. They are known to keep in contact with hunters; When at the point, while waiting for the hunter, the dog will often be looked back at its hunting companion if it takes a long time to wait. Their adaptability makes them suitable for all modes of play on the field as well as in the water. Drent is also known as a good retriever. Due to the gentle nature of Drent, methods of coercive training are inappropriate. The dog is expected to bark to announce visitors to the house, and is often reserved for strangers until welcomed. He is a pet of exceptional value on top of being loyal, intelligent and a good hunting buddy.

The breed evolved from indicating dogs originating in Spain (Spionane) and migrated to the Netherlands via France in the 16th century. In the Netherlands, these dogs were referred to as Pertridge dogs. In the eastern parts of the country, mainly in the province of Drenthe, these Pteridge dogs were tied together and not mixed with foreign breeds, as happened elsewhere. Throughout its history, the breed stood on three equally important pillars: versatile Hunting Dogs, farm yard dogs, and playmates for children. It is fundamental to the Drent breed that it hunts all upland games and water fouls, announces visitors to a home or farm (without showing aggression or fear), and being an excellent companion for children with an excellent family Is a partner. These three columns still serve as the guiding parameters for defining a parameter today. The breed was recognized by the Dutch Kennel Club on 15 May 1943.

The Drentse Patrijshond is generally similar to other Spaniel-type dogs, particularly the Small Munsterlander and the English Springer Spaniel, but remains quite unique in appearance. Drentse Patrijshond is a medium to large breed. Most men stand on shoulders between 23 and 25 while most women are between 21½ and 23½ . Although weight is strongly influenced by height, construction, position, and gender, most breed members weigh between 40 and 65 pounds. Drentse Patrijshond's body is obscured by the breed's coat, but underneath is a very fit, athletic and muscular dog. This breed must demonstrate both great power and great speed. The tail of Drentse Patrijshond is relatively long. The tail is straightened, but there may be a slight upward curve at the end.

Drentse Patrijshond's coat is very dense. The coat is medium to medium long, roughly the same length as the English Springer Spaniels seen on the working (not show) line. The hairs on the fronts of the head, legs and feet are the shortest and the longest on the neck and front chest. The hairs on the ears are long and preferably wavy. The legs and tail have light feathers on the back side. Drentse Patrijshonds only comes in an acceptable color combination, predominantly white with brown markings. These scars are usually of large size but ticks (small spots) are also acceptable. Roan dogs or dogs with a solid mantle are acceptable but not desirable. All Drentse Patrijshonds should have brown marks on their ears and their eyes.

They are heavy sheddars, prone to allergies and not recommended for apartments

Drent's coat is considered "half-long", meaning that the hair on the body is shorter than the almost perfect curl, but has feathers on the neck, the back of all legs, and a bushy tail. Drugs such as Setters and Brittany have the same coat and are shed twice per year. Seasonal change is usually managed with a comb, followed by a pin brush, ending with a boar brush brush. Use a comb to get loose and bulk of hair, ready to come out. Follow with pin brush; This will work well for the rest of the people. At this point you are likely to go astray, and so the boar enters the brush. The boar will clean the bristles, and help distribute natural oils and make the coat nice and shiny. If the bristles turn white, move the brush outward and rub / rub the bristles on a stone - this is all you don't want in your home. It is also great for people who are allergic to dogs, as they are technically allergic to dog dander. By reducing dander on the dog, it makes it easier and more enjoyable for the dog to be around. Usually a brief weekly grooming session handles everything very well. In between shading seasons, you can leave it for a few weeks if your dent does not put a brush on you to pay attention.

Drent is known to be obedient, loyal and attentive, but on occasion, they can be stubborn and self-thinking. These intelligent dogs get bored with monotonous and repetitive activities. Perhaps Drent's greatest feature is his strong and innate eagerness to please his boss. Due to Drents slow emotional development and sometimes being obstinate on the character, a kind handler with a good attitude is essential. Theatricality and enthusiasm that can make a drent easy to train are the same qualities that may require prolonged training to achieve exam level obedience. Although the standard states that the dog is "naturally obedient", please do not think that this breed can go without training. The time and energy invested will prove to be worth the effort.

Drugs that require stimulation and regular exercise, regardless of the weather, are intelligent Hunting Dogs. They are amazing hiking companions, but are also suitable for cancross, or any "gorging" sport. Agility would also be good for agility, or other "action" sports where the mind and body are engaged. This breed is not suitable for sedentary lifestyles.

DPCNA recommends following the recommended guidelines for a high-quality dry food and adjusting the volume only as needed (such as an increase in activity should coincide with an increase in feed provided.) Parents must provide special diets Is not required. Some are able to eat on their own while others will eat as long as food is available. Clean, fresh water must be available at all times.

In broad strokes, the drent is a healthy breed. Certainly some individuals may suffer from any canine Maldives, but this is not representative of the breed as a common problem or health concern. From a genetic point of view, Drent has only a few hereditary diseases to know and monitor, to keep the incidence low. Drent's eye should be monitored for the following hereditary diseases: progressive retinal atrophy (PRA), dystichiasis, entropion and ectropion, persistent papillary membrane (PPM), and retinal dysplasia. Other diseases or abnormalities that have been found in dents are: hemophilia, hypothyroidism, cryptorchidism, hyperuricosuria, significant reactions to the bite / sting of poisonous pests and the absence of some teeth.

Like many breeds, hip dysplasia and elbow dysplasia should be monitored and all reproductive stocks examined. Combined dysplasia is influenced by genetics and the environment, so it is advisable to use care during periods of rapid development of Drents.

Among breed officials, epilepsy is considered the greatest current health hazard for dents. Nevertheless, the incidence rate is uncontrolled and unverified; The location of the disease is not located in Drent. The most common, but usually non-problematic, von Willebrand disease type-I (vWD-I) is. Despite the high incidence rate of carriers and affected dogs in the population, the drone does not present the disease clinically, despite what modern science has to say on the issue. Pav Print Genetics has studied this phenomenon and their findings were validated by Cornell University. Von Willebrand disease type-I has been detected by the Wind Print Genetics DNA Health Panel. While the disease is of interest, it is considered a very low risk for Drent, yet DPCNA is attempting to reduce the incidence rate in the North American population.