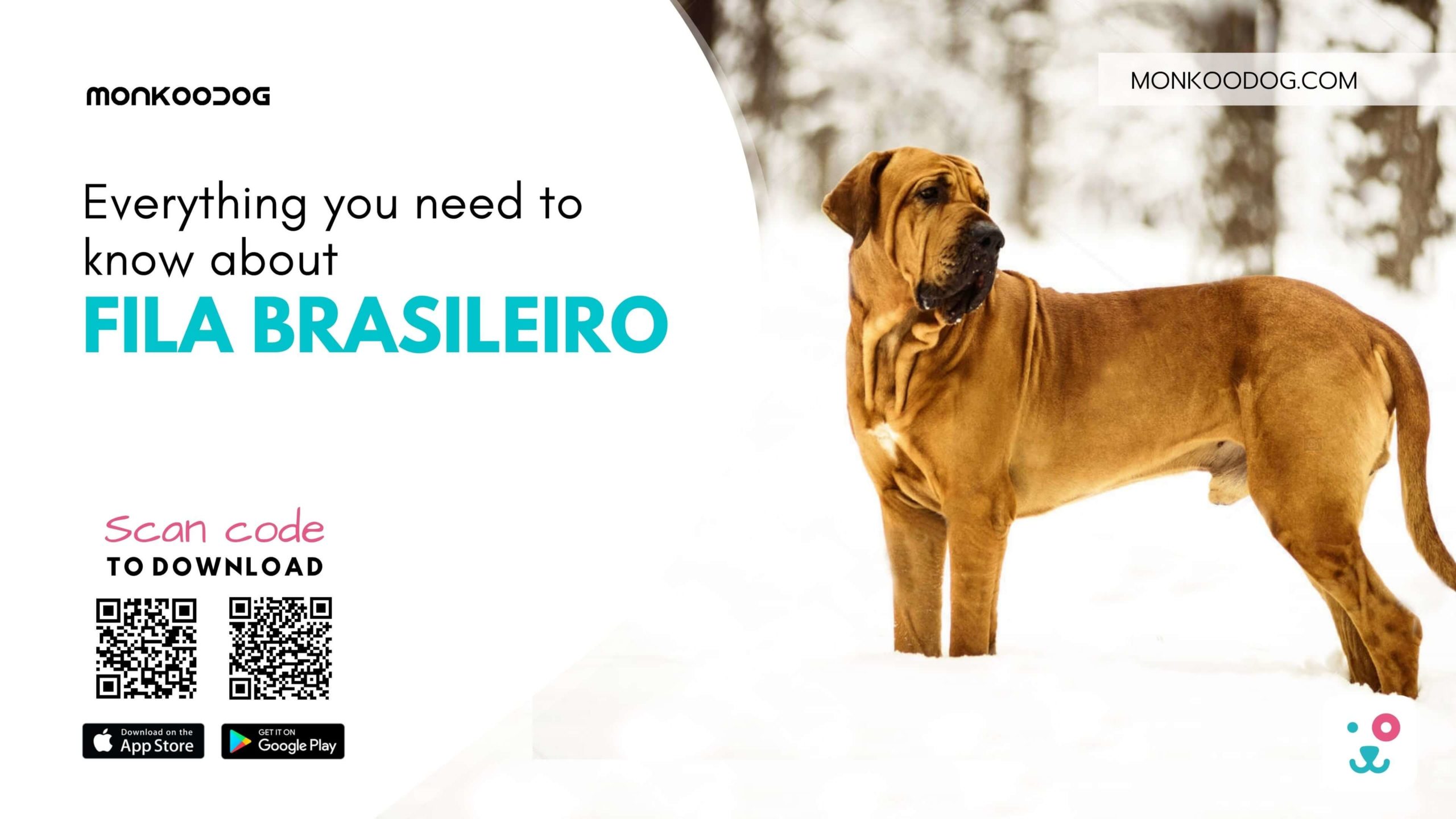 Home » Everything You Need to Know About Fila Brasileiro

Everything You Need to Know About Fila Brasileiro

The Fila Brasileiro is a one-of-a-kind working guard dog breed distinguished by its gigantic size, very thick and loose skin, and prominent topline. Despite being purebred dogs, they can still be encountered in shelters and rescues. The Fila Brasileiro combines the intimidating stature of a Mastiff and the enormous head of a scent hound.

They are indigenous to Brazil, where they were created to track down and capture any slaves who had fled into the deep, dark forest. and they were well suitable for the job. They were also utilized to chase off local predators and safeguard crops, animals, and families because of their adaptability and specialized duty.

The Fila Brasileiro is a dog breed with a troubled history. They were created specifically to track down slaves who had fled into the jungle in an attempt to avoid servitude. When the Portuguese colonists entered Brazil in the 1500s, they needed a method to regulate the slaves who farmed the land.

The Fila Brasileiro is said to have been formed by bringing the Portuguese Mastiff and the Portuguese Watchdog from Portugal. It is widely considered that, in addition to the Portuguese breeds, the Bloodhound was introduced to the mix for its tracking skills, and that the English Mastiff and now-extinct Old English Bulldog were included for their potential aggressiveness.

However, don’t be deceived by their little stature; they are fast and athletic dogs. They walk with a ‘camel gait,’ which means they walk with both legs from the same side at the same time.

Many breeders feel that the greater the size and weight of the Fila Brasileiro, the better. They typically weigh much more than 50kg, with some weighing in at over 80kg.

Their skulls are massive, with drooping skin. Their ears drop to the side of their heads and are pendulous.

Their features seem placid and dignified when they are at rest. They feature a rectangular body that is generally higher than it is long. Males are 65-75cm tall, whilst females are 60-70cm tall.

The female will be between 40 and 50 kilograms, while the male will be over 50 kilograms. Their croup must be taller than their back in order for their body to ‘bend upwards’ towards their tail, which is long and slender with a curled tip.

Many members of the breed have ‘dewlaps,’ or thick, drooping skin folds behind their neck. In fact, their enormous skin folds are a characteristic all over their body, giving them a distinguishing look. Their coat is short and thick, and the color is often black fawn or brindle.

According to FCI standards, the Fila Brasileiro’s coat can be brindle, fawn, or black. At times, a Fila may wear a black mask. White markings are not allowed in the breed, although they will not make your Fila less tenacious or dedicated.

Their coats are silky and short-haired, and they shed frequently. As a result, they are inadequate options for allergy patients.

A weekly brushing, combined with regular bathing, should keep your Fila Brasileiro’s coat in good shape. Filas do well in warmer areas, but this huge dog should not be left in extreme heat or cold.

Fila Brasileiro mastiff is a courageous and strong mastiff.  He is constantly looking for his master’s company. He has a calm demeanor, self-assurance, and confidence, and he is not troubled by strange noises or being in a new scenario.

Fila Brasileiro is an unrivaled property defender, and he is naturally drawn to hunt great animals and herd cattle. Some Filas may drool, particularly after drinking alcohol. Because it is both brave and fearful of strangers, this breed makes a great protection dog. It takes a dominant owner who understands the instincts of the alpha pack.

It gets along well with its human family and is a loving and caring companion. He is very devoted to his owner. Without a doubt, a Fila will protect you. That, he feels, is the reason he is here.

When you form a connection with your Fila, you and your family become his whole universe. You don’t need to teach your Fila in order for him to defend you; he does it on his own. It is in the breed’s DNA to be devoted and protective of his family.

They cherish their own children and endure a great deal of abuse from them. Filas are wonderful family pets because they are gentle, loving, devoted, and protective. They will also form relationships with other pets in your home.

Dominant Traits of the Breed

Proper socialization and knowledge of the breed’s traits are essential for successful Fila ownership. Don’t let this breed take over.

He must be handled by someone who radiates natural authority. Maintain your poise, assurance, and constancy. Dominance concerns will arise for passive owners

Many Fila supporters recommend postponing any socialization until the kid is four months old. When a puppy’s socialization is disrupted at such a young age, the dog’s attitude is molded, and the dog becomes an anti-social dog.

This is many Fila owners’ ultimate goal because it is the breed’s “trademark.” Many owners, however, have decided to socialize their Fila throughout its life. Socializing a Fila Brasileiro as a puppy does not guarantee that your Fila will appreciate human interaction.

It will show your Fila that not everything is a danger. It will increase his confidence and steadiness in his surroundings.

Because a dog’s diet may have a considerable influence on its health and lifespan, prospective owners should choose a dog food that is appropriate for the breed, size, age, and nutritional needs.

Your Fila Brasileiro puppy will need a large breed puppy formula. It must be strong in protein and specifically intended for puppies aged 18 to 24 months. Overfeeding your puppy may result in abnormally rapid development or weight gain, as well as future health issues.

This breed is prone to acid reflux (flatulence), however, you may alleviate this problem by providing a natural raw diet, though any good quality big breed adult dog food will suffice. Once your dog has reached full maturity, you can feed it one large bowl or two smaller bowls of food every day. Avoid overeating to avoid stomach torsion (bloat).

The Fila Brasileiro, which is frequently more active than other breeds of its size, benefits from long daily walks and access to a wide, secure yard to explore.

They are best suited to a rural lifestyle and should not be utilized in apartment buildings.

Without a way to channel their energy, dogs will develop unwanted behaviors such as frequent barking and property destruction.

While the Fila Brasileiro’s short coat requires minimal maintenance other than the occasional brush to remove dead fur, the other grooming responsibilities that are required should not be disregarded and should be introduced at an early age to avoid a fight with an adult Fila Brasileiro.

Also See:- Meet The Cutest Dog Breeds In The World 2021

Claw clipping, teeth brushing, and cleaning between the dog’s facial wrinkles are all tasks that should be started when the dog is young and more responsive.

They are affected by the majority of large-breed ailments. Hip dysplasia should be prevented at all costs. Because these dogs are prone to bloating, feed them two or three little meals each day instead of one large one.