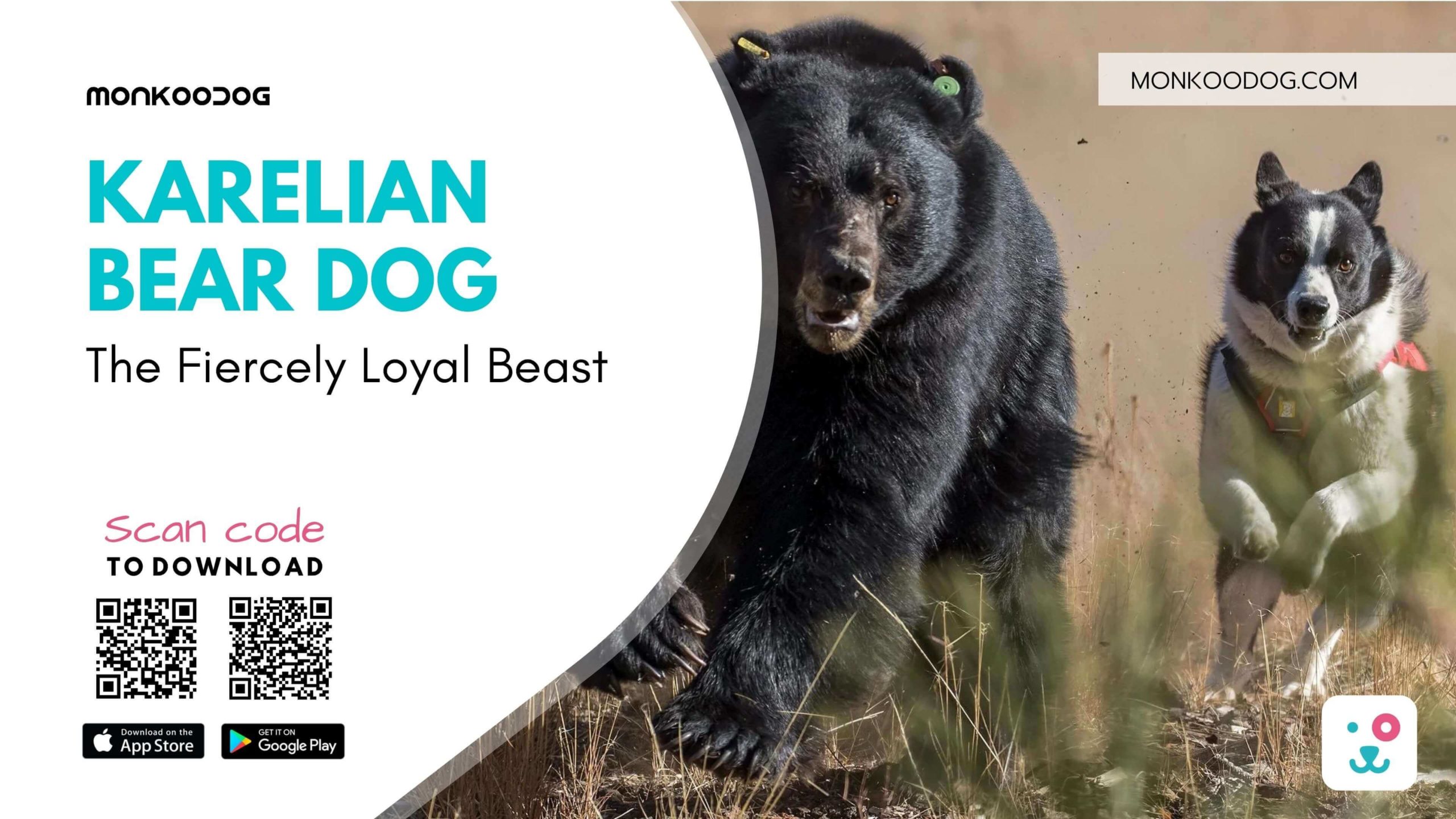 If you have ever looked for the most dangerous dogs in the world, the Karelian Bear Dog would always find its name on the list.

This strong, big and courageous dog is enough alone to send shivers down the spine. The wolfy appearance and fierce nature distinguish this hound as a not-so-cuddly dog.

Though, there is more to this independent spirit than they let show at first sight.

The loyal alpha is an impressive beast that will make you proud if you decide to parent them. Let’s take a look at a Karelian Bear Dog’s life.

The Karelian Bear Dog is a very old breed originating west of the Ural mountains. It is said that they were bred by the Komi people in Finland in ancient times.

These people lived by hunting and gathering. Karelian Bear Dogs accompanied them in this task.

This breed is so strong that two dogs could corner a bear and keep it there until the owners arrived to claim the prey.

Eventually, the breed spread around the area of Lake Ladoga and used to work as hunters hunting small prey like squirrels or mongooses.

Though, they are also capable of hunting big game including bears. That is where the name bear got attached to the Karelian Bear dogs.

When They Went Almost Extinct

The breed started to get selectively bred in 1936. After that, because of the Second World War, many Karelian Bear Dogs were killed and yet, many were let go into the wild.

Almost all the dogs of this breed today owe their origination to those 40 Karelian Bear Dogs of 1945. Though, today the breed is safe and thriving and is very popular in Finland. They are regarded as National Treasure in the country.

The physical formation of a Karelian Bear Dog exhibits power. It is a muscular and sturdy dog with a very athletic and agile body. Their average height goes up to 49-60 cm or 19-24 inches. They are rather long than tall.

Also See:- All You Can Learn About A Dog’s Health By Their Tongue Color Chart

They weigh around 20-30 kgs or 44-66 pounds. The she-hounds of the breed are slightly smaller though the difference is not apparent.

The breed has always worked in Finland as outdoor dogs in hunting activities or all the other outdoor activities. So, naturally, they have a thick double coat to be suitable for that profession.

The breed has thick hair that guards them against the extremity of weather, although the undercoat is soft.

All the dogs of the breed are black and white with defined markings. Rarely, you can also witness slightly brown shades in their coats.

Unlike ancient times, today’s common dogs are not very capable of surviving on their own in the sheer wilderness.

Karelian Bear Dog is a beautiful exception. They are perfectly capable of surviving in the wild without any human help.

When one adopts them as pets, their wild nature prevents their taming. They need early socialization and firm training to be able to adapt to the human company or they might turn out to be feral.

In the USA and Japan, the Karelian Bear Dogs have been successfully employed in bear control works.

Due to the traits this dog incorporates of hunting and attacking, they have a stubborn nature. That makes it very hard to train. If you are a first-time owner, they might not be suitable furry companions for you.

Though, if you take up the difficult task of adopting a Karelian Bear Dog, here’s a tip. Train them in short intervals and employ positive reinforcement. This way, you can prevent them from getting bored from practicing the same command many times.

The intelligence of these dogs makes them fast learners. They are exceptionally intelligent and observant. Their curiosity takes them towards learning and catching commands really fast. Though, a trainer needs to be experienced and confident in order to train such dogs.

The thick, coarse coat of a Karelian Bear Coat is not high maintenance. The coat of these dogs sheds all year. Though, you can minimize shedding by regular brushing and taking care of their nutrition. If you think you can stop the shedding altogether, that can’t happen.

Also See:- Groom Your Dog or Puppy at Home with This Basic Grooming Kit

You won’t find them drooling over your carpet. These dogs are very easy to groom with no mandatory visits to groomers required. Just take care of bathing them appropriately and keeping their coats clean and ticks-free. Their nails tend to grow very fast and sharp. You need to trim them regularly to avoid them hurting anyone.

The alpha of the canine world is very popular for its longevity and health. The healthy muscular hound lives a very active and powerful life. Though, common issues affect everyone.

Take care of their vulnerabilities like hip dysplasia and eye problems even though they are not very common in this breed. They live a healthy life of over 14 years if you take proper care of them.

You need to take care of their regular health checkups and ear infections. Regular vet visits are essential.

The ferocity of this breed doesn’t let them get a very high score on the family-friendly ranking.

Though, as these dogs are bred to be guard dogs and protective hounds, they have a naturally protective nature towards their families. The best part about these dogs is their loyalty.

If the parent takes care of socializing them at a very young age and exposing them to company, they turn out to be loyal companions.

Though, with even a little bit of carelessness, you might run into serious problems.

Friendliness to Other Dogs and Kids

Being a Parent to a Karelian Bear Dogs

If you have an apartment and you want to get a Karelian, it won’t be a good idea. These dogs are accustomed to outdoor living. If they don’t get enough open space, they might turn destructive and anxious.

They are not suitable for hot weather environments as they have very thick coats to protect them from cold. Also, being alone doesn’t suit them very well.

If you plan on having a Karelian Bear Dog, you can’t leave them alone at home very much unless you want to take the risk of utter house destruction.

Also, while taking them out to walk and play, it is better to always keep them on a leash.

If you can socialize and train these dogs, they are very lovable, very friendly, and very loyal companions. When you get past the negative traits, these hounds can act as perfect guard dogs for your house and farms.

They provide you with complete protection and loyalty. The big game hunter is a big heart winner and obviously impresses everyone with its limitless courage.

Also See:-Facial Swelling In Canines: Everything You Need To Know

PrevPreviousBoston Terrier Vs French Bulldog: Must Know Before Choosing
NextCaucasian Shepherd: Everything You Need To KnowNext