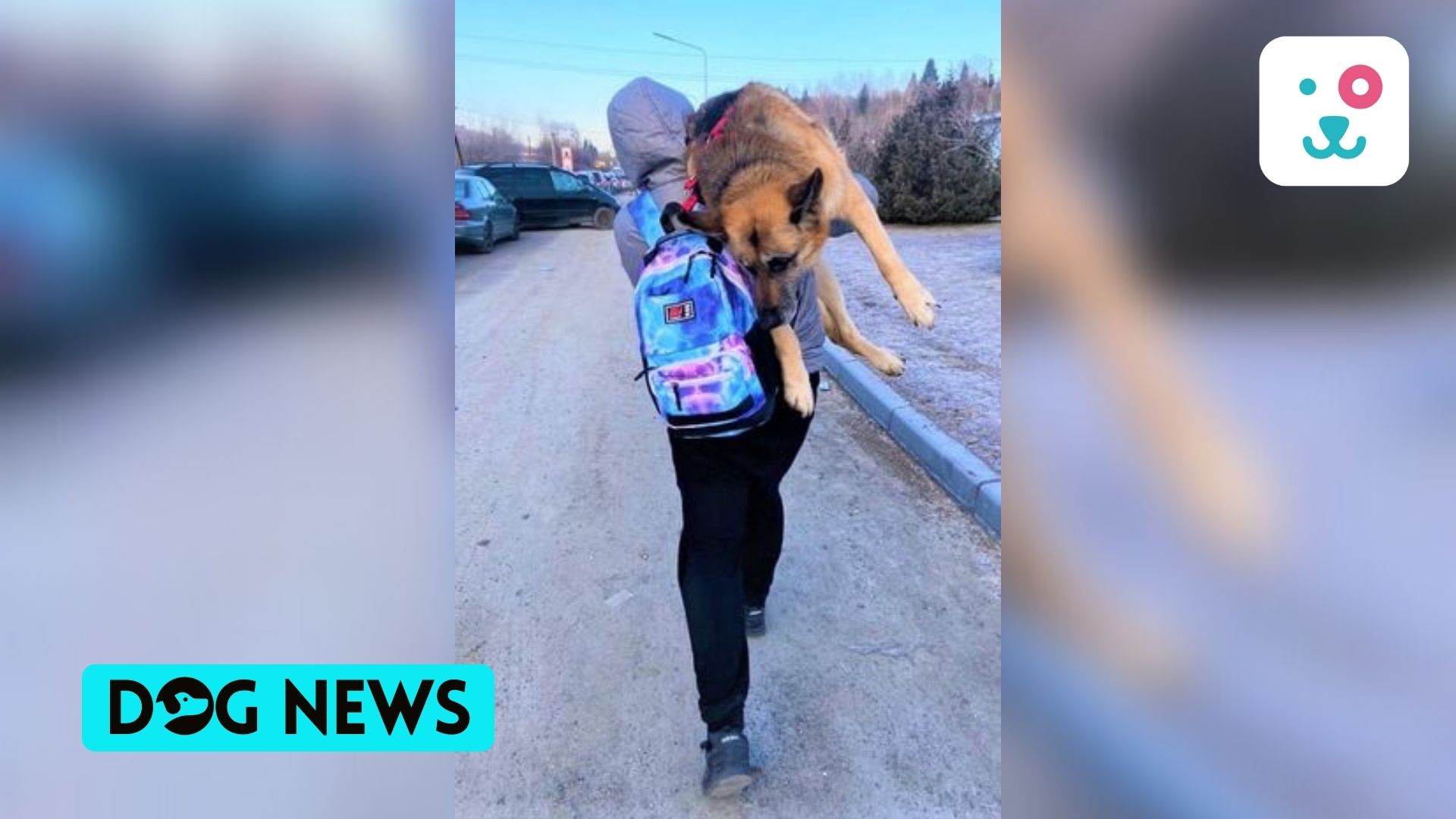 In the hard times of war, stories of love and compassion are circulating on the internet and affirming humanity’s faith in love. One such story of Pulya, the German Shepherd and her humans went viral on the internet. Recently, a picture went viral where a man can be seen carrying his dog on his shoulder walking the journey to cross the border of Ukraine to Poland.

After the picture went viral, the story behind it was recited by Alisa Teptiuk, 35, who took the picture of her husband, Dmytro, carrying their dog, Pulya, on his shoulder. Alisa is in Poland right now, with her family, in a temporary home as a war refugee.

Alisa and her husband are a family of five with two adults, two kids and one dog, Pulya. After the war broke out in Ukraine, Alisa and her family decided to leave the country for a safe haven in Poland.

She and her family along with her mother and her dog, Kolt, and her sister’s family got into a car to cross 90 miles which took them a 16 hours drive.

She says the journey was so difficult for them, emotionally and physically, and she had tears in her eyes but she had to hold them for the sake of her kids. After they reached the border, they had to take a 10-mile walk. It was minus seven degrees and the journey was so tough for them to take.

The dog had a tougher time than everyone

It was in this journey that Pulya started to get tired. The 12 and a half-year-old German Shepherd had a tough journey. She is not so young anymore even though she tried her best to keep going.

Alisa says that Pulya was 37 kilos when she started the journey, she is 35 now. Even though she walked a long way, she started to get really tired.

Dmytro got Pulya upon his shoulder and started walking. He kept Pulya up during the rest of the journey. Alisa says she took the picture at that time without thinking much. She just wanted to capture the moment.

Though now she sees that everybody is granting so much love and support to them and she is just glad that everyone is interested to know the difficulties they are facing.

People asked them to leave their dogs behind. Though, she says that they have had Pulya since the first day of her maternity leave. Pulya was 4 months old back then. She has been with them in their best times and their worst times. She is their family. There was no question of leaving her behind. They never even thought about it for a second.

After they reached the Poland border, Dmytro and her sister’s husband had to turn back to defend their homes as they were of the fighting age. Alisa says she is happy that she and her family are safe but she can’t stop thinking about her husband who is in the war-torn country. She also has left her father’s dead body in a morgue in Kyiv unburied.

Her father died on 23 February at the age of 59, a day before war broke out in Ukraine. They had planned a proper funeral for him, including booking the restaurants.

They were collecting the proper funeral documents from everywhere but at that time, sirens started sounding all over the city and tanks were moving all around.

When they went to get the last document from the registry office, the place had been evacuated. They couldn’t get it and had to leave her father unburied in a morgue.

She says once she gets back, she is going to give him a very good funeral, all that he deserves if he is still there when they get back.

With all that’s going wrong in their lives, Alisa says Pulya is the only thing that keeps her going.

Pulya stands as a symbol of love and devotion for her and she represents the life that they have left behind. In the midst of all this madness, Pulya is their only constant.

Pulya translates as ‘bullet’ in Ukraine. The story of this family and of other families who didn’t leave their pets behind fill one with the emotions of compassion and of the tragedies that war creates.

Also See:- Kerela Student Fights Hunger And Cold To Keep Her Dog With Herself In The Time Of War

PrevPreviousA social media celebrity vet got featured on GMA.
NextA video of a dog playing the piano and singing along with it went viralNext