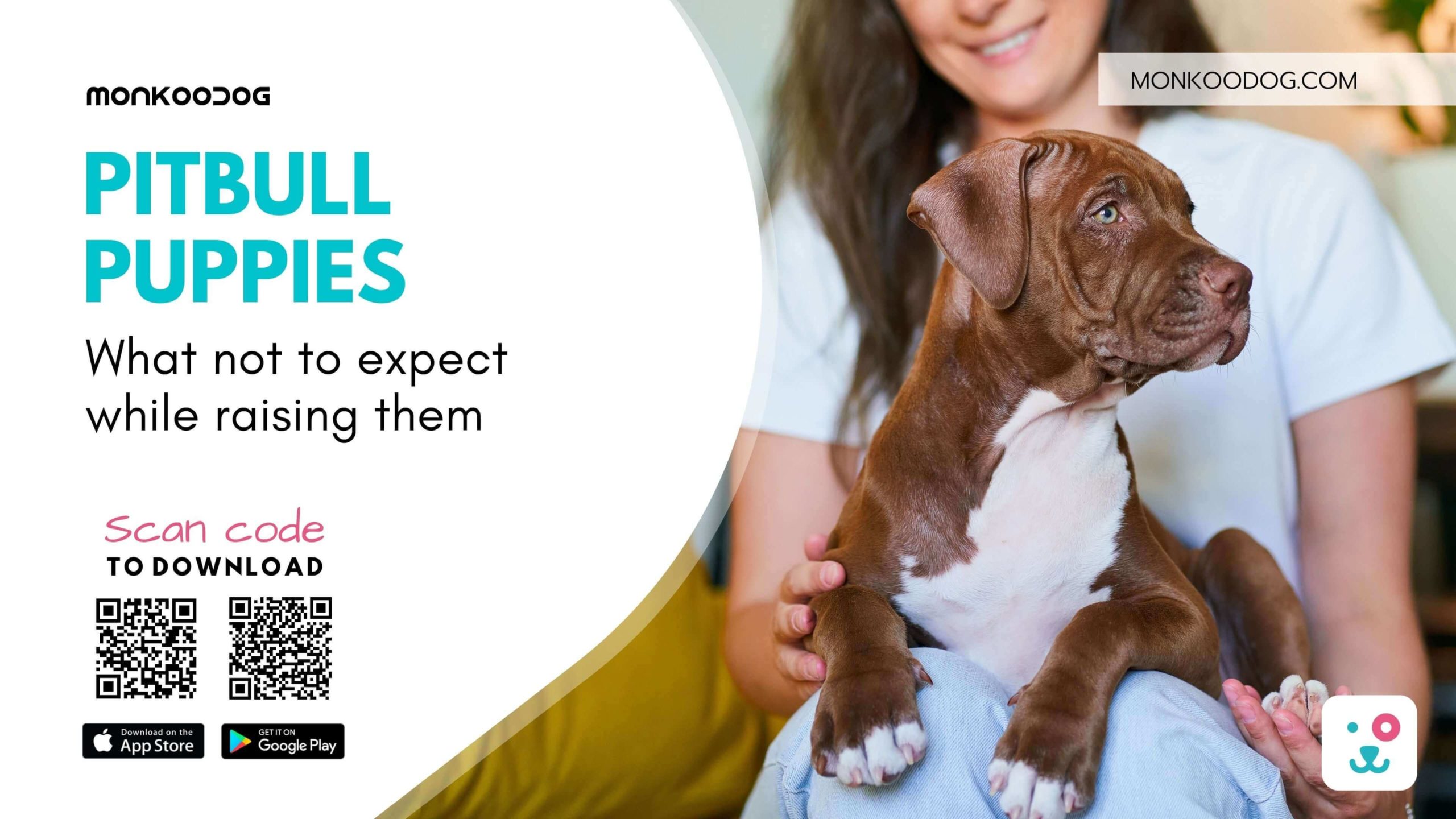 Pitbull Puppies are a notable breed defined by their strong, muscular appearance. Despite their intimidating look, they are friendly animals who are known for being people pleasers and thus like spending time with their owners.

Pitbulls are adored by the majority of their owners, and they have one of the best smiles around. Pit bulls are not only fiercely protective of their loved ones, but they are also fairly friendly. A pit bull puppy enjoys associating with both children and adults and enjoys playing all day, every day.

Pitbulls are said to have been developed in the United Kingdom as a mix between a bulldog and a terrier. People sought to blend the power of a bulldog with the agility of a terrier, therefore this was done.

They were popular in dog fights in the United Kingdom until animal welfare regulations made them illegal in the early 1800s.

This brief period in their history, however, appears to have tainted their reputation, prompting people to dread them, but this misperception is gradually dissolving.

The pitbull was employed to herd livestock when it first came to America. During WWII, they were also utilized as mascots.

A pit bull is a strong and powerful dog with a huge face that distinguishes it from other breeds. They have a big, flat head with a powerful jaw, small to medium ears, and a short, thin tail.

They have a lovely, short coat. Apart from that, pit bulls do not have a specific color pattern connected with their breed.

They are available in a range of colors, from steel grey to white with brown dots.

The kind of bulldogs and terriers that are combined with the breed determines all of the color variations.

How much your pitbull puppy grow depends largely on the type of pitbull you have. The male pitbull puppy is usually slightly bigger than their female counterparts.

A pitbull’s confidence is obvious just by looking at him. While this might be advantageous, it can also make children stubborn, especially if they do not want to do anything. They are also quite curious and like sniffing and studying new things.

Pitbull puppies enjoy being around people and are usually ready to please. As a result, they are not always suitable as guard dogs.

They are excellent family pets but keep in mind that they may be rather passionate and lively. As a result, they may be a little harsh. As a consequence, keeping a watch on them while they’re around tiny children is a smart idea.

Pitbulls are devoted companions that will defend their owners in any scenario. Because of their love, they are also quite protective.

Because of their muscular frame, Pitbull puppies are incredibly athletic. They can easily go on a hike, swim, or run. So you must also ensure that they remain active otherwise, they can grow agitated.

Pitbulls like playing and having a good time. In fact, you’ll see that each of their features motivates them to pursue a range of interests. This gets more noticeable as they age.

Brushing is one of the most critical grooming tasks for a pitbull puppy. This will assist them in removing any loose fur, dead skin, or other particles that are bothering them.

Brushing will also increase circulation in their body, resulting in lustrous, healthy fur.

Pitbulls should be cleaned at least once a month. This will aid in the removal of particles from their fur and the maintenance of their cleanliness. Apply a gentle wash on their skin to avoid any potential irritations.

This is due to the fact that many Pitbulls suffer from allergies, which can cause their skin to become extremely sensitive.

Pitbull puppies’ nails grow quickly, leading them to bend. This may cause your dog to scratch himself or herself as well as others.

Long nails may also collect dirt, which may include pathogens. Keep them trimmed before they become an issue to help avoid this.

Another prevalent issue in Pitbulls is ear infections. If you do not examine and clean their ears on a regular basis, they may get dangerous infections.

To eliminate dirt, use a clean cotton ball and ear cleaners that may dissolve and remove bacteria. However, never probe your pet’s ear canal since this may drive bacteria deeper into the ear and perhaps impair your pet’s hearing.

It is critical to socialize your pitbull puppy so that he or she is not fearful of people or other dogs. Allow them to mingle with other canines and meet new people.

Take your dog to a crowded park where he or she may interact with other people and animals. If your Pitbull is one year or older, socializing may be more difficult, but it is not impossible. Simply surround them with other canines or arrange for close friends to meet them.

Getting a pit bull puppy used to walk on a leash is unquestionably useful. Because they are motivated by prey from their ratting background and a mix of terriers, even well-behaved Pitbulls may become distracted.

This is a fantastic opportunity for your pitbull puppy to socialize while on a leash. This teaches them to play politely and not to run away when they see something they want to grab.

Pitbulls are prone to hip dysplasia since they are large, stocky dogs. This can ultimately cause their hip bone to deteriorate, making walking difficult and potentially developing arthritis.

Pitbulls are prone to cardiac problems because the valves around the heart do not usually develop properly.

This might lead to a number of cardiac problems, such as irregular heartbeats and even heart disease.

Cataracts are also a possibility with this breed. A doctor will usually do a genetic test to determine whether your pitbull puppy is predisposed to eye issues like this.

Parvovirus is a major health risk that can result in bloody vomiting, diarrhea, and severe dehydration. Because this virus spreads through the environment, the vast majority of canines will be exposed to it.

Pitbulls tend to be more susceptible than other dog breeds. As a result, until your pitbull puppy is roughly 16 weeks old, he or she should be vaccinated and kept away from public venues such as dog parks.

Pitbulls can develop severe allergies as a result of contaminants in the environment or their food. This might cause them to itch constantly and possibly develop red, scaly skin. Ear infections can also be caused by allergies.

Pit bulls are terrific family pets. They are known to be kind and playful with youngsters and like being a part of a busy home.

They require several opportunities to expend surplus energy, therefore being restricted in an apartment with little space to move around may result in some destructive behavior.

Because a happy pitbull puppy is a well-trained pitbull puppy, introducing your pitbull puppy to canines and humans from a young age will prepare him for a happy and complete life.

Pitbull puppies will require a special diet as they would grow up to be a large breed. Growth rates and maturation ages vary by breed size, necessitating the use of a variety of nutrients and nutritional amounts.

They develop quickly and require more nutrients to guarantee healthy bones and joints. Do consult a veterinarian to come to a fixed staple diet for your pitbull puppy.

Pitbull pups are obnoxious. Mouthing suggests that they like using their mouth to explore the world, which includes licking, biting, and chewing. Although it is harmless and sometimes adorable in a puppy, it is vital to stop this habit.

If your puppy grows up and begins mouthing others, he or she may cause issues or cause harm to others. Stop playing when they start biting to dissuade them from biting. You may also offer them chew toys to keep them engaged.

Pitbulls are ideal for living in a home with a family. As previously said, they are renowned to be vivacious and nice to youngsters, and they like being part of an active household.

Pitbull puppies need plenty of opportunities to burn off excess energy, thus being cooped up in a small environment may result in destructive behavior.

Pitbulls are notoriously infamous for not being excessively possessive about their food. They can get into all kinds of fights for their food which is not only unhealthy but also reflective of bad behavior. Teach them early on to share their food so that it does not escalate into some sorry of a behavioral problem later on.

Because of the Pit Bull’s incredible strength and fearlessness, it is vital to spend adequate time socializing and training early puppies. The ideal owner is responsible and dedicated to ensuring that this dog is properly trained.

If you are a laid-back person, this is probably not the breed for you. All dogs ultimately need love and affection and not much so if you feel that you would not be able to provide the adequate amount of love and care, delay getting a dog in your life as it might have irreparable repercussions.