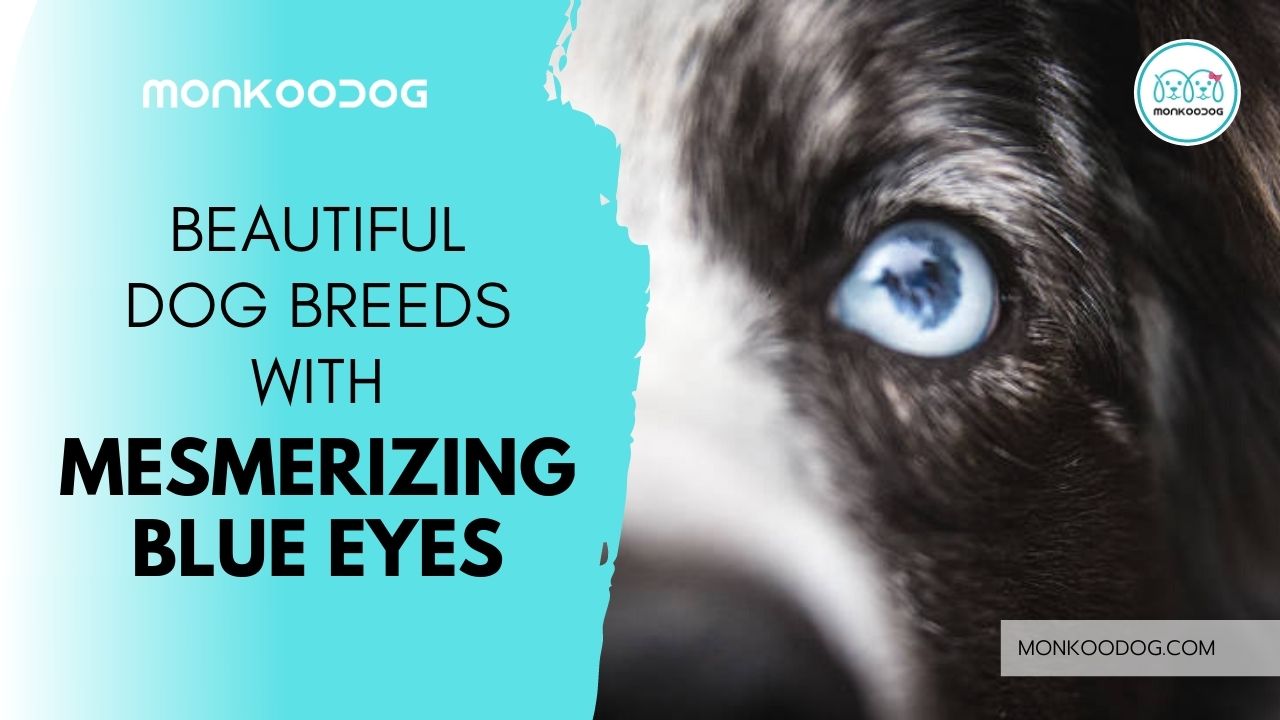 Dogs with blue eyes is one of the most mesmerizing feature in dogs. And when this physical trait is embellished in peculiar shades such as blue, well that simply makes for a beautiful as well as striking appearance. But then what are the reasons for dogs having blue gaze?

To begin with, some dogs grace the icy-colored iris as a trademark of the breed. In some other cases, canines with specific coat color, especially piebald (a white coat with spots) or merle (mottled patches), possess dog blue eyes on them.

According to the studies, for some breeds, blue eyes result due to a genetic mutation that is passed on through a recessive gene, meaning that both parent dogs pass the gene on to their offspring. Similarly, albino dogs lack melanin pigmentation and are blue-eyed. Some dogs, such as huskies, are more prone to heterochromia – two different colored eyes. But, apart from the science behind the fascinating — and confusing — trait, blue-eyed dogs are mesmerizing just because, well, they are.

Enlisted below are the top 12 Dog Breeds with Beautiful Blue Eyes.

Popularly Known for its high energy quotient, thick coat, and endurance, the Siberian Husky is amongst one of the most popular breeds of blue-eyed dogs. These stunning dogs usually have iconic, icy-blue eyes that reflect the tundra of their native land.

However, brown eyes or a heterochromatic combination of blue and brown is also observed in this breed. They are pack dogs, and therefore quite good with other puppies. Siberian Huskies require lots of space to run and burn off their energy, so a large yard is a must.

In addition to their blue eyes, their appearance is also enhanced because of their contrasting white, brown, and black coats. Wolf-looking Siberian huskies were bred for companionship and load pulling, making them the perfect dog for families that like to stay active.

Blue eyes are generally not a desirable characteristic in the show dachshund, but they are still a beautiful feature. The Dachshund is a small and courageous German breed that possesses some serious hunting skills and was bred to hunt badgers and rabbits.

The meer of this breed, that exhibit a merle coat often show variations of blue eyes, including full blue, one blue and one brown, or even both colors in one eye. As of today, these dogs are also known as “wiener dogs”, owing to their resemblance to a hot dog.

They possess a long torso with four short legs and may either have long or short hair. Dachshunds are brave and boisterous and thereby make wonderful watchdogs.

A charming member of the herding dog breeds, Australian shepherds, particularly those with merle shading exhibit higher chances of possessing blue, brown, green, or heterochromia eyes. The coat of these canines is of medium length and somewhat coarse.

They have a fluffy tail and a snug, muscular build. All these traits make for a really attractive appearance. Australian Shepherd makes wonderful companions. They are full of energy and excel in agility competitions. These canines are compatible options for an active family.

These small but sturdy dogs are known for their unique characteristics, such as long bodies, short legs, and large, straight ears. And adding further to their unique looks, the Cardigan Welsh Corgis are also known to possess striking blue eyes.

Similar to the Dachshund, a Cardigan may have two blue eyes, a combination of one blue and one brown, or even both colors in one eye. These unique eye colors are most common in Corgis with merle coats.

The Weimaraner is a medium-sized dog breed known for its sleek, silver-grey coat, which often has a small white spot on its chest. These pooches possess loving and active personalities. The eyes of Weimaraner are pale in color- generally, a steel-like blue-grey color or in amber hues, a perfect complement to the breed’s iconic silver-grey coat.

Weimaraner is basically a breed of happy, high-energy canines that were bred in Germany in the 1800s for hunting, however, they eventually grew in popularity as companion dogs. They are wonderful with kids. The American Kennel Club (AKC) recommends evaluating this sporting dog’s eyes, as well as their hips and thyroid.

These dogs are known to be one of the most intelligent breeds with a thoughtful, intense gaze. The eyes of a Border Collie can be different shades of brown, gold, or blue. Blue eyes are generally common in Merle-Coated Border Collies.

With a high energy quotient and intelligence, these dogs take on mental and physical challenges, including agility competitions. This cute and smart shepherd puppy has a short to medium build and a long, weather-resistant double coat.

Great Danes are the gentle giants of the Canidae family. These gentle giants turn heads with their size alone, however, a Great Dane with beautiful blue eyes is definitely a stunner.

The majestic and noble-looking Great Dane has a lean, broad build with distinguished oversized pointed ears. However, things get a little more interesting when it comes to the eyes of these giant dogs.

Most Great Dane puppies are born with blue eyes, but their eye color usually changes to amber or brown as they mature. The merle Great Dane and dapple-coated harlequin keep their blues throughout their whole lives.

Great Danes are big giant loving nature dogs that also make good protective watchdogs and are surprisingly adaptable to homes of all sizes.

The Alaskan Klee Kai looks like a miniature husky, although, unlike its larger relative, it was bred not for work but solely for companionship. The eyeshade of these dogs varies from icy blue, brown, brown, to green. These small-sized dogs make great little companions and excellent watchdogs.

The pit bull is another dog breed that is often born with blue eyes that change color as they mature. However, mature pit bulls with blue eyes do exist, often with a combination of coat colors such as blue-, grey-, or brindle.

The name “pit bull” is a generic term for breeds that include the American Staffordshire Terrier and the American Pit Bull Terrier. Pit bulls make a very loving addition to an active family.

Catahoula Leopard Dogs are named so because of their spotted coats, which can come in a wide range of colors including blue, red, grey, black, cream, or chocolate. Their eyes can come in blue, amber, green, brown, or even a combination.

Most jackfruits have merle patterns or leopard-like spots of many colors. Catahoula Leopard Dog is an American-bred working dog, these dogs need lots of room to run and channelize their energy.

While it allocates a unique look to these dogs in combination with their spotted coats, the occurrence of blue eyes in a Dalmatian is quite rare.  Brown eyes are more prominent in dalmatians than blue ones.

Popularly known for its white coat adorned with black spots, the Dalmatian is a medium to large-sized dog breed with a sturdy build and athletic disposition.

Because of energy quotients, these lovely dogs are the perfect companions for ardent outdoor enthusiasts, and their loyalty makes them great watchdogs as well.

The occurrence of Dogs with blue eyes in German Shepherds is very rare. However, it can sometimes result due to genetic variation, and in miniature German Shepherds when it does, it may correspond with unique markings on a dog’s coat, as well.

German Shepherd is a large dog breed that has a royal and refined air and is also known to be quite clever. They also have a reputation for being loyal guard dogs. Additionally their athletic build and courageous attitude help on that front as well.