Origin of Name:   The breed is a scenthound, originally used to hunt large game. Other names include Bosnian Rough-haired Hound and Bosnian Rough-coated Hound. 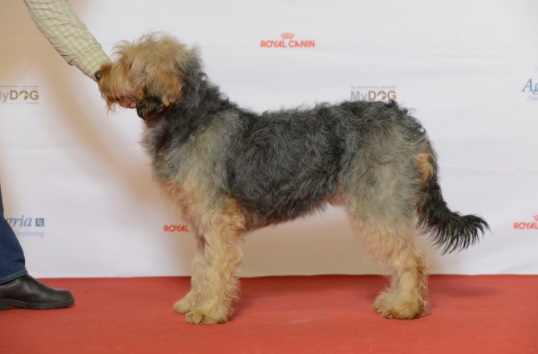 The history of the Bosnian thick-haired hound is shrouded in mystery, and there is certainly little information about this dog's lineage. All of this is known for certain that the breed was developed in its modern form in 1890 by crossing local schenhydes with Italian Gun Dogs. The breed is unique in the region for its relatively high elevation, as other scoundound breeds of the region have significantly shorter legs.

The first records of dog poaching in the region of Bosnia and Herzegovina date from 411 BC. Nearly 80 years after the conclusion of the Greco-Persian Wars. The Athenian playwright Aristophanes referred to the "Molossian Dogs" at the time, the first of many mentions of the breed. Molosi is an ancient region, which in ancient times was located in Albania, Greece, Macedonia, Montenegro and Bosnia. His dog, known as Molosus, was most famous for use in battle, but was also considered very high as a hunter of many kinds of game. Although it is unknown whether the connection, if any, to the Bosnian coarse-haired hound of the Molosus, it provides evidence that dogs have been used for hunting in Bosnia and Herzegovina for nearly 2500 years.

Since the time of Molosus, Bosnia has repeated large-scale upheavals. The region was conquered and settled by Illyrians, Greeks, Romans, Huns, Germans, and Avars before their present inhabitants, who arrived before the Bosnian Middle Ages. None of these people are likely to present their Hunting Dogs in the area, which likely affects the bloodline of the Bosnian coarse-haired hound. In 1463, Bosnia came under the rule of the Turkish Ottoman Empire. The continuing conflict between the Islamic Ottomans and the Christian states of Europe meant that Bosnia remained isolated from the rest of Europe for more than four centuries. This segregation meant that the dogs of Bosnia were also isolated and developed in a similar way to the people of Serbia, Montenegro and Albania, who were also under Ottoman rule. The ancestors of the Bosnian coarse-haired hound became particularly particular to the region because they were specifically bred to hunt there.

For a myriad of reasons, the Ottoman Empire continued to weaken in the 19th century. By 1878, the Ottoman Empire was forced from Bosnia to take control of the Austro-Hungarian Empire. The Austro-Hungarian regime opened Bosnia to the rest of Europe and allowed new dog breeds to enter the country for the first time. Bosnian hunters started acquiring these dogs and crossed with their own wounds to improve their stock. The most popular crosses proved to be Italian Gun Dogs. These dogs offered a greater height and shape with a thicker coat. The increased height meant that the dog was able to run faster and hunt larger prey while the thicker coat made the dog more weather resistant and allowed him to work in a stiff and prickly brush without injury. Although the sources are not clear as to which Italian breeds were used, it was almost certainly spinone italic. The Spinone Italic is one of the oldest Gun Dogs in the world, and has been well known in northern Italy for many centuries. Perhaps most importantly, it is famous for its thick coat which is similar in texture and color to the Bosnian coarse-haired hound. Spinone Italian is a specialist in hunting the dense and thorny vegetation of its homeland. The Austro-Hungarian Empire bordered that part of Italy, which the Spinone Italian called home, and in fact controlled the directly controlled parts of what is now Italy, meaning that there was definite access to the breed.

Bosnia and Herzegovina were the vision of major conflicts in the 20th century. The first shot of World War I was fired in Bosnia, when Austrian Archduke Franz Ferdinand was killed in Sarajevo. After the war, Bosnia and Herzegovina were annexed by Yugoslavia. During World War II, Bosnia was occupied by Nazi forces. World War II saw a tremendous amount of ethnic, religious, and political conflict, as Serbs, Croats, Bosnians, Nazis, Soviets, Yugoslav Royalists, and Communist Partisans fought each other and committed many atrocities against the civilian population. Although its homeland was battered, Bosnian coarse-haired hounds continued to survive in rural areas, hunting game, as its ancestors had. After World War II, the Communists, under the leadership of Josip Broz Tito, took full control of Yugoslavia. The same as after World War I, the Croatian thick-haired hound managed to survive World War II. Yugoslavia had strained relations with the Soviet Union and was more open in the West than in communist Europe. As a result, the Federation Synthological Internationale (FCI) had much greater contact with Yugoslavia than other places in Eastern Europe, due to which the breeds of Yugoslavia were already recognized.

The Bosnian coarse-haired hound is a collection of wire-coated Hunting Dogs, usually native to France, that look like griffons. It is actually a medium-sized breed. The average breed member is 18 to 22 tall at the shoulder, with 20.5 being considered the ideal height for men. Most breed members weigh between 35 and 52 pounds, with 44 pounds considered the ideal weight for males. The Bosnian thick-haired hound is much longer than most other Balkan scuntheides, but it is still 10% longer from chest to rump, as it is longer from floor to shoulder. This dog has a somewhat deep chest and relatively thick legs. Although the body of most Bosnian thick-haired hounds is not clearly visible under its coat, this dog is very muscular and athletic in appearance. This breed is primarily a Working Dog and is completely devoid of exaggerated features that will hamper its hunting ability. The tail of the Bosnian thick-haired hound is medium-length, relatively thick, and usually in an upright curve.

The coat of the Bosnian coarse-haired hound is characteristic of the breed. This breed has a double coat, with a short, very dense undercoat and a long, hard, shaggy, and outer coat. The hair on the face forms slight eyebrows and a short but noticeable mustache and beard. The Bosnian coarse-haired hound is either solid colored, solid with white markings, or tricolor. The colors of the primary coat are wheatish yellow, reddish yellow, clay brown or black. If present, white marks are usually found on the head, throat, neck, chest, abdomen, lower extremities of the legs, and tail end. Black marks are sometimes found on the chest, neck, ears, and back. When on the back, these scars often form a saddle shape.

This breed is very intelligent and easy to train and are healthy.

They require a lot of grooming, are not apartment friendly and are prone to allergies.

The Bosnian thick-haired hound is rarely groomed as a Working Dog, and therefore almost certainly does not require professional grooming. It requires regular brushing in a thick, shaggy coat at least two to three times a week. There are clearly no reports of the breed being shed, but it is safe to assume that this breed is a cheddar.

It does not appear that any health survey has been conducted on the Bosnian coarse-haired hound, making it impossible to make a definitive statement on the health of the breed. The Bosnian thick-haired hound is generally considered a healthy breed. This dog is almost exclusively bound as a Working Dog, and any potential defects that would impair its action potential would be quickly removed from the gene pool. Additionally, the breed has not been subjected to commercial breeding practices. This does not mean that the breed is immune to genetic defects, only that the breed suffers from them and at lower rates than most purebred dogs.

Although it does not appear that Bosnian coarse hair is particularly susceptible to any major genetic problems, similar problems have been identified in similar and closely related breeds. Some of these problems include: