Origin of Name:   Dogo cubano, Cuban dogge, Cuban bloodhound and Cuban mastiff are names for an extinct landrace or breed of domestic dog from Cuba. 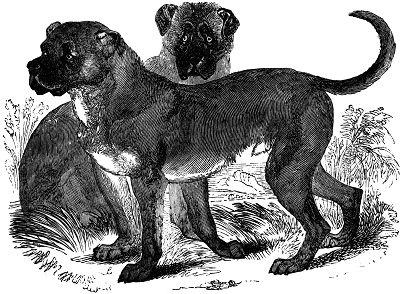 Dogo Cubano was a Mastiff-type dog originating in Cuba. The dog was a descendant of Spanish war dogs that later crossed with English mastiffs and scent. The breed had many different purposes, including livestock keeping, hunting of runaway slaves, and dog fighting. The breed reportedly went extinct after the abolition of slavery in Cuba. Not much is known about the breed to be sure, but there are many records of its existence. Dogo Cubano was also known as Cuban Mastiff, Cuban Mastiff, Mastin Cubano and Mastin de Cuba. There is some confusion about Cuba's relationship with the Bloodhound, with some sources treating them the same breed and others differently.

Dogo Cubano was a member of a large family of dogs collectively known as Mastiffs, Molosers, Dogs, or Allants. The family is one of the oldest groups of domestic dogs, although their history is incredibly disputed. Some claim that they were descended from the ancient war dogs of Egypt and Mesopotamia, and were later spread across the Mediterranean Sea by Phoenician and Greek merchants. The most common story to their origins is that they are descendants of Molosus, afraid of the war dogs of the Greek and Roman armies. Others believe that they are descended from the Tibetan Mastiff and introduced into Europe by the Roman Empire. Many other researchers believe that they are descended from Pagans Britannia, the giant war dog of Britain's Pre-Roman Celts, which is traditionally associated with the English mastiff. It is also commonly claimed that the Mastiff is actually descended from the Alount, a type of Caucasian Overachka kept by the Allan tribe of the Caucasus Mountains.

Although mastiffs were introduced in Western Europe, they became widespread. These dogs became especially common in England and Spain. Both countries prohibited Mastiffs as war dogs, guardians of property, and fighters in blood sports. There were at least two major varieties of Mastiff-type dogs in Spain, the Mastin and the Alano. Mastin was big and slow moving. This breed was commonly used as a livestock and property protector, but also as a war dog. Alno was shorter, faster and more aggressive. This type was used primarily as a catch-dog and combatant in the game of blood, although it was also a dangerous beast of war. Both of these breeds existed in Spain at least since Roman times, and possibly even earlier. In 711, much of Spain's Visigothic kingdom was conquered by Islamic Moors from North Africa, leaving a few pockets of resistance in the Northwest and the Pyrenees Mountains. Shortly thereafter, a small number of Christian states led by Asturias initiated Punarquista, a series of crusades aimed at driving the last of the Muslims from the Iberian Peninsula. Christian states made extensive use of mastins, allants, and galgos españoles (Spanish greyhounds) during the Reconquista. These breeds were extremely effective before gun powder became common use. They were used to attack enemy foot soldiers, and all three dogs earned a reputation for extreme courage and speed. Resonquista took more than 700 years to complete, and did not surrender until the end of the last Islamic stronghold of the Kingdom of Grenada on 2 January 1492. This meant that Spanish war dogs were still extremely aggressive when the first mission to be discovered was the New World.

The Dogo Cubano was generally similar to other Mastiffs, although it was still quite different. Most sources claim that the breed was intermediate in height between the Old English Bulldog and the English Mastiff, meaning the breed would stand between 20 and 22 at the shoulder. The breed was said to be incredibly heavy for its height, and most sources claim that it was the heaviest of all dogs. The breed apparently weighed 300 pounds or more on average. If so, this dog was probably the heaviest breed in history. This weight was gained largely through immense bulk and thickness, although the breed was also extremely muscular and powerful. Most of the paintings show a dog with a mastiff with thick, straight legs and a long, straight back. The tail of this breed was obviously quite variable. Some were very long and taping, while others were quite short with a pronounced curve. Dogo Cubano's coat was quite short, as a dog was given a native form of Cuban baitfit. The breed was said to come in a variety of colors, but the most common was probably a greyish brown.

The chief of Dogo Cubano was said to be an intermediate between other mastiffs and aromatic wounds. The presence of each individual dog was probably quite different depending on the relative amount of mastiff and blood in its ancestors. The head was apparently relatively square, and a huge fleshy one. The breed had a medium-length muzzle that was quite different from the rest of the breed's face. The muzzle had a slight upward curve and ended in a large nose. The muzzle was very wide, giving the dog a very powerful bite. The dog had very large teeth, but it is not clear whether it was a specific molluscar bite or a predator-level bite. The breed had very clear jowls and had a fairly wrinkled face, although apparently somewhat shorter than the English mastiff. Dogo Cubano's ears were dropped from close to his head, but occasionally (though not usually) cropped.