Origin of Name:   Icelandic Sheepdogs are tough and energetic. 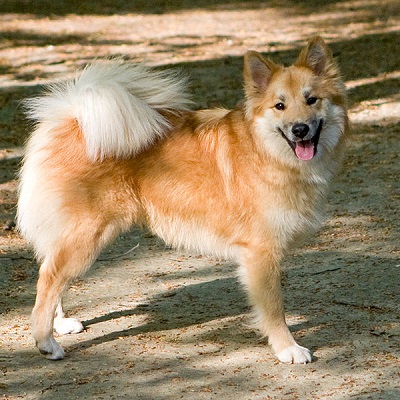 History suggests that the Icelandic Sheepdog is one of the most ancient and domesticated dog breeds. Although very few documents exist from the time when Iceland was first inhabited, the 1000 year old folklore and legends tell of a great and loyal canine companion, the Icelandic Sheepdog. The Icelandic Sheepdog is the only dog ​​native to the island of Iceland. It is one of the oldest dog breeds in the world, and due to the separation of its country's cold Nordic landscape, Iceland's sheep evolved differently from other breeds that migrated to the island. Through centuries of development and natural selection, the Icelandic sheepdog adjusted and adapted to Iceland's harsh climate and difficult terrain. The breed also adapted well to the methods of early Icelandic farmers, making Icelandic sheepdogs an important and much-needed companion and companion to the early livestock farmer. The hard-working nature of the breed, and its dedication and loyalty to its human companions was highly revered by the people of Iceland. So valuable and revered was this breed, that archaeologists have unearthed several tombs containing the bones of these treasured dogs, showing that the honor of burial was appropriate for these dog members of ancient society as well.

The extreme climate and weather that existed in the country of Iceland for centuries created many difficulties for the people of Iceland. In the 10th century, oppressive environmental conditions caused widespread famine in the country, with such severity that extreme measures of killing dogs for food were employed to sustain human life. Dogs with the strongest character, intelligence, and health spared the tragic fate of becoming dinner, and those who remained after the famine produced strong, healthy and resilient races of native Icelandic dogs; Able to withstand the challenging climate and terrain of your country with ease

The head of the Icelandic sheepdog is solid and well built, as the muzzle is smaller than that of the skull, giving the breed a triangular shaped head when viewed from the top or sides. The slightly domed skull gives way to a different halt, but one that is not too much or is very civilized. The skin of the face is close fitting and tight. The muzzle has a strong and precise nasal bridge that is in a dark, dark brown or chocolate colored nose depending on the color of the dog's coat. Flat cheeks and tight-fitting black lips are seen in the Icelandic Sheepdog breed (lip color may vary slightly; however, depending on the color of the dog's coat). The teeth show a scissor bite and entire teeth.

The ears of the Icelandic sheepdog are shaped and typical prick-style which is common among the Spitz family of dog breeds. True and extremely mobile, the ears are triangular in shape, similar to the head, with rounded tips. The ears are very reactive about the dog's sounds, and show the dog's mood easily. The Icelandic Sheepdog is a confident and lively companion. The dog's expression is curious, intelligent and kind. The breed's keen eyes reflect its curious appearance. Dark brown, the eyes are almond shaped and the rims are black, giving an intense and beautiful expression to the Icelandic sheepdog.

The neck of the Icelandic Sheepdog is strong and of medium length. It raises the head high, and proudly, and is slightly arched, leading into well-built, bent shoulders. The strong front legs are straight and so on. The topline is level and controversy. The back is muscular and powerful, supporting a chest that is well sprung and deep; The depth of the chest is equal to the length of the foreleg. The abdomen has fainted ever in a broad and powerful lion.

The hydroquarter is similar to the façade in which the legs are parallel and strong. They give way to legs that are well developed with strong pads and oval toes that are adequately arched and pass together. Dew claws are common in the Icelandic Sheepdog breed and may double on the fore or hind legs. The tail of the Icelandic Sheepdog is set high on the back and is typical of the Spitz family; A wolf-like feature that shows from its ancient reproduction that the dog's tail is thick and full is tightly folded at the back.

The Icelandic Sheepdog breed exhibits two types of coat, one being shorter and the other being longer. Both types are double coats with thick hair and feature a weatherproof feature. The double coat has a thick and soft undercoat with long outer hair. This double thickness of their hair protects the dog from the harsh Nordic climate in which the breed was developed. Both short and long-haired versions display thick guard hair with short hair, which is present on the dog's legs, face, and head. Deeply covered in hair are on the back of the thighs, neck and chest. The tail is bushy and covered with long, thick hair.

The color of the coat of an Icelandic sheepdog can vary. A color should be prominent with marking and additional color allowed. The main colors of the Icelandic Sheepdog coat are different shades of black, gray, chocolate brown and tan which can range from cream to red. White markings are always seen with the main color of the coat, and these markings may have different patterns. Typically, these white spots can be seen on the face, collar, and chest, as well as on the feet of the dog as socks. A black mask and black tips on the guard mask can often be seen in dogs with a light coat. Three-color dogs are sometimes found among the Icelandic Sheepdog breed, this is when the coat is black with both white and tan marks. Pied coaches are also allowed; This is where any variety of colors occurs on a white bacround. However, a predominantly white coat is not preferred for Icelandic sheepdogs. For show purposes, no trimming should be done to the coat as the dog must be displayed in its natural state.

This breed is a low drooler, easily adapts to chaning enviornment and is kid friendly

This breed is not the brightest, is prone to allergies and health issues

The Icelandic Sheepdog breed has significantly lower grooming requirements than other dog breeds that sport a thick double coat. Weekly brushing should be sufficient to keep the short or long coat free of tangles, mats and debris. The breed experiences a stroke of its coat twice a year. This is where the thick undercoat is completely shed. During these times of excessive shedding, regular brushing will be required to manage excessive traces of hair wherever the dog is left. Regular bathing is not required with this breed as it is relatively easy to keep the coat clean and healthy with regular brushing.

They should perform well on high-quality dog ​​food, whether it is commercially manufactured or prepared with the supervision and approval of your vet. Any diet should be appropriate for the age of the dog (puppy, adult or senior). Some dogs are at risk of being overweight, so watch your dog's calorie consumption and weight level. Treatment training can be an important aid, but giving too much can lead to obesity. Know which human foods are safe for dogs, and which are not. If you have any concerns about your dog's weight or diet, check with your vet. Clean, fresh water must be available at all times.

The Icelandic Sheepdog is a relatively healthy purebred dog. The Icelandic Sheepdog breed enjoys a long life expectancy of between 12 and 15 years on average and experiences some major health concerns. Some health issues have been identified in the breed; The most commonly seen is hip dysplasia.

Other less frequently seen health concerns for the Icelandic Sheepdog breed include: