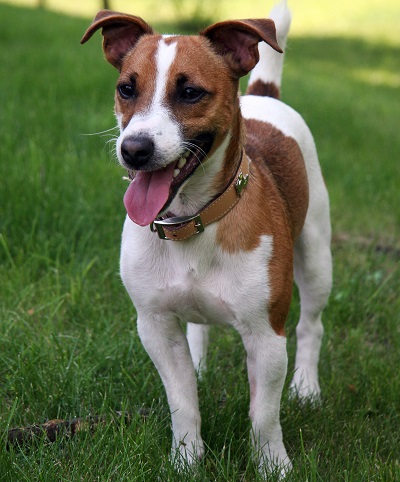 Jack Russell has a head and a muzzle that are well proportioned with the dog’s body shape. The muzzle should be slightly less than the length of the head. The snout of the breed is not too wide, and tapers slightly towards the end. There is usually a black nose at the end of the muzzle. A Jack Russell Terrier’s eyes should be almond shaped and dark colored. The overall expression of the Jack Russell terrier is one of energy and determination. Jack Russell Terriers are known for their distinctive ears. These ears are partially upright, but folded in the front. The ears are forward and usually high on the head.

Jack Russell Terriers must be predominantly white in color, and their coats must be at least 51% white. Most Jack Russell Terriers are probably close to 80% to 90% white. These dogs are most commonly white on their abdomen, legs, arms and tail. This breed usually has brown, tan, or black markings. Most dogs have only one color marking, although some may be triangular colored dogs. Brindle marking in the Jack Russell Terrier is unacceptable. The most common locations for markings are on the ears, above the eyes, and on the sides.

This is an excellent dog breed, does not require a lot of grooming and is a low drooler

This breed is prone to allergies, is not apartmnet friendly and sheds a lot

The Jack Russell Terrier has lower grooming requirements than most terriers. All three coat strands will heal with a regular and thorough brushing with a wire brush. This breed will not require professional grooming until it is shown. Rough and broken coated dogs should be stripped for the show ring. This does not mean that the Jack Russell Terrier is not a shader. In fact, this breed is considered a heavy cheddar. Rough coated Jack Russell Terriers flow with similar coats as most breeds, although not to the extent of smooth coated dogs. It has been said that the smooth coated Jack Russell Terriers shed heavily once a year, for only 365 days. Broken coated dogs shed an intermediate amount, depending on how their coat is. If you own a Jack Russell Terrier, you will have dog hair on your floor, furniture and clothing. If you or someone in your family is allergic or simply hates the idea of ​​constantly cleaning dog hair, then this is definitely not the ideal breed for you.

They should perform well on high-quality dog ​​food, whether it is commercially manufactured or prepared with the supervision and approval of your vet. Any diet should be appropriate for the age of the dog (puppy, adult or senior). Some dogs are at risk of being overweight, so watch your dog’s calorie consumption and weight level. Treatment training can be an important aid, but giving too much can lead to obesity. Know which human foods are safe for dogs, and which are not. If you have any concerns about your dog’s weight or diet, check with your vet. Clean, fresh water must be available at all times.

A common problem experienced by Jack Russell Terriers is known as leg perth. Leg pain is a foot disease in many small dogs. The disease is characterized by rapid degeneration of the femur and hip, resulting in osteoarthritis. This condition usually appears at an early age. This condition is quite serious and can cause intense pain and often lameness, as the dog is unable to put weight on that leg. Although the condition is irreversible, there are many treatment options.

It is always advisable to have your pet tested by the Orthopedic Foundation for Animals and / or the Canine Eye Registration Foundation, especially if you intend to breed. OFA and CERF test for various genetically inherited disorders such as blindness and hip dysplasia that may affect your dog or its descendants.

A list of health problems commonly found in the Jack Russell Terrier should include: