Origin of Name:   The Karelian Bear Dog is a Finnish breed of dog. 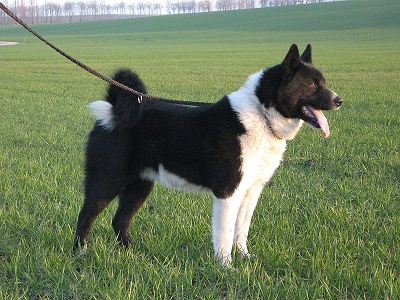 The Karelian Beer Dog is a medium-sized spritz with a thick coat. To hunt big, aggressive game by himself, his construction reflects his duties. He is a silent hunter, and barks once only to stop or breed the game. Working with an experienced hunter, he communicates the type of animal he has located with the sound of his bark. Although he can demonstrate self-control around people, his fighting feelings are around other dogs and can be difficult to handle. Their soul easily turns into aggression, as Karelian bear dogs love a challenge.

The Karelian bear dog is a Finnish breed that originated in northwestern Europe and was originally a dog of Russian and Finnish farmers, used for hunting and as a watch dog. Only the most difficult battles and harsh conditions when hunting. Early dogs had red, red-gray, and black-and-white coats. Komi dogs, also known as the dog of the zerines, are thought to be the origin of the breed, however, the original stock dogs originate from the Karelia, Olonets, and Russian Karelia of Lagoda, where they are all used for a variety of game hunting. Used to be done. Breeding was started in 1936 with the goal of creating a strong dog that barks in big game. In further breeding, the ancestor was selected for the Karelian bear dog type and only black and white dogs were preferred for breeding. It was then agreed that the breed was to be named Karelian Bear Dog. The first standard was established in 1945. The first Karelian bear dogs were registered in 1946 at the Finnish Kennel Club.

Today, the breed is one of the top 10 most common breeds in Finland. The Karelian bear dog is primarily a hunting breed, but in its country of origin it can be trained and competed for obedience tests, search and rescue tests, and sled dog tests.

The breed has a coat of straight, stiff guard hairs and a fine, soft, thick undercoat. There should be no curls in the hair at all. The color should be black with white markings. Often jet black hair is dyed a bit with brown highlights at the ends which gives it an iridescent quality. The ideal color percentage is about 70% black and 30% white. The bushy tail turns into a ring at the back in a circle and has a white tip. It gently falls on the dog's back or to one side. The tail of purebred Karelian Bear Dogs curves into a circle rather than a sickle. Black spots on the white part of the fur are considered a defect.

This breed is easy to train, are low droolers and excellent watchdogs

Beyond regular weekly grooming, occasional bathing will keep your Karelian bear dog clean and best looked after. Grooming can be a great bonding experience for you and your pet. Strong, fast-growing nails should be trimmed regularly with a nail clipper or grinder to avoid overgrowth, splitting, and breakage. Their ears should be checked regularly to avoid a buildup of wax and debris, which can lead to infection. The teeth should be brushed regularly.

As with all breeds, initial socialization and puppy training classes are recommended. This breed has a reputation for being difficult at home. However, in every other case, it is very easy to train them. For example, they like to do tricks and quickly learn new ones. They respond very well to training based on positive rewards rather than harsh or negative methods. This breed is required to live with its family and is likely to result in undesirable behavior if it is regularly left alone for long periods of time.

Exercise options include playing time in the backyard, preferably removed, orwax several times a day. Exercise can also come in the form of indoor activities, such as sneaking, chasing a rolled ball on the floor, or learning new tricks. Some outdoor activities such as swimming, hiking, and retrieving balls or flying discs can provide a good outlet for spending energy. If you live in an apartment, even a short walk in the hallway can give your dog some exercise, especially during inclement weather. Training for dog sports such as agility, obedience and rally can also be a great way to give your dog exercise.

The Karelian beer dog should perform well on high quality dog ​​food, whether it is commercially manufactured or prepared with the supervision and approval of your vet. Any diet should be appropriate for the age of the dog (puppy, adult or senior). Some dogs are at risk of being overweight, so watch your dog's calorie consumption and weight level. Treatment training can be an important aid, but giving too much can lead to obesity. Know which human foods are safe for dogs, and which are not. If you have any concerns about your dog's weight or diet, check with your vet. Clean, fresh water must be available at all times.

Working with a responsible breeder, those wishing for a Karelian bear dog can receive the education they need to know about specific health concerns within the breed. Good breeders use health screening and genetic testing of their breeding stock to reduce the likelihood of disease in their puppies.