Origin of Name:   The Portuguese Podengo, also known as the Podengo Português or Portuguese Warren Hound. 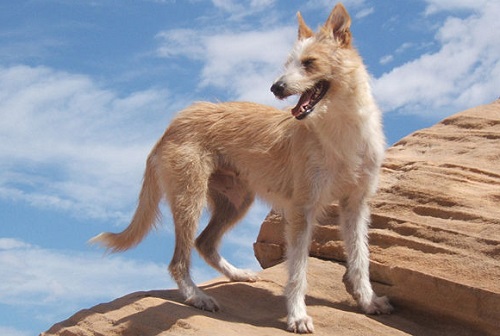 Podengo is a rugged courtyard hound that comes in two sizes: media (medium, 16 to 22 at the shoulder) and grand (large, 22 to 28 ). They also have two coat types: smooth and wirehair. Enthusiasts of the breed describe it as ""primitive"", namely, that it is a rustic, no-frills, untouched by fads and fashions dating back to the Iberian Peninsula era. Among their distinguishing features are large, straight, triangular ears; A pyramid-shaped head that goes up to the nose; And sweetly expressive, almond-shaped eyes.

Podengos are, in general, strange dogs who like to play. They easily entertain themselves with toys, chase each other and sting each other around the house and yard. They are highly intelligent and learn new things very fast. Since they are an observant dog, they are not easy and playful with strangers and may see small animals such as dogs and cats as prey. They can be quite reserved initially and prefer to greet strangers on their own terms. They are very tolerant and obedient, eager to please their family members and we fulfill most of the requests they make.

The possible origins of the Portuguese podengo date back to 600 BC with primitive, multi-purpose Hunting Dogs received, used and distributed by Phoenician traders and reaching Portugal in 700 BCE. This is evidenced by the artifacts found under the Lisbon Cathedral. Podengos were developed in Portugal in various sizes due to their functionality, the largest being Podango Grande, developed for deer and wild boar hunting. This will end the big game and await the hunter's gun. Podengo medio, being small, was used for rabbit hunting. Due to the relative isolation of Portugal at the western end of Europe, in contrast to the other two sizes, the medio evolved into its present form without much influence from other breeds and, as a result, has the most strongly established and homogeneous type and the greatest genetic stability. Three sizes. Medio embodies the authentic type of Portuguese podengo.

The Portuguese Podengo is one of the ten national dogs of Portugal and has the honor of being the symbol of the Portuguese Kennel Club (Clube Portugues de Canticura or CPC). Club du Podengo Portugues (CPP) is the national breed club in Portugal. Ironically, for this breed, which has evolved as a people's dog for the last 2,000 years in Medio and Pecino sizes, many members of Portugal's upper classes have been involved in efforts to preserve and improve the breed over the last 100 years , Who saw this and among the other nine indigenous breeds is an essential element of national conservatism.

The face and head of the Portuguese Podengo is very primitive. The head is lean, chisel and wedge-shaped. Some Pequenos have a rounded head similar to that of a Chihuahua, but most of these dogs have a flat skull. This breed has a relatively long head which blends into the muzzle very easily. The muzzle is also quite long, but not as long as the skull. It is usually wider at the base and then somewhat stronger towards the end. The muzzle has tight-fitting lips and ends in a nose which should be darker in color than the rest of the coat. The eyes of this breed are almond shaped, oblong, and range in color from honey to amber brown. The ears of this breed are some of its most distinctive features and are fully erect, but pointed to the sides. They are quite large in shape, triangular in shape, and end at a fairly pointed point. The overall expression of most members of the breed is bright, lively and somewhat wild.

Portuguese Podengos come in two different coat varieties, a smooth and a wire. Smooth-coated has short, very thick and smooth hairs. The Wire-Coated has a medium-length coat that is less dense than the Smooth, as well as being rough and thick. The wire-coat forms a distinctive beard and sometimes a mustache. All sizes of Podengo Portugueso can be found in any shade of yellow or fawn, from darkest to lightest. These colors can be either solid or with white markings. These dogs can also be white, with or without yellow markings. The Podengo Portugueso Pequeno also comes in two additional colors, which are acceptable but unfavourable in the show ring, black and brown. Pequenos can be solidly black or brown, gray or black with white markings, or white with black or brown markings.

This breed is apartment friendly, they are low droolers and require minimal grooming

This breed is the brightest, they are prone to health and allergy issues

Wirehair podengos will be flown in squares. It is important to brush regularly to remove dead hair. Smooth-coated dogs require slightly less grooming; A topical brush will suffice. Neither coat should be stripped. Beyond regular weekly grooming, the occasional bath will keep them clean and looking their best. Their nails should be trimmed regularly with a nail clipper or grinder to avoid overgrowth, splits, and cracks. Their ears should be checked regularly to avoid a buildup of wax and debris, which can lead to infection. The teeth should be brushed regularly.

Podengos will surprise and test the unreleased owner. They require firm training or will find their own adventures, but they are easily motivated by food and fun. To get the most pleasure from your podengo, pick up the most relaxing and tolerant podengo you can take with her in training classes and provide as much initial socialization as possible.

Podengos are great sentinels and companions. They are very playful and quick to learn, but are not always easy to train. Both size varieties are revered as versatile hunters and companions who use all their senses, as well as their agility, speed, and endurance, walking alone or in packs. The medium size is more intense and energetic than the larger one, which enjoys relaxing on the couch.

Podengo should perform well on high quality dog ​​food, whether it is commercially manufactured or prepared with the supervision and approval of your vet. Any diet should be appropriate for the age of the dog (puppy, adult or senior). A primitive dog, Podengo will hunt on its own if given the opportunity. Some dogs are at risk of being overweight, so watch your dog's calorie consumption and weight level. Treatment training can be an important aid, but giving too much can lead to obesity. Know which human foods are safe for dogs, and which are not. If you have any concerns about your dog's weight or diet, check with your vet. Clean, fresh water must be available at all times.

Responsible breeders screened their stock for health conditions such as food and contact allergies, hypothyroidism, and deafness. Since no health screening is done in the country of origin, any health test should be considered as a baseline for gathering information. The position of the American-origin club is one that favors testing for lights rather than elimination.